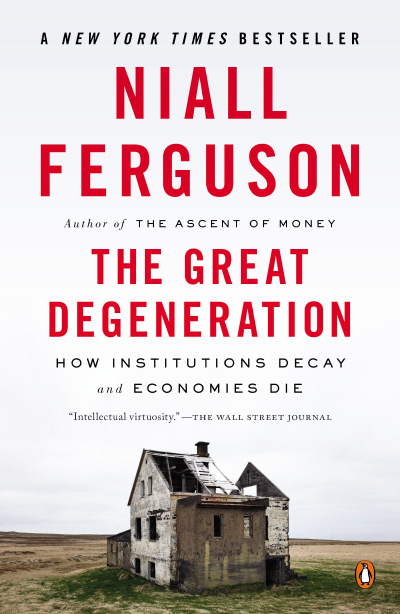 In their search to understand the rise and fall of local, regional, and national economies, economists have in recent decades focused increased attention on the workings and saliency of noneconomic factors such as values and institutions. On one level, this attention marks a growing recognition, at least by some parts (but by no means all) of the economics profession, concerning the limits of approaches based heavily on the mathematics and econometrics that continue to overpopulate so much of contemporary economics literature. But it also reflects many economists’ willingness to take into account the insights attained through other disciplines.

In his new book The Great Degeneration, Harvard historian Niall Ferguson draws upon a range of social sciences, including his own field of history, to develop what might be called an extraeconomic explanation for the slowdown in the rate of growth in many economies of North America and Europe. I say extraeconomic because economics forms a central part of Ferguson’s explanation of the growing sclerosis that manifests itself in the form of phenomena such as aging populations, falling long-term rates of economic growth, and the seemingly insurmountable inability of most Western nations to engage in substantive and lasting reform. Ferguson, however, is very clear that the laws of supply and demand alone do not constitute the only reasons, let alone the primary reasons, for decline. For Ferguson, it is all about institutions and institutional decay. “The Great Recession,” he claims, “is merely a symptom of a more profound Great Degeneration” (p. 10).

Though the book is a short one and written for a nonspecialist audience, Ferguson develops a very strong case to illustrate how the hollowing out of the rule of law, the deterioration of representative government into soft despotism, the increasingly crony-capitalist features of today’s market economies, and the ongoing implosion of civil society are now costing us dearly. Part of the problem, Ferguson makes clear, is that there is no easy fix to these particular problems. One cannot vote something like rule of law back into existence. A flourishing civil society does not simply spring forth ex nihilio. Unfettering the market from literally tens of thousands of regulations is no easy exercise and cannot be accomplished by the stroke of a pen.

In developing his argument, Ferguson begins by explaining just how bad the public finances of most Western countries are. The economic distress of so many nations in recent years, however, cannot be attributed, Ferguson suggests, solely to the relatively limited “deleveraging” that some countries have chosen to pursue in the wake of the 2008 financial crisis. Rather we find ourselves living in what Adam Smith called “the stationary state” in the Wealth of Nations. This state is characterized by two features. The first is terribly low wages for the majority of people. The second feature is what Ferguson summarizes as “the ability of a corrupt and monopolistic elite to exploit the system of law and administration to their own advantage” (p. 9).

Yet it is not enough, Ferguson claims, to think of this situation in terms of the different effects of “open” and “closed” sets of institutions, which is the way that many economists describe the reasons for institutional decline and success. Here, he maintains, “the historical approach reveals a point that is often overlooked” (p. 19). In this regard, Ferguson has in mind a type of comparative approach whereby one notices how some countries’ institutions seem to be becoming more conducive to growth, whereas countries whose institutions were once growth-friendly find the same institutions entering a spiral of decline from which it is difficult to escape.

As a side note, it is worth underscoring here that Ferguson understands institutions as part of but also rather distinct from culture. Institutions, he maintains, create incentives, whereas cultures concern norms (p. 28). Though the two are interlinked, failure to understand this distinction can lead those seeking the explanation for economic growth and decline to engage in what Ferguson describes as a cherrypicking approach whereby one associates certain elements of a given culture with, say, economic growth while ignoring the elements of that same culture that are unlikely to be conducive to growth. This is a potentially important distinction. I say “potentially” because it remains somewhat underdeveloped in this book, perhaps because Ferguson does not spell out in detail what he means by culture, though he plainly believes that ideas—religious, philosophical, and political—are central to what makes one culture different from another.

So how does Ferguson describe the institutional malaise that he fears is now undermining, perhaps fatally, more than five hundred years of institutional development in the West? On one level, it is about the deeply unhealthy relationship between debt and how we have now seen one generation using debt as a means of living off the future of their children and those yet to be born. That in itself raises the question, which Ferguson himself does not pose, of why one group of people views another group of people in such terms. At least part of the answer is surely moral and cultural, and it might have been useful for Ferguson to address this relationship.

It is when Ferguson starts looking at the institutional side of the equation that his arguments really start to gain traction with the reader. In the chapter titled “The Darwinian Economy,” Ferguson unpacks some of the myths about regulation and deregulation that have been perpetrated by (among others) his sparring partner Paul Krugman, who has held that much of the Great Recession was caused by deregulation, especially in the mortgage industry as well as in the banking sector via the 1999 repeal of the Banking (Glass-Steagall) Act of 1933. This account, Ferguson says, is “mostly wrong” (p. 31), not least because virtually everything that went wrong in the 2000s could just as easily have happened if Glass-Steagall had still been in place. Ferguson also notes that plenty of financial shenanigans have occurred in hyperregulated economies. And this in turn leads him to suggest that much of the 2008 crisis flowed from overcomplex regulation (to which, one might add, several thousand pages of new financial regulations have since been added in the form of legislation such as Dodd-Frank). This is a good example, according to Ferguson, of how institutional dysfunctionalism creates perverse incentives that encourage people to behave badly.

In the next chapter, on the legal system, Ferguson demonstrates how the existence of rule of law—which helps to explain so much of theWest’s economic success—is now under immense pressure from forces ranging from excessively complicated law to the increasing cost of law (the latter making low-cost enforcement of contracts more and more difficult and out of the reach of the poor and less rich). Such developments, he claims, are leading to a loss of institutional competitiveness by countries such as the United States.

From where, then, will reform come to resolve these institutional problems? Ferguson’s insistence that reform will not—and, in many ways, cannot—come from the political class is, in this reviewer’s mind, spot-on. It has to come from “within” society, or what many often call “civil society.” Here the influence of Alexis de Tocqueville’s thought on Ferguson’s views becomes especially apparent. Unfortunately, Ferguson points out, the associational vitality that so marked out America in Tocqueville’s mind as quite different from much of western Europe (especially his native France) has been in decline for some time. The breakdown in religious and secular associational life in working-class America also helps to account, Ferguson maintains (drawing from Charles Murray’s 2012 book Coming Apart: The State of White America [New York: Random House]), for the decreasing social mobility of this group. The associated decline of social capital means that people turn ever more to the state to try and fix so many of the problems that are created by an excessively large state and cannot be resolved by that very same state.

In concluding this book, Ferguson points out that the common thread in the growth of unaccountable elites, the explosion of regulation, the corrosion of rule of law, and the shrinking of civil society is the fact of the overmighty state. In this connection, Ferguson makes a convincing case that greater technical knowledge and development—not to mention what he calls “technoptimism” (p. 146) and what I call the techno-utopianism that, alas, seems prevalent in particular free-market circles—cannot solve this problem. The primary solution to the stationary state, Ferguson says, is a growing and bigger society, or what is often called “civil society.” The unanswered question is whether Western civilization, especially some of its current political leadership (they know who they are), is presently capable of this type of revival.

That problem is what Donald Rumsfeld might call “an unknown unknown.”