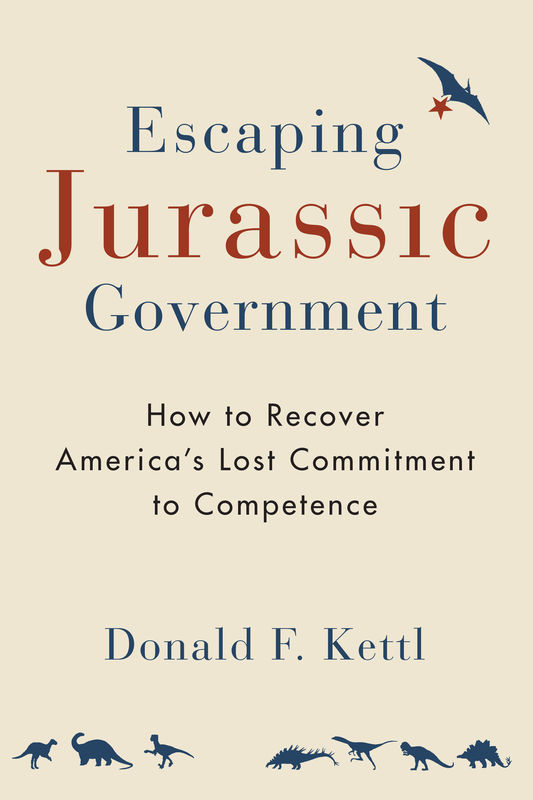 Escaping Jurassic Government
How to Recover America’s Lost Commitment to Competence
By Donald F. Kettl
Kindle Paperback
This book review is a web exclusive for the Summer 2017 issue of The Independent Review.

A few years ago, I was giving a talk to a “leadership club” at a large state university. There were nearly 200 fresh-faced self-identified “leaders,” the sort of person who not only went to Model UN in high school but who was elected Deputy Assistant Secretary of the U.N. and will manage to mention that fact in conversation within five minutes of being introduced to you.

I asked, during my talk, a simple question: “How many of you want to work for the government?” Pretty open-ended, inclusive. No one raised a hand. Not one person. I tried to sharpen the question. “C’mon. You can be an attorney, a scientist, an investigator, a spy. The government needs good people, and it can be interesting work. Anybody? Anybody?”

That’s changed quite a bit in my lifetime. When I was in graduate school, I knew a lot of people who wanted very much to work for government. I myself took a position with the Federal Trade Commission out of grad school; several of my uncles were soil scientists or rocket scientists, and worked for the U.S. Geological Survey or NASA. It seemed pretty interesting, it paid well, and it was high status among my southern redneck family.

Donald Kettl, a rightly well-respected scholar in political science and public administration at the University of Wisconsin, has written a book that is partly a diagnosis and partly a prescription for a particular problem. Although I think his view of the “problem” is absurd, and is itself part of the problem, his prescription is worth considering.

There are two obvious ways of thinking of this “problem,” and Kettl and I agree it really is a problem. The first way to think of it is “Progressive,” thinking of government as a benevolent force for good, working to bust trusts, improve wages and working conditions, and generally counterbalance the baleful forces of capitalism and modern society in favor of the largely helpless populace. What “we” need is far more government spending, larger budgets and much more regulation, so that government can show citizens that it can carry out the Progressive agenda of protecting us from all the risks in our lives, ranging from fattening food to polluted water, and from the concentrated power of corporations. It’s an ambitious agenda, and it’s underfunded; just add more funding, and people will realize that it isn’t that government is doing too much, it’s just spending too little. All we need is a good Democratic congress and president, and a new Golden Age will ensue.

The second way of thinking about this is that government really is straightforwardly trying to do too much, and Americans have this right. But along the way citizens have become confused about the very capacity of government, and the place of government in society. This second perspective is closer to Kettl’s view, though he has solidly Progressive credentials. His central claim is presented early on: “as government has invented new tools to meet citizens’ impossible expectations of more help without more government, it has not invented the skills needed to use these tools well. That has eroded trust in government’s ability to perform” (p. xi).

The title, “Jurassic Government,” has to do with the perception many people seem to have of government as a large, ungainly dinosaur, maladapted to its environment and probably headed for extinction. Kettl has what he thinks is a prescription for adaptation, allowing both the survival of a new improved government and a better society.

There was once, according to Kettl, a consensus, or at least close to consensus, on how to approach the problem of public administration. And I think he largely has this right. Paraphrasing—this is my version of the argument—the consensus went like this:

The advantage of #3, in my view, is that it limited what was possible to argue in #1. This meant that skeptics could both make principled arguments about the role of the state, and say “How are we going to pay for it?” No one seriously questioned #2, because it made sense to have those functions government should perform carried out with competence and efficiency.

This led to an unholy implicit agreement between Democrats and Republicans: the promises that could be made, and the programs created to fulfill those promises, were now essentially “unconstrained,” to use Thomas Sowell’s language from A Conflict of Visions: Ideological Origins of Political Struggles (New York: Basic Books, 1987). Republicans could no longer hold the line on government expansion, so they tried to hold the line on spending enough to carry out the functions Democrats had on their wish list. The battle line became “how big” government should be, not a deliberation over “how well” those functions could be carried out.

An unkind, but not entirely inaccurate, way of summarizing this would be to say that Republicans argued that government was incompetent, and then made spending and personnel decisions that ensured they were right. The aftermath of Hurricane Katrina, and the spectacle of “Brownie” being told by President Bush that he was doing “a helluva job” were a searing reminder of the fact that there are some government services that need either to be well-funded and well-organized, or else not promised at all. We have moved into a kind of inert middle, Kettl’s “Jurassic Government,” where the promises made to citizens are enormous. When citizens expect those promises to be carried out, however, the state collapses into incompetence and gridlock.

My own view is that politicians should promise much less, and that a realistic refocusing on debate #1, the realistic scope of government, is a necessary first step. But then I would agree with Kettl that the functions we agree on must be funded and staffed in a way that delivers on the promise. His program for reform focuses on four essential tools: Performance metrics, better technology management, managing (and spanning) boundaries, and human capital. I’m not sure his rather optimistic view (there are no references to any of the “public choice” problems of agency theory, bureaucracy, or politics) will cash out as well as he hopes, but I can’t disagree with his basic problem statement or with his proposed solution, at least in its outline.

As it stands, both Democrats and Republicans have an easy, self-confirming answer to criticism. When government fails to carry out our reasonable—in fact, impossible—demands, Democrats can say, “See, we need more funding!” and Republican can say, “See, government is incompetent.” The alternative, a much more coherent and narrowly defined state with an emphasis on competence and efficiency within that circumscribed set of duties, is hard to imagine at this point. But if we had it, some of those “leadership kids” might raise their hands to work for it.