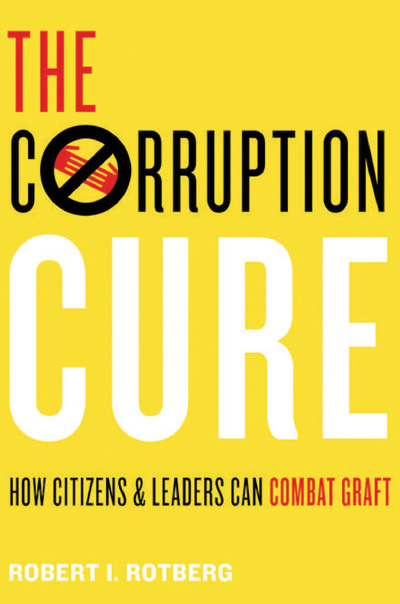 The Corruption Cure
How Citizens and Leaders Can Combat Graft
By Robert I. Rotberg
Kindle Hardcover Paperback
This book review is a web exclusive for the Winter 2017/18 issue of The Independent Review.

A book claiming to provide the “cure” for anything—let alone a problem as pervasive as corruption across the world—risks failing to deliver on its promise. Robert Rotberg’s The Corruption Cure is an ambitious book, comprised of a multitude of detailed case studies spanning the globe. It is also thoroughly researched and written by someone who is clearly passionate about its important subject matter. The major strength of the book comes from the author’s ability to find similarities across a wide range of cases, both success stories and cautionary tales. From these common threads, Rotberg pieces together a list of best practices in combating corruption. Anyone with an interest in understanding the dangers of rampant corruption and the reforms needed to battle it effectively would do well to read this book.

Rotberg begins the book by setting out to define corruption. He starts by noting that corruption takes many forms (bribery, nepotism, etc.), and explains that while corruption is common everywhere, it is especially damaging in developing nations. He draws a common distinction between petty or “lubricating” corruption—for example small payments made to secure permits—and grand or venal corruption which is much larger in scale. While petty corruption can be viewed as becoming expected or customary, grand corruption is especially damaging because it effectively erodes the public’s confidence in government. That said, Rotberg is quick to dismiss the notion that corruption, even of the petty variety, should be viewed as efficiency-enhancing. The dangers corruption pose to society, especially in the developing world, motivate Rotberg’s search for the “cure,” which he argues depends on a combination of an executive exercising political will, and an embrace of ethical universalism by the citizenry.

With a definition of corruption addressed, Rotberg turns to outlining the ingredients necessary to end corruption. Chief among them is a leader’s political will to do what is necessary to curb corruption. Other institutional factors are also important including strongly written laws, an independent judiciary, and a free media. However, laws themselves are not sufficient: political will to fairly enforce the laws without exception remains essential. Rotberg goes on to describe some of the strong legal frameworks used for combating corruption across the globe and, somewhat alarmingly, common elements include prosecutors with extensive powers placing the burden of proof on those accused of corruption, often based on solely the fact that a public employee appears to living beyond his means.

Rotberg next turns to a series of case studies documenting success stories. In many countries, national anticorruption commissions are established following some particularly egregious scandal and for the most part these commissions are ineffective, primarily designed to provide political cover and appease citizens. In Hong Kong and Singapore, however, the commissions and subsequent reforms were remarkably effective. In the case of Singapore, a former colony rife with corruption, change came following Lee Kuan Yew’s rise to power. Lee provided resources to allow the Corrupt Practices Investigation Bureau to function independently and effectively. Similarly, Rotberg considers Hong Kong’s Independent Commission against Corruption as exemplary and the basis for many other efforts around the world. Its effectiveness can also be traced to a key leader exercising political will and an emphasis on educating the public at large. These successes, especially the Hong Kong case, are viewed as extremely effective and sustainable, largely due to the tremendous support of the executive. As a counter example, Rotberg points to Indonesia’s anticorruption group which, after some early successes, was effectively gutted by subsequent leaders.

Next, Rotberg describes multiple cases from Africa where national anticorruption commissions did not receive executive support and were thus rendered ineffective. Botswana stands out as a notable exception. After a series of scandals, Botswana established an anticorruption commission modeled after Hong Kong’s institution. For Rotberg, the fact that corruption has not begun to run rampant or become accepted in Botswana is perhaps due to an accepted ethical universalism stemming from early efforts to change the political culture in the country. Other nations are not as fortunate: Rotberg presents the case of Nigeria, a country where corruption is accepted and rampant and executive power is used to actively thwart efforts to combat it.

Rotberg’s analysis includes the “most improved” countries based on changes in standard statistical measures. As is common in the successful cases Rotberg cites, Georgia’s fortunes turned under the leadership of a determined leader who was bent on combating corruption to legitimize his rule, attract foreign investment, and hopefully lead to Georgia’s admittance into the European Union and NATO. Rotberg contends that this show of political will helped to sway the political culture in the nation. President Paul Kagame of post-genocide Rwanda was similarly driven to rid his country of corruption. Kagame “made his authoritarian will known, made humiliating examples of corrupt politicians, and began mercilessly to limit personal freedom throughout the entire public service” (pp. 184-185).

As the numerous case studies make clear, for Rotberg, the crucial variable in combating corruption is political will of the executive. Leaders understand that corruption undermines the legitimacy of their rule. Rotberg notes that, “Successful leaders are consciously disruptive” (p. 225) and take decisive action to clearly demonstrate their will. For example, Singapore’s Lee was “obsessive, even ruthless, in cleansing a ruling cohort of anyone, even close and intimate political associates, who appeared to have succumbed to the temptations of corruption” (p. 233). A more contemporary example is China’s Xi Jinping, who is undertaking an aggressive approach to battling corruption. However, Rotberg cautions, “Nearly all of those arrested since Xi came to power have been allied to rival party factions; none of the military culprits have been his own appointees” (p. 246).

In another collection of case studies, Rotberg describes the histories of the consistently least-corrupt nations. Unlike the previous examples, these cases seem to be less about the heroic exercise of political will by some transformative leader, and more about the long-developing cultures of ethical universalism. In the case of Denmark, for instance, Rotberg describes how its monarchy developed a professionalized bureaucracy and allowed a political culture that eschewed corruption to evolve. In Sweden, lawmakers worked to transform the bureaucracy into a meritocracy, and a norm of ethical universalism took hold over time. Rotberg recounts similar stories about Finland, New Zealand, and the Netherlands: “corruption was reduced less by stronger laws...than it was by reshaping and reframing national political cultures” (p. 220).

Rotberg devotes the ninth chapter to more bottom-up approaches and the role technology plays in strengthening their role in the fight against corruption. New technologies have allowed for the publication of more official data and a transferring of more bureaucratic transactions online, effectively removing discretion (and the associated chance for solicitation of bribery). Social media and other low-cost forms of communication along with technologies such as dash cams have made the sharing of data on corruption far easier. Entrepreneurial public officials have developed more systematic ways of uncovering corrupt practices in the form of social auditing. Civil society also plays a role in the fight against corruption: Rotberg relates the story of Ana Hazare who engaged in a hunger strike in India to protest corruption, subsequently inspiring protests coordinated via social media and the eventual creation of a political party which achieved some electoral success.

Rotberg concludes his book discussing best practices and commonly effective reforms. Importantly, however, “political will is the single most critical variable in any effective campaign against corruption. Without [it]...there is almost no chance that corrupt behavior can be modified, much less reformed” (p. 297). Effective leaders can engage “their citizens, consciously or not, in a process of gradual socialization against corruption” (p. 298). The brief final chapter amounts to a fourteen-point list summarizing Rotberg’s “anticorruption program.” Unsurprisingly, the program begins with the call for a “transformative political leader embodying the new political will” (p. 310). This leader should clean house of corrupt bureaucrats, take steps to improve legal institutions guarding against corruption, improve oversight and transparency, and strengthen the independence of the judiciary and freedom of the press. Following these institutional reforms, education of the citizenry is important, as is ensuring that the public can make reports of corrupt practices, and that bureaucracy is simplified so that discretion on the part of officials is limited.

Throughout the book, Rotberg makes a compelling case that strong leadership and the exercise of political will constitute the critical component of any anticorruption effort. But this focus on political will also proves to be perhaps the most frustrating aspect of the book. Rotberg does an excellent job identifying political will as the thread common to all the successful endeavors he cites—but the problem then becomes finding such a transformative leader, a solution which the author cannot provide other than noting, “it falls to electorates and exercised publics to support only those contenders whose hands are clean and who reliably promise to reduce official corruption from the top” (p. 302). For a reader hoping for a clear-cut path forward, this may ring as unsatisfying.

Also alarming is how frequently the anticorruption practices Rotberg identifies as being the most effective seem to be characterized by draconian penalties, presumptions of guilt, and a general loss of liberty for public officials. Rotberg notes this on several occasions, remarking, “A respectable argument, therefore, might be advanced that corrupt practices in the developing world may only be curbed by leaders wielding mailed fists” (p. 251), before presenting Hong Kong and Botswana as counterexamples. Essentially, Rotberg notes that autocratic regimes bent on squashing corruption may be able to do so more quickly, but that such methods are not necessarily required. The jury is out on Xi’s aggressive approach in China, but the prospect of his prosecuting political rivals under the guise of cracking down on corruption is troubling.

But these are less criticisms of Rotberg’s book, and rather acknowledgements that the task of effectively combating corruption is a daunting one. The Corruption Cure makes its case for the need for transformative leadership compellingly, and in that respect should serve as a call for developing ideas of how to identify and cultivate such leadership where it is needed most.