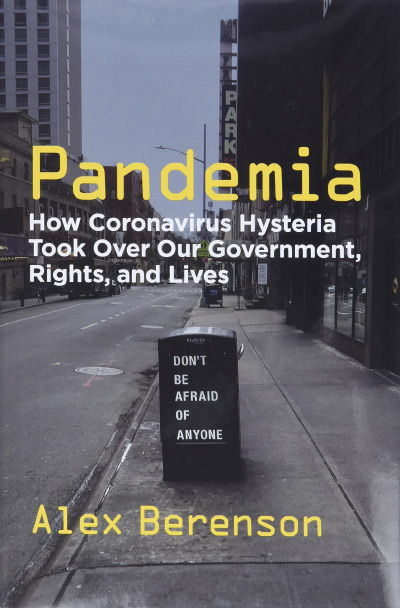 Pandemia
How Coronavirus Hysteria Took over Our Government, Rights, and Lives
By Alex Berenson
Kindle Hardcover Paperback Audiobook
This book review is a web exclusive for the Fall 2022 issue of The Independent Review.

Alex Berenson’s recent popular book tells the story of how the hysteria surrounding COVID-19 was demonstrably worse than the pandemic. Berenson’s explanation of this hysteria ranges from our fears of the virus and people who might be carriers to presumably dubious testing and reporting practices and from the consistent hyperbole of most media outlets to the self-serving interests of public health bureaucrats and politicians. Berenson recognizes we can use lockdowns to snuff out civilization, and he’s trying to spread the message.

While I sympathize with much of Berenson’s argument and value personal freedom and civil liberties, the book is largely an uncharitable attempt to dismantle the explicit and implicit justifications for public health responses to COVID-19 in the U.S. Intellectual charity requires at the very least a recitation of your opponent’s argument—a recitation that is equal to or better than what they are capable of articulating—and a mustering of evidence that specifically refutes those arguments. Berenson rarely attempts either. While Berenson cites myriad peer-reviewed articles on COVID-19 and, in some cases, levies evidence to counter specific arguments and interlocutors, his arguments cast doubt on opposing views, malign the intentions of interlocutors, or show them being hypocritical. These tactics and his overall presentation do not demonstrate the error of public health officials, let alone charity. Berenson likely has other goals in mind, e.g., to vindicate his fight against and highlight the hypocrisy of public health officials and their guidance, as well as the media’s role in spreading hysteria. His actual arguments on hysteria leaves much to be desired.

Berenson distracts readers with his personal experiences and battles on Twitter. Such experiences do indicate his seemingly genuine attempts to learn about COVID-19 research and report his findings and questions. Berenson admits, however, he was not always an exemplar of the truth-seeking arbiter; he was arrogant, insensitive, and perhaps, crude. Regardless of the who-said-what-to-whom game, Twitter “discourse” is clearly not the place for reasoned debate. Why would you expect anything different from hordes of strangers and mostly anonymous trolls? I might be tilting at windmills or yelling at people to get off my lawn, but Twitter “discourse” is often absurd and a barrier to productive conversations we might have. Berenson’s frequent references to what people on Twitter said, the number of likes a particular Tweet received, his direct messages replete with death threats, etc., are presented as prima facie evidence favoring Berenson’s arguments. Perhaps, such things are appropriate measures of a slam-dunk argument on Twitter, but they are of dubious quality in real-world conversations. Surely Twitter influences how people access information and how they perceive the world around them, but is this substantially different from any other media or source of information? Berenson makes no effort to connect such Twitter-related factors to hysteria; rather, he lets readers tell their own story.

Berenson’s lack of charity, his Twitter battles, and his savior-like tone does not mean he is wrong or that others won’t find the book interesting and entertaining. The research Berenson musters often paints a picture that clearly counters the public health consensus. We should be open to hearing such arguments. In his discussion on howdeadly COVID-19 is, for example, he points out that March 2020 CDC guidelines instructed that positive COVID-19 tests were not necessary to code deaths from COVID-19 (p. 139). This is clearly an important facet of how officials and laymen understand mortality statistics; if they are overestimated, we might be led to overreact.

Berenson also points to a variety of larger issues and interesting questions. Why, for example, was there so little public debate regarding public health policy, herd immunity, and vaccination plans? These are grand topics, and I recall some academic debates, e.g., The Soho Forum, special editions in (social science) journals, e.g., the Southern Economic Journal, The Independent Review, and initiatives in research groups like the National Bureau of Economic Research. With so much scholarly attention on the myriad aspects of COVID-19—in and out of the natural sciences—few public health officials were willing to subject their arguments to critical scrutiny. Such stances might have been appropriate during the crisis phase of COVID-19 (March and April of 2020), but the lack of scrutiny remains. Berenson also argues that the subjective nature of pain and our aversion to specific case definitions lead to the aggregation of ailments that boosts measurements and hysteria. On long-covid, Berenson states, “The constellation of symptoms for long Covid is both diffuse and heavy on psychiatric or quasi-psychiatric conditions” (264).

Because of the uncharitable approach, I expect Berenson will fail to persuade people who aren’t already persuaded to perceive the hysteria—real or not—and learn from it. As such, the book becomes primarily a history of Berenson’s perceptions and Tweets, a compendium of newspaper headlines, and quotes from public officials in their response to COVID-19. Such a history might be valuable, but it provides little for those trying to understand why such hysteria developed, why it persisted, how it erodes, and what we can do about it for future cases of disease-led hysteria. Those are important questions Berenson wants us to consider, but he doesn’t provide a way for us to consider them. The anti-Berenson, for example, could just as easily muster a similar kind of book to argue that lockdowns were clearly necessary in the spring of 2020, given available information, or that public health officials provided the approprirate information to save lives. Where are we left then?

To be clear, Berenson identifies factors that seem likely to have contributed to hysteria: elderly and sick patients were more likely to die from COVID-19 despite communications suggesting COVID-19 infected the general population; PCR tests were often misinterpreted to indicate positive cases; and public health officials often failed to convey the risks people actually faced. All these factors might have clearly increased people’s subjective estimate of the probability of acquiring COVID-19, and, thus, their reactions or overreactions. However, there is little analysis of those factors and how they influence hysteria, let alone any recognition of alternative explanations. People were genuinely afraid of COVID-19—regardless of public health propaganda. Would our individual and collective responses have been dramatically different with Berenson’s ideal public health bureau? Perhaps, but the alternative vision of public health is not clearly addressed. Berenson suggests people would have made better, i.e., calmer, decisions with a more objective understanding of COVID-19 risks. He is surely correct in that point, but how do we get there? Who disagrees with Berenson on that point? Berenson leaves these questions unanswered.

Moreover, Berenson attributes much of the hysteria to bad actors, often public health officials. Such arguments seem appropriate—considering the incentives people in the FDA and the CDC face to expand budgets and minimize personal risk—but they are not the sole cause of pandemia. One potential explanation would be that people should have done a bit more homework on infectious diseases on their way to becoming hysterical. Of course, learning such information is costly and people are often rationally ignorant so reliance on public health experts seems reasonable. However, hysteria follows from a willingness to be afraid, given rational ignorance, and the incentives public health officials faced to fan the hype. Hysteria does not emerge fully formed like Athena from the head of Zeus, let alone from the shadowy antechambers of crazed bureaucrats. People also consume a poor quality of journalism—on and off Twitter. While Berenson chastises some media outlets for their efforts to focus on the negatives, he stops short of indicting the entire profession. Given that media outlets and journalists face a profit motive that encourages them to publish shocking and click-worthy articles, why are some outlets spared? Don’t these incentives create a general bias in media that applies to the most ardent lock downers and anti-vaxxers alike? In any event, individuals value and constantly consume the kind of news that daily reports the sky is falling. People also elect representatives that cater to their desires and values for public health. There is a lot of blame to go around and many factors to hysteria, but Berenson is confident he has identified the culprits.

Byron B. Carson III
Hampden-Sydney College
COVID-19Government and PoliticsGovernment PowerHealth and Healthcare
Subscribe Buy This Issue Get the App