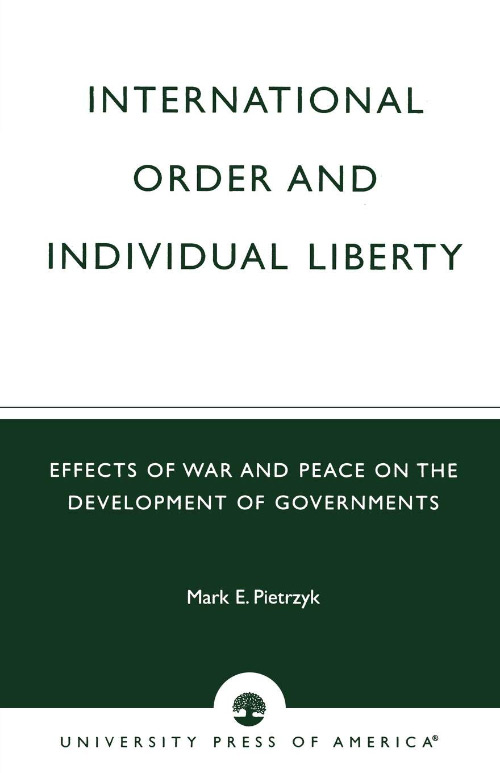 International Order and Individual Liberty
Effects of War and Peace on the Development of Governments
By Mark E. Pietrzyk
Paperback
This book review appeared in the Fall 2003 issue of The Independent Review.

In the past fifteen years or so, a cottage industry has burgeoned within political science focused on the observation that democracies have rarely, if ever, engaged in war with each other. Many scholars have concluded from this apparent fact that something about democracy causes peace. Perhaps the normal give-and-take of democracy is extrapolated to the international area, making democracies capable of settling their differences without resort to force, or perhaps ordinary people tend to dislike war (because ultimately they have to bear its burdens) and apply their clout in democracies to keep their governments from going to war, at least against other democracies.

Unlike most political science rumination, this research has had an impact on policy thinking. Bill Clinton’s administration prominently and enthusiastically embraced it, and many of the supporters of war against Iraq in George W. Bush’s administration argue that the forcible imposition of democracy there might very well lead to a cascade of democratic governments in the Middle East and thus, ultimately, to peace in that troubled region.

Mark E. Pietrzyk belongs to a comparatively small band of political scientists who take issue with the central proposition. Like others, he has been frustrated by the fact that when examples counter to the treasured thesis are brought up, democratic peace theorists gingerly massage definitions to conclude conveniently either that the case in point did not involve democracies on both sides or that what happened was not a war. For example, he points out that the problem presented by what appears to be a whole set of enthusiastic aggressions by France against quite liberal states in the last years of the eighteenth century is deftly solved by the controversial argument that France ceased to be a democracy in 1795 (pp. 126–27). Likewise, democratic Lebanon’s war against Israel in 1948 is brushed aside because Israel had not really gotten its formal democratic institutions in order yet (p. 205).

Pietrzyk’s engaging, thoughtful, and carefully argued (if somewhat repetitive) book is devoted for the most part to a fairly detailed and methodical examination of several cases. Again and again, Pietrzyk finds democratic publics eager for war even against other democracies, often abandoning their supposed propensity for peaceful give-and-take when sufficiently outraged at foreign slights. He would, I suspect, be inclined to be skeptical that a democratic Iraq will come to embrace Israel because of some sort of atmospheric affinity with Israel’s political system. Pietrzyk does not discuss civil war, but the inability of the United States in 1861 and of Switzerland in 1847 to work things out internally are only two of the instances in which peaceful democratic compromise clearly failed.

Moreover, suggests Pietrzyk, when periods of stable peace envelop democracies, the peace seems more likely to have been caused by factors other than the peculiar characteristics of the domestic political arrangements. Among these causes are the rise of antiwar norms, a centuries-old trend in Europe away from war, the gradual development of stable and defensible borders, the carving up of all the space in the world into a set of countries with agreed-upon borders, the watchful designs of an over-arching hegemonic country, and the looming, attention-arresting existence of nuclear weapons.

Pietrzyk goes further to argue that the democratic-peace theorists actually have the matter substantially backward. He makes a strong, if sometimes slippery, case that although democracy does not seem to cause peace, peace often causes, or at any rate facilitates, democracy by allowing democratic ideas and institutions space to flourish, national unity to be consolidated, economic development to take place, and a middle class and independent bourgeoisie to grow. War, on the other hand, tends to centralize authority, restrict civil liberties, and promote nationalist and militaristic ideologies.

It seems to me that this notion might be extended. Peace, or the reasonably consensual desire for peace, often can be more nearly a cause than a consequence of conditions that are taken to be its cause. Pietrzyk himself, however, seems to succumb to the notion that a major reason for the remarkable absence of warfare in western Europe since 1945 has been the institutions and patterns of economic interdepen-dence purportedly designed and developed in part to make war less likely there. However, the western Europeans emerged from the catastrophe of World War II rather fully convinced that they would just as well not do that again, thank you very much. It was this overwhelming desire for peace on the continent that caused, or facilitated, the binding institutions and trade patterns, not the other way around.