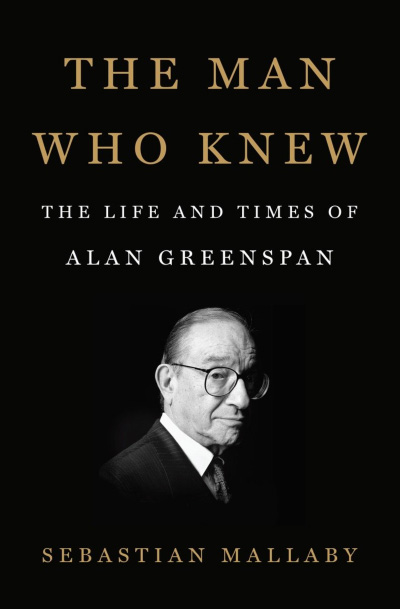 The Man Who Knew
The Life and Times of Alan Greenspan
By Sebastian Mallaby
Kindle Hardcover Paperback Audiobook
This book review appeared in the Winter 2017/18 issue of The Independent Review.

Aside from the Great Depression, Alan Greenspan’s tenure at the Federal Reserve may be the most studied period of U.S. central banking as measured by the number of academic and popular books written about the period. Sebastian Mallaby’s new book, The Man Who Knew: The Life and Times of Alan Greenspan, joins a number of Greenspan biographies that include Steven Beckner’s Back from the Brink (New York: Wiley, 1996), Justin Martin’s Greenspan (Cambridge, Mass.: Perseus, 2000), Bob Woodward’s Maestro (New York: Simon and Schuster, 2000), Jerome Tuccille’s Alan Shrugged (Hoboken, N.J.: Wiley, 2002), and Frederick Sheehan’s Panderer to Power (New York: McGraw Hill, 2010), as well as, of course, Greenspan’s autobiography, The Age of Turbulence (New York: Penguin, 2007).

The Man Who Knew stands out from these previous works by offering the most comprehensive and detailed biography of Greenspan to date. Mallaby delivers an exhaustive and intimate biography of Greenspan that traces the path from his youth through his consulting and political career and all the way through his tenure as chairman of the Fed. The book necessarily retreads many of the well-known Greenspan stories covered in past Greenspan biographies—for instance, the account of when Greenspan, after getting off a plane in Dallas on Black Monday (October 19, 1987), misinterpreted the market dropping “five oh eight” as 5.08 points rather than 508 points (p. 347).

The book, however, adds farmore detail tomany of these well-worn stories and offers many new entertaining accounts. For example, Mallaby relates how Greenspan, in an attempt to raise congressional support in 1995 for a federal bailout of Mexico, was pressured by Newt Gingrich to set up a telephone call with Rush Limbaugh (pp. 470–78). More commonly known, after failing to receive congressional support, Greenspan took matters into his own hands by running the bailout through the Exchange Stabilization Fund (pp. 470–78). The book, however, covers Greenspan’s personal life in such extensive detail that it may frustrate readers concerned primarily with the monetary or political aspects of Greenspan’s career. Mallaby’s talent for writing, however, makes the personal stories, including those involving Greenspan’s romantic flings with the likes of Barbara Walters, his complicated professional relationship with Ayn Rand, and his extremely close relationship with his mother, entertaining and intriguing.

One weakness in this approach, however, is that in providing such an impressive amount of detail, the book occasionally strays from reading exclusively as a biography of Greenspan. For instance, at several points in the book—such as Mallaby’s detailing of Nixon’s wage-and-price control meeting at Camp David (pp. 144–46), an event Greenspan wasn’t even present at—it reads like a biography of Richard Nixon. Near the end of the book, chapters 27 and 28 read more like a book on the financial crisis of 2008 than a biography of Greenspan. The relationship between Greenspan’s tenure at the Fed and the subsequent financial crisis, however, will likely play such an important role in determining Greenspan’s legacy that such level of detail may very well have been warranted. In my opinion, though, John Taylor’s Getting off Track (Stanford, Calif.: Hoover Institution Press, 2009) and Roger Koppl’s From Crisis to Confidence (London: Institute for Economic Affairs, 2014) offer more thorough treatments of the financial crisis for such an evaluation.

The academic reader should be aware, however, that Mallaby’s book is not an intellectual biography. To be fair, an intellectual biography isn’t the project Mallaby intended to deliver, but, given the existing personal biographies of Greenspan, it is what I hoped his book would provide because it is the treatment of Greenspan most noticeably missing in other biographies. Mallaby’s book, however, will certainly serve as a vital input into such a scholarly endeavor. More broadly, The Man Who Knew contains several running themes that will make the book a worthwhile read to any scholar interested in the intersection of political economy and central banking. I briefly expand on two of them here. A final note of caution to the academic reader, however, is that the book does not have a traditional reference section, just endnotes lacking page number guides, making it occasionally frustrating for academic purposes.

Perhaps the most important running theme is that The Man Who Knew offers, maybe unintentionally, one of the best modern ethnographies on how political power becomes intoxicating, even to individuals, such as Greenspan, who have already achieved substantial business success and financial wealth. This book leaves no doubt that Greenspan’s rise to becoming chairman of the Fed is inherently a political story. It was political connections, favors, and compromises that enabled Greenspan to secure his initial political appointments and to move toward achieving his eventual goal of becoming chairman of the Fed.

Each compromise that Greenspan made in his attempt to advance his political career led to additional compromises that had to be made (pp. 252–53, 287). For instance, Mallaby spells out how Greenspan, in his bid to secure an appointment as Treasury secretary, discarded or suppressed his libertarian beliefs in order to help Nixon win the presidency (pp. 124–27). Greenspan’s staunch opposition to government bailouts (pp. 140, 197) gave way to his support of several bailouts (pp. 200, 301–3, 375) and even to his consenting to the Fed’s badgering of private financial institutions to help prop up troubled governments and companies (pp. 354–55, 519–21, 538–39). Starting with Greenspan’s recruitment by the Nixon administration in 1971 to pressure Chairman Arthur Burns to refrain from engaging in further monetary tightening (pp. 139–44), Mallaby provides further evidence for the growing literature, finding that Greenspan and other Fed chairs were willing occasionally to compromise the independence of the Fed for political purposes (see, for instance, Peter J. Boettke and Daniel J. Smith, “An Episodic History of Federal Reserve Independence,” The Independent Review 20, no. 1 [Summer 2015]: 99–120).

Another important theme throughout the book is the struggle that Greenspan had with the knowledge problems inherent in central banking (see, for instance, Alexander W. Salter and Daniel J. Smith, “What You Don’t Know Can Hurt You: Knowledge Problems in Monetary Policy,” Contemporary Economic Policy 35, no. 3 [July 2017]: 505–17). Despite his private economic-forecasting experience and impressive command of economic minutiae, Greenspan, prior to being at the Fed as well as during his time at the Fed, repeatedly admitted knowledge problems in both the regulatory and monetary-policy functions of the Fed (pp. 206, 220, 287, 302, 513). He made important monetary-policy decisions during uncertain times based off of attempts to guess market participants’ behavioral responses (pp. 371, 378, 438–39, 444, 461) and off of central bankers’ gut instincts (pp. 332, 461) rather than off the model predictions and empirical evidence offered by Fed economists.

Although the book is a well-documented and thorough biography, one weakness is that Mallaby occasionally interjects his own personal beliefs. For instance, he begins the book by referring to French economist Frédéric Bastiat as “cultish” (p. 2). At several points, he also levies unnecessary and oftentimes uncharitable critiques of freemarket views. For example, he criticizes Greenspan’s views on antitrust law, writing, “But occasionally, when he strayed beyond the realm of numbers, he was less good at evaluating the evidence before his eyes: thus he had denounced all antitrust law, despite the concentrated nature of the economy in which he worked” (p. 116). Although certainly a contested literature, the free-market opposition to antitrust legislation is far more sophisticated than Mallaby asserts (see, for instance, Fred S. McChesney and William F. Shughart II, eds., The Causes and Consequences of Antitrust: The Public-Choice Perspective [Chicago: University of Chicago Press, 1995]).

Overall, though, Mallaby presents a thoroughly engaging and complete personal biography of Alan Greenspan. The book will definitely be of interest and scholarly use to academics working in the fields of monetary policy, monetary history, and political economy.