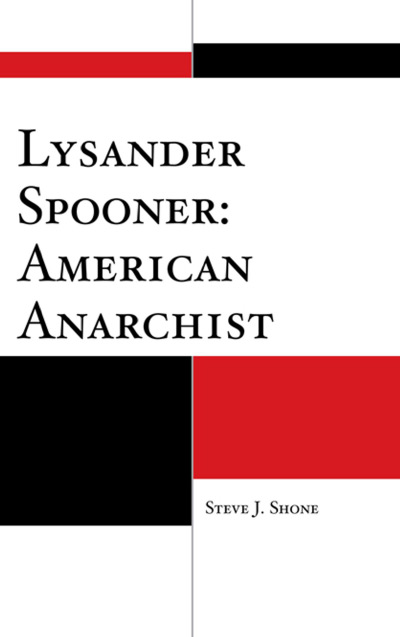 Individuals who want to learn about the relationship between libertarianism and the law will benefit immensely by simply reading the writings of Lysander Spooner (1808–87). In the introduction to Lysander Spooner: American Anarchist, political scientist Steve Shone eschews this approach, however, in favor of analyzing Spooner’s works using “the various categorizations prized by political philosophers” (p. xii). Unfortunately, at slightly more than one hundred pages, Shone’s book does not do analytical justice to Spooner’s lifetime of work. That work has much of importance to tell us; Shone’s does not.

The problems that beset the book begin with its title. The work that Spooner produced in the last two decades of his life is routinely labeled anarchical; indeed, in the 1870s and 1880s he was held in high regard by many Americans who aligned themselves with anarchist movements—such as Benjamin R. Tucker, who considered Spooner one of his mentors. It is rare, however, to find scholars arguing that his earlier essays and legal treatises (which he produced over the course of four decades, beginning in 1834) were underpinned by principles commonly understood as anarchical—libertarian, yes, but anarchical, no. In this respect, Shone sought to break new ground in his book, arguing that anarchical is a suitable appellation for the entirety of Spooner’s works. Unfortunately, nowhere does he provide us with his definition of anarchism. We are told that Spooner was an American Anarchist (Shone purposefully capitalizes both words), which means that he was a “bearer . . . of a distinctive ideology that calls into question the routine left–right scheme of classification” (p. xiii). But this statement is hopelessly vague. It might as easily be applied to libertarianism, and it is also an appropriate way to describe the voting patterns of ticket-splitting independents. Shone clearly does not want us to identify Spooner as someone whose views aligned with the stereotypical “bomb-throwing” anarchists. However, absent a detailed description of the American Anarchism of which Spooner was supposed to be a follower (and perhaps a leader), this conclusion is exactly the one that Shone’s book will encourage people to reach.

This aspect of the book is troubling because although interest in Spooner has increased in recent years, it has not always increased because people have had a serious desire to gain a deep and extensive understanding of the man and his work. Despite notable exceptions, people are often drawn to his work because he is a really good source for an ideologically diverse array of sound bites. Shone argues that “[t]oday, the limited number of people who recognize the name Lysander Spooner chiefly recall him as a nineteenth-century abolitionist” (p. vii). This claim is simply not true; it fails to appreciate that even within academia and certainly beyond it the people who “recognize” Spooner’s name have for a long time invariably associated it with the other topics about which he wrote. True, in recent years the scholars who have focused on Spooner’s abolitionist work have significantly enhanced his profile (including, for example, the first substantive references to his writings to appear in a U.S. Supreme Court opinion—namely, McDonald v. City of Chicago [561 U.S., 130 S.Ct. 3020 (2010)], which cites The Unconstitutionality of Slavery). However, to get to the top of the pedestal on which many members of the classical-liberal community (and now, it should be noted, Tea Party activists) place Spooner, one usually climbs steps lined with his writings about the monopoly of the U.S. Postal Service or his post–Civil War works (which are closer in content to what one might usually associate with anarchist thought), most notably No Treason. No. VI. The Constitution of No Authority (1870).

Even though some of these readings have gained cult followings for reasons that might concern Spooner (although he would be thrilled with the publicity), the reader can identify most easily the basic libertarian principles to which Spooner held firm throughout his life in these essays. It is therefore appropriate that Shone discusses many of them in the first two chapters of his book. However, when Spooner wrote about natural law, property rights (including intellectual property), the postal monopoly, and economics, he made it very easy for the reader to understand (if not to agree with) his position on the merits of limited government. Sad to say, Shone has not elucidated this position by using the strong, logical analysis that was Spooner’s trademark.

This criticism also applies to chapters 3 and 4, but to a lesser extent. Dealing with Spooner on political obligation and jury nullification, respectively, these chapters are clearly the most focused and analytically developed parts of the book. Yet a significant shortcoming remains: the presence of distracting pages of questionable relevance. It is interesting to learn about the similarities and differences between modern theories of jury nullification and the theory Spooner composed, but this lesson does not require an extensive discussion of twentieth-century court decisions on the subject. Shone doubtless found it necessary to include these references in the law review article from which chapter 4 is adapted, but more aggressive editing was needed to turn the article into a workable and engaging chapter for the book.

Chapter 5, which pertains to Spooner’s antislavery arguments, suffers from a different problem: inadequate contextualization that leads to misleading portrayals of Spooner’s positions. For example, in the 1840s Spooner penned The Unconstitutionality of Slavery. Shone contends that Spooner almost immediately afterward began to pen antislavery work that embodied a “less constitutionalist, and more radical, violent approach” to abolitionism (p. vii). In the 1850s, Spooner did indeed write some essays that might be used as evidence in support of this conclusion. However, in Shone’s book we are never told about the way in which the abolitionist movement in general adopted more radical and violent tactics during this decade, following the passage of the 1850 Fugitive Slave Act. We are similarly deprived of the important contextual knowledge that can be gleaned from the hundreds of letters that compose the collections of Spooner’s surviving correspondence. To be fair, Shone does provide a partial explanation for the absence of such material. He tells us that he purposefully wrote “a work of political theory—not a history book, and certainly not a biography” (p. xv). Unfortunately, this statement is accompanied by the following disclaimer: “[T]he limited number of sources available to any chronicler of Spooner’s life would make that [historical-biographical] task exceedingly difficult to execute” (p. xv). Perhaps this statement reflects Shone’s training—he is a political scientist rather than a historian. However, the fact that his book does contain some references to these letters, which clearly enhance rather than merely supplement his analysis, makes him seem guilty of poor scholarship regardless of the specific field in which he was trained.

Shone brings the book to a close in chapter 6 by identifying the core principles present in some of Spooner’s shorter (and frequently overlooked) works about religion (in particular deism), morality, and legal education. Although these writings share a relative brevity and exemplify the work to which one might point when labeling Spooner a pamphleteer, it is unfortunate that they are discussed together in Shone’s book. Thus, the same organizational flaw from which the previous five chapters suffer also mars this one. Spooner wrote about religion and legal education in the 1830s; Vices Are Not Crimes, in which he tackles morality, appeared more than four decades later. To be sure, these early works are marked by “the application of an unfettered logic, regardless of consequences, that favors no belief or person in a disinterested quest for the truth, something that the author believed was the right of every human being, as a corollary of natural law” (p. 98). And it is true that these characteristics formed the philosophical foundations of every work that Spooner penned thereafter, including Vices. However, at the end of this very short (ten-page) chapter and therefore of the book, one is left wondering what else—besides commitments to logic, natural justice, and individualism—unites Spooner’s writings about religion, morality, and legal education.

If Shone set out to argue that his subject “should be taken much more seriously as a political theorist” (p. xiv), then he probably succeeded. In this respect, people who are interested in libertarian principles should be grateful for the publication of Lysander Spooner: American Anarchist. By contrast, if Shone sought to convince his readers that Spooner is an “American Anarchist,” it must be said for substantive and methodological reasons that he failed. This failure, I suspect, occurred because he was trying to achieve the impossible: to make Spooner into something that he never was. Yes, toward the end of his life, as he became increasingly embittered by the post–Civil War evolution of American society and the federal government’s changing role, he put pen to paper in ways that appealed to many who called themselves anarchists. However, his later-life work product should not be understood to have given him membership in “a particular cohort whose output is best understood as a distinctive ideology in its own right” (p. x). Throughout his life, Spooner’s work was marked by libertarian commitments, which did indeed create a “distinctive ideology.” But it was an ideology for which there could ever be only a single spokesman. Spooner was the ultimate, individualistic army of one. And I suspect that he would not have had it any other way.