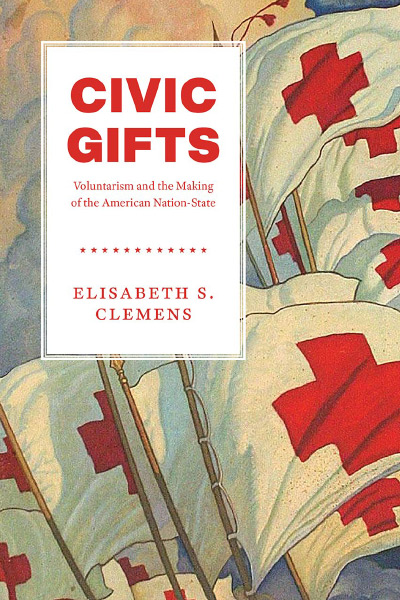 Civic Gifts
Voluntarism and the Making of the American Nation-State
By Elisabeth S. Clemens
Kindle Hardcover Paperback
This book review is a web exclusive for the Fall 2022 issue of The Independent Review.

In his classic treatment of the expansion of Big Government in the United States (2012, Crisis and Leviathan: Critical Episodes in the Growth of Government, 25th anniversary edition. Oakland, Calif.: The Independent Institute, pp. 18–19) Robert Higgs notes the challenge of bringing scholarly understanding to the complex dimensions of American political economy:

Big Government in the United States has various sources. Not all are equally important, but scholars have yet to develop analytical procedures for determining with precision their relative importance. Given the many intricate interdependencies among the various sources, such a determination may be beyond our grasp conceptually as well as empirically. Ameliorating negative externalities, providing nonexclusive public goods, guaranteeing the livelihood of the most unfortunate citizens, redistributing income and wealth, pursuing the elusive goals of influential ideologies, reacting to crises—such are the activities of modern Big Government. They are related differently to any particular stimulus or obstruction. Only by detailed historical study can one hope to understand the complexities of the growth of American government (emphasis added).

Thirty-five years later, we can look to new scholarship that has sought a deeper understanding of the evolution and expansion of the American nation-state, including the contribution Elisabeth Clemens makes with Civic Gifts. A historical sociologist, Clemens has written an important book that challenges the historically naïve premises of many contemporary arguments on behalf of limited government. Clemens situates her treatment of the role of voluntarism in the making of the American nation-state in a literature that is revisiting the theory and history of nation-states. This literature includes the work of Michael Mann, examining what he terms the “infrastructural power” of voluntary associations (1993, The Sources of Social Power, Vol. 2, The Rise of Classes and Nation-States, 1760–1914, New York: Cambridge University Press) and the interesting work of Brian Balogh (2009, A Government Out of Sight: The Mystery of National Authority in Nineteenth-Century America, New York: Cambridge University Press) exploring the patterns of cooperative arrangements between national, state, and local governments and voluntary associations that he calls “the associative state.”

Clemens’ addition to this revisionist interpretation of the role of national authority and the emergence of state capacity is to examine the ideologies, rhetorics, and institutions of gift-giving, voluntary association, solidarity, and reciprocity that shaped the changing patterns of American social relations from the Civil War to the present. A central puzzle she seeks to untangle is how America has experienced “the construction of a powerful national state in an anti-statist political culture” (p. 259). Intriguingly, Clemens, like Higgs before her (but without a reference to Higgs’ work), tells a story in which crises play an important role in shaping not just the growth of Big Government but in establishing a governing architecture she calls “the expansible nation-state” (pp. 103–38). From the Civil War to the depression of 1873, from World War I to the Great Depression, through a series of natural disasters and economic shocks culminating in the New Deal, Clemens observes:

Nations rarely build states under conditions of their own choosing. Natural disasters, epidemics, famine, and war threaten the well-being of even those citizens who most ardently defend individual liberty and warn against the concentration of power in the hands of government authorities. It is not the disaster itself that produces stronger states with greater capacity. These developments are driven by the rush of demands for effective government action and the improvisations of those who respond to the emergency (p. 103).

Civic Gifts explores the emergence of an empire of benevolence in the decades from the Civil War through the New Deal. The centerpiece of Clemens’ story is the politicization of benevolence that happened during the Great Depression, revealed through the contesting visions of Herbert Hoover and Franklin Delano Roosevelt about the role of government in ameliorating the widespread suffering caused by the deep and lingering economic downturn. Clemens recounts how the Depression strained existing networks of fundraising, donative capacity, and voluntary action. For President Hoover, Clemens writes, “voluntarism was both central to what it meant to be American and antithetical to government intervention” (p. 171). In responding to the economic distress, Hoover’s administration had tried to encourage and shore up the vast benevolent empire without using the U.S. Treasury for direct relief, but the fundraising capacity of municipal donative networks was soon over-strained. President Roosevelt and his advisor Harry Hopkins would try a new approach, turning to the use of “federal funding, state matching grants, and public administration relief” especially through the Federal Emergency Relief Administration created in 1933 (p. 177). By the end of the New Deal era, Clemens suggests, innovations, contests, institutional realignments, and the need to honestly confront the limited capacity of the federal government to administer benevolence across the continent had helped to lay down the institutional recombinations from which would arise the “relational geometries” of the American welfare state and the nonprofit sector familiar to us today.

Clemens argues that American benevolence, as well as America’s capacity to wage war, have largely been co-productions between public and private action. Until the comparatively late rise of an American system of direct welfare assistance, benevolence had been primarily supplied by voluntary actors. Nevertheless, Clemens challenges the equation of voluntary action with private action as well as the sharp delineation of public and private sectors. Benevolent institutions in America, Clemens shows, have existed not as an independent sector but rather as part of a dynamic landscape supported by legal frameworks allowing for the incorporation of and fundraising by voluntary associations; animated by moral frameworks recognizing the moral hazard of unreciprocated benevolence (potentially pauperizing recipients and diminishing their equality as democratic citizens); and entwined within flexible political frameworks allowing for the principal institutions and technologies of benevolence to evolve and flow among municipal, state, national, and voluntary sites.

Clemens struggles to find the apt metaphor to describe the topology of these complex arrangements, shifting between her theoretical framing of an “expansible state” to more metaphorical descriptions of “relational geometries” and even “choreography.” In sum, however, Clemens tells a story that resonates (but without a reference or citation) with Lester M. Salamon’s theory of third-party government. In his work to explain the resurgence of civil society infrastructure in recent decades (“The New Governance and the Tools of Public Action: An Introduction,” Fordham Urban Law Journal 28 [2000]: 1613), Salamon has described an “elaborate system of third-party government in which crucial elements of public authority are shared with a host of non-governmental or other-governmental actors, frequently in complex collaborative systems that sometimes defy comprehension, let alone effective management and control” (emphasis in original).

For decades, in seeking precedents for their resistance to the growth of Big Government, Americans have celebrated and invoked the Tocquevillean vision of American Democracy as a new model of self-governance being worked out through a historically new institutional domain of voluntary associations. Nevertheless, perceiving the nascent power of “democratic” associations, Tocqueville urged his readers to better understand the science of associational action in American society, for herein he foresaw a new political as well as social power that could as easily carry America into the conditions of soft despotism as to a new era of liberty and prosperity. Until recently, however, we have largely failed to respond to Tocqueville’s call for a “new science of association.”

With only a glancing, almost obligatory reference to Tocqueville, Civic Gifts contributes to extending the story of voluntary action past the 1830s. In the process she provides a history with which classical liberals should grapple, for it raises fundamental questions about the historical roots of their confidence in limited government, the historical context of laissez faire philosophy, and the prospects in the future for rolling back with any success the burgeoning Administrative State.

Clemens’ treatment of the architecture of American governance should also lead us to deeper reflections on our conceptions of historical change and the relationships between theory and history—between the social arrangements of our ideals and the social arrangements of our history. Clemens’ story leads us to see benevolence as a constitutive thread of state capacity that has now been transformed, by some accounts, into an arm of state capacity. For Salamon, this transformation becomes a normative theory of the relationships between civil society and states. Understanding historical facts, however, does not always lead us directly to theoretical conclusions. How would the story change if we were to view formal political institutions of government more as arms, extensions, or even utilities of a more vast and foundational cooperative social capacity struggling to survive beneath the pressures of democratic politics?

Such questions should take us another step deeper to understand how the argument from historical authority that is a core tradition in Anglo-American political discourse (see J.G.A. Pocock, 1957, The Ancient Constitution and the Feudal Law: A Study of English Historical Thought in the Seventeenth Century, Cambridge: Cambridge University Press) can distort our capacity to understand the past and to chart together a path to the future. Does empirical observation of historical fact create normative obligations as we move to the future? As actors in our own time, what do we owe to the conservation of tradition and what must we do to respond creatively to social challenges and economic crises?

With the rise of new institutionalism, public choice scholarship, and access to decades of additional empirical research in history and political economy, we have better analytical tools for extending Higgs’ effort to explore “the complexities of the growth of American government”—and to understand this growth in relationship to the growth of American society and economy. Moreover, we may finally attain a deeper understanding of the centrality of American benevolence in this story.

There is ample opportunity and need now for us to further probe, evaluate, and refine our understanding of the shifting patterns of cooperative activity in history as well as the history of innovation and institutional evolution in our systems of voluntary governance and benevolence. Such historical understanding does not create commands, but will surely amplify our sense of choice, our creativity, and our capacity for entrepreneurial responses in the face of the inevitable crises that require collective action.