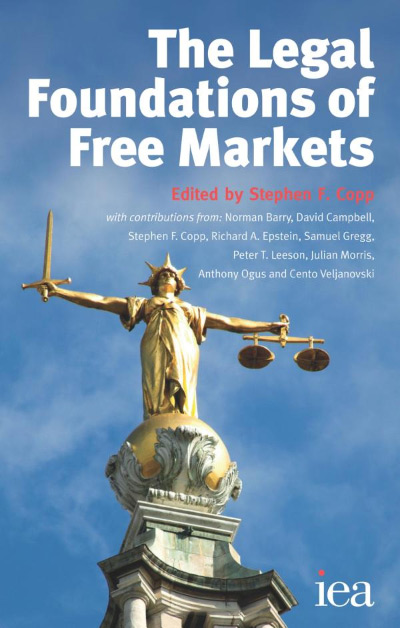 The Legal Foundations of Free Markets
Stephen F. Copp
Paperback
This book review appeared in the Spring 2010 issue of The Independent Review.

What does it take to have a “free” market? Do we need property and contract law? What about antitrust law? Are corporations, which limit their shareholders’ liability toward third parties, consistent with a free market? Are they necessary? The Legal Foundations of Free Markets, a fascinating collection of nine substantive chapters and an introduction that thoroughly canvases the issues, by some of the brightest legal thinkers who take markets seriously, raises such questions and provides careful, nuanced answers that are likely to stir debate.

The first five chapters tackle the subject from first principles, with George Mason University economist Peter Leeson asking, “Do markets need government?”; the Acton Institute’s Samuel Gregg exploring the natural-law basis for free markets; Institute of Economic Affairs fellow Cento Veljanovski examining the connection between the common law and wealth; University of Manchester professor Anthony Ogus tackling the problem of fitting regulation into a theory of markets; and University of Buckingham philosopher Norman Barry focusing on economic rights, especially the pernicious effect of treating these rights as less important than civil and political rights in modern legal systems. These chapters will surprise many people (at least, many people who don’t read The Independent Review). Starting with first principles upends the current, generally accepted view that at least a night-watchman state, perhaps even a regulatory state, is necessary to establish the “rules of the game” for market activity, that an unholy combination of Adam Smith and John D. Rockefeller invented free markets, and that hundred-page statutes are consistent with a productive economy.

Leeson, who has written definitive works on both anarchy and pirates and so has made economics seem much more interesting than most people imagine, carefully reasons through the necessary conditions for market activity, drawing on examples from contemporary anarchies, such as Somalia, and from history. He concludes that markets produce institutions that serve the key roles of enforcing contracts, that even stateless anarchies have significant amounts of economic activity, and that crime does not pose a special problem for markets under anarchy. Not every reader, not even every libertarian reader, will agree with Leeson’s conclusions, but working through the issues from first principles is a valuable exercise for everyone.

Samuel Gregg’s thorough survey of the natural-law basis for a market economy also proceeds from first principles. Gregg focuses primarily on St. Thomas Aquinas and the Spanish Scholastics, highlighting how they argued for key market concepts from a natural-law basis. Aquinas made crucial intellectual breakthroughs in monetary theory (money is not sterile), risk (risk bearing deserves compensation), the time value of money (it exists), and money (it’s not simply coins). The Spanish Scholastics made contributions by developing Aquinas’s thought and going beyond it to sophisticated understandings of property and price.

Anthony Ogus takes on the challenge of explaining theories of regulation. He clearly and concisely summarizes the major theories of regulatory law, including public interest and public choice, and surveys the types of rationales offered to justify intrusion into free markets. As in Veljanovski’s chapter, the material provided in Ogus’s chapter constitutes an excellent refresher course, but it is inadequate as a primer. Again, this shortcoming is not the author’s fault; the subject is simply too large to cover thoroughly in sixteen pages.

Finally, Norman Barry surveys the role of economic rights in law, making a convincing case that liberty can best be understood as consisting of both economic and political rights. His chapter is a fabulous example of the virtues of a first-principles approach (and of how a philosopher can write clearly in tackling a subject) because he cuts through a great deal of legal jargon to get to points that would take many law professors thirty or forty pages of throat-clearing even to attempt. I wish that Barry had played to his strength as a philosopher and offered a theory of why economic rights are treated differently than political rights. He unfortunately does not note that the infamous Michigan Supreme Court decision in City of Detroit v. Poletown was later overruled by the same court in the 2004 case County of Wayne v. Hathcock, a decision that recognized many of the arguments Barry makes in criticizing Poletown. His thoughts on the transition in the Michigan court’s rulings would have been a useful addition to the chapter.

The remainder of the book comprises four chapters that examine specific areas of the law: contract, corporate, antitrust, and environmental. These chapters are uniformly excellent. Durham law professor David Campbell digs into the law of remedies for breach of contract in an effort to explain the structure of the law and to find what the common law of remedies can teach us about the spontaneous order we observe in the marketplace. He concludes that the proper framework for analyzing contract law is Coasian, focusing on how the rules of contract laws create a transaction-cost minimizing framework for parties to reach their own agreements. He makes a compelling case that the law of contract reflects the parties’ agreement on a framework for resolving disputes, agreed to during the antecedent cooperative phase of their relationship. Thus, he concludes, “[t]he absurd mistake in the current criticisms of the law of remedies [is] to think that the law is unilaterally generous to the defendant. It is nothing of the sort. It is as generous (if this terminology maybe used) to the defendant as the claimant and defendant have agreed.” The result is a “sophisticated cooperative basis on which competition and choice over the terms of the contract stipulating the remedy take place, and a spontaneous order coordinating optimal levels of precaution” (p. 153).

Next, Bournemouth law professor and volume editor Stephen Copp provides a masterful analysis of the issues raised by the existence of limited-liability entities. He focuses on the negative incentive effects of unlimited liability: creditors will be induced to take excessive risk, leading to overprovision of capital to risky businesses. Moreover, unlimited liability leads to higher pricing of all capital as creditors come to recognize the need to price in the riskiness of their investments. Voluntary creditors, in contrast, are capable of protecting themselves via contract (for example, by insisting on a security interest) should the limited liability available be insufficient to persuade them to invest. Overall, Copp provides a compelling law-and-economics analysis of the virtues of limited liability. Two minor quibbles: the chapter would have benefited from more consideration of the problems of involuntary creditors (for example, tort victims) and mention of the development of limited liability in jurisdictions other than Great Britain.

University of Chicago law professor Richard Epstein contributes a comprehensive, first-principles dissection of antitrust law, built around a comparison of European Union and U.S. rules. As always, Epstein writes with clarity and verve, offering an engaging presentation of the details of European Union antitrust policy. He uses the comparative framework to good effect, digging into both jurisdictions’ practices to illuminate the philosophical underpinnings of antitrust law and the practical effects of the differences in approach.

The final chapter offers a comparison of public- and private-law means of dealing with environmental problems, written by the Institute of Policy Analysis’s Julian Morris (a friend, but no relation—his last name lacks a second s at the end). Morris is among the United Kingdom’s leading libertarian thinkers and has written extensively on this topic. In his chapter, he provides a thorough “common law environmentalism in one lesson” that covers all the major points. Because environmental problems are an area in which many free marketers lose their nerve and begin to waffle on the use of state power, Morris’s chapter provides a vital piece of the book’s overall project.

All in all, The Legal Foundations of Free Markets is an excellent addition to the literature on markets and the law. It offers well-written chapters by some of the best thinkers in the libertarian legal tradition about some of the most important issues in the law. Although comparatively short, these chapters provide careful, thought-provoking assessments of important literatures. By raising hard questions, approaching topics from first principles, and taking seriously the need to consider both philosophy and practical issues, the volume is in the best tradition of legal writing. By meeting all of these objectives in a mere 255 pages, the editor and authors have accomplished a significant feat. The book would make a fine foundation for a seminar on markets and the law. It ought to be required reading for any law student, prospective law student, or lawyer, as well as for economists, political scientists, and politicians.

Andrew P. Morriss
University of Illinois
Antitrust, Competition, and MonopolyEnergy and the EnvironmentEnvironmental Law and RegulationGovernment and PoliticsLaw and LibertyPolitical Theory
Subscribe Buy This Issue Get the App