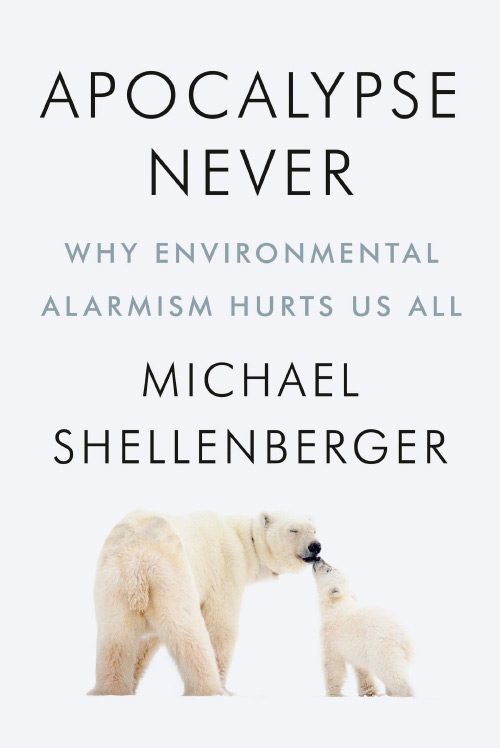 Apocalypse Never
Why Environmental Alarmism Hurts Us All
Michael Shellenberger
Kindle Hardcover Paperback Audiobook Audio CD
This book review is a web exclusive for the Winter 2020/21 issue of The Independent Review.

Should we be alarmed about the environment? Many (most?) self-described “environmentalists” seem to think so. A recent example is David Wallace-Wells’ The Uninhabitable Earth: Life after Warming (New York: Tim Duggan Books, 2019), which I reviewed in the last issue of The Independent Review. Wallace-Wells warns, “the world has, at most, about three decades to completely decarbonize before truly devastating climate horrors begin” (p. 214, emphasis added). Such writers either believe that the outlook for the environment is dire or that making things appear dire will move things in the right direction.

Michael Shellenberger—who was named a “Hero of the Environment” by Time magazine and is an invited expert reviewer for the next Assessment Report for the Intergovernmental Panel on Climate Change—has read a plethora of such predictions and once found them compelling. Now he does not. “Consider a June Associated Press article,” writes Shellenberger (p. 24), “It was headlined, ‘UN Predicts Disaster if Global Warming Not Checked.’ ... In the article, a ‘senior U.N. environmental official’ claimed that if global warming isn’t reversed [within ten years] then rising sea levels could wipe ‘entire nations .... off the face of the Earth.’ ... Governments ‘have a ten-year window of opportunity to solve the greenhouse effect before it goes beyond human control,’ said the U.N. official.” You may have read such ominous prophecies yourself. But, as Shellenberger points out, this story was published in June 1989, not last June. The ten years have come and gone thrice and the collapse hasn’t occurred. “Wolf!” has been called repeatedly, but the wolf isn’t here.

When will the environmental apocalypse finally arrive? Never, is Shellenberger’s answer.

The problem with apocalyptic environmentalism isn’t simply that it has egg on its face because of so many inaccurate predictions or that it’s simply wrong on the facts. As Shellenberger sees it, the true problem is that it pushes us to adopt policies that make things worse, to avoid better solutions and to warp our minds with nightmarish visions. (A national survey earlier this year found that one out of five British children aged eight to sixteen report literally having nightmares about climate change.)

Shellenberger ably dismantles many myths propagated in the name of protecting the environment. For example, the Amazon Rainforest has no serious claim to be the “lungs” of the earth. The idea is scientifically silly. The net contribution of the Amazon ecosystem to the world’s oxygen is effectively zero and the Amazon plants absorb only about 5 percent of annual carbon emissions. The “sixth extinction” is a myth. About 0.8 percent of plant and animal species have gone extinct since 1500—not anywhere near the scale of past extinction events, such as those caused by geological changes or asteroid impacts. And, previous extinction events have been followed by an efflorescence of new life forms, so that we’re currently at or near an historical peak of biodiversity on the globe. Likewise, he dismantles the idea that plastics are baneful, noting that flexible, durable plastics have replaced animal-based products, such as tortoise shells and ivory.

The chief victims of this alarmism are those living in poor countries, as environmentalists have pushed programs that can trap them in grinding poverty, working against projects like hydroelectric dams that can give them cheap, reliable power. Environmentalists are behind projects that have displaced millions of people in the poorest countries from areas where they’ve lived for generations to create nature reserves and then decry incursions into these areas by people seeking wood for fuel. The demand for this fuel will disappear once people in these areas achieve a higher standard of living and turn away from wood fuels to fossil fuels—as happened generations ago in rich countries, Shellengerger argues. He reports, for example, that subsidizing liquefied petroleum gas led to a reduction in deforestation in northern India. Once poor countries urbanize, nature will rebound as it already has in richer counties (see, for example, Jesse Ausubel, “Nature Rebounds,” Long Now Foundation Seminar, San Francisco (2015)). Part of this rebound is a net expansion of forest globally of about 750,000 square miles in the last 35 years.

If Shellenberger sees fossil fuels as a true gift to the people and environment of the poorest countries, he views nuclear power as a boon to the developed world. His case is hard to dismiss. Despite its undeserved reputation, nuclear power is incredibly safe. Annual global death totals are about 1.35 million from auto accidents and 4.2 million from air pollution, while nuclear energy deaths are “vanishingly small ... [N]uclear’s known total death toll is just over one hundred” (pp. 150-51, emphasis in the original). Germany’s nuclear phase-out has caused about 1100 excess deaths per year because of increases in air pollution due to the resultant increased use of coal-fired power plants. Policymakers have given massive subsidies to renewable energy, especially solar and wind power, but Shellenberger documents their Achilles heel—these intermittent power supplies require the availability of fossil-fuel plants as backups when the sun doesn’t shine and the winds don’t blow. Theoretically we could install a massive array of batteries to store solar and wind power and eliminate the need for fossil-fuel plants, but with current technology, this new infrastructure would cost about $23 trillion dollars, according to a 2018 study from the journal Energy and Environmental Sciences.

Why, then, do environmental alarmists swoon over renewables and loathe nuclear? Shellenberger documents some serious rent-seeking at work—environmental extremism pays well for many, including for nonprofits whose appeals tap into profound pessimism in the soul of modern man—the desire for an apocalypse because life doesn’t have enough meaning in the materialist world of so many environmentalists.

Is it correct to say that the environmental apocalypse will never arrive? Probably not. After all, astronomers predict that in a billion years or so the sun will get hot enough to boil the oceans—which sounds like a true apocalypse. But if “never” is “a billion years from now” there’s not much difference.