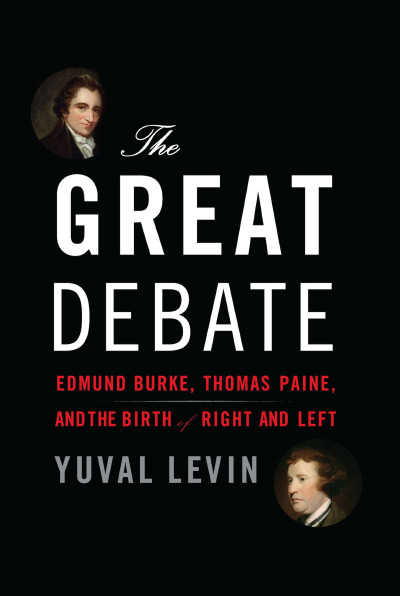 Edmund Burke and Thomas Paine were late-eighteenth-century political thinkers and prolific writers who disagreed fundamentally, both in private and in public, about the relationship between the individual and the state. Burke was an Irishman who spent the bulk of his career as a socially conservative and nominally religious member of Britain’s Parliament. Paine, by contrast, was a child of the Enlightenment, a freethinker who was born in England (which subsequently convicted him in absentia of treason), and a proselytizer for political revolution in America and France (both countries granted him citizenship—America also granted him ownership of a farm that had been confiscated from an English loyalist). Burke is perhaps best known as the father of modern political conservatism, arguing (mostly consistently) for the importance of tradition and for the gradual improvement of a nation’s social and political life. He also is remembered for having pronounced the death of European chivalry and for denouncing the succession of “sophisters, calculators, and economists.” Paine, by comparison, is remembered as a pamphleteer who spurred Americans to revolution with talk about “summer soldiers and sunshine patriots” and later as a champion of the French Revolution’s radical social and political ideals. Both men favored American independence, albeit for fundamentally different reasons owing to their differing political faiths. Otherwise, the two men’s philosophical differences could not have been greater.

In The Great Debate: Edmund Burke, Thomas Paine, and the Birth of Right and Left, the scholar Yuval Levin develops these differences in sharp and comprehensive contrast. Burke is the gradualist who believed in the necessity of maintaining and perpetuating more or less intact those social traditions that had emerged over the ages. Whereas John Locke had argued that removing God would dissolve all, Burke saw God and religion as merely one segment of a continuing thread that, if pulled, eventually would unravel society’s fabric. Burke, a tireless social reformer, believed that society should be continually mended rather than ripped apart and discarded. He believed individuals owed a duty of support to those social institutions, however imperfect, that showered them with benefits. Once this duty was satisfied, the individual became the residual claimant to the fruits of effort and sacrifice. Burke accordingly opposed the French Revolution’s radical social and political ideals, which nominally elevated the individual above the rest of society. He boldly predicted that the chaos in France would lead to war across Europe. He died in 1797, too soon to witness the accuracy of his prediction.

Paine, by contrast, stood firmly behind the French Revolution’s utopian ideals. By Paine’s lights (and, somewhat ironically, by Ronald Reagan’s lights two centuries later), government was seen to be the cause of rather than the remedy for society’s ills. The overarching problem, as Paine saw it, was that “government is governed by no principle whatever; that it can make evil good, or good evil, just as it pleases. In short, that government is arbitrary power” (qtd. on p. 112). Levin interprets Paine as arguing that “the principles of liberty will better protect individual freedom than the institutions of society” that Burke favored (p. 113). For Paine, “government is not a mystery at all. The science of government ought therefore to be a science of principles, not of single instances, and these principles are accessible to the reason of every rational individual” (qtd. on p. 151). Burke, too, recognized some intrinsic problems with government: for example, “[m]y opinion is against an over-doing of any sort of administration, and more specially against this most momentous of all meddling on the part of authority; the meddling with the subsistence of the people” (qtd. on p. 119). But whereas Burke preferred to prune away the rot, Paine argued for a complete uprooting by means of revolution and then for a replanting along rational lines that directly favored individual liberty.

Levin notes that the “dispute between universal principles [Paine] and historical precedents [Burke]—between a politics of explicit knowledge and a politics of implicit knowledge—cuts to the core of the debate that still defines our politics” (p. 174). His book comprises a dispassionate, insightful, and thoroughly worthwhile assessment of each man’s political thinking. It is difficult, in fact, to tell at the end which man’s political philosophy sailed closer to reality on balance because both men scored some obviously palpable hits. Even more remarkable is the confusion among modern political factions regarding their philosophical ancestors’ beliefs and methods. Levin notes in conclusion how

Burke’s thought remains essential to today’s American right[,] . . . [and yet, a` la Paine,] the American right [is] more inclined both to resort to theory and to appeal to individualism than Burke was. And the two tendencies are connected: The theory of American political thought most often and most readily at hand for today’s conservatives is an adaptation of the very same natural-rights theories that Paine, Jefferson, and other Enlightenmentliberal founders of America had championed, but which the left eventually abandoned. . . . Today’s left, therefore, shares a great portion of Paine’s basic disposition, but seeks to liberate the individual in a rather less quixotic and more technocratic way than Paine did, if also in a way that lacks his grounding in principle and natural right. Thus today’s liberals are left philosophically adrift and far too open to the cold logic of utilitarianism— they could learn from Paine’s insistence on limits to the use of power and the role of government. Today’s conservatives [by contrast] are . . . too rhetorically strident and far too open to the siren song of hyper individualism, and they generally lack a nonradical theory of the liberal society. They could benefit by adopting Burke’s focus on the social character of man, from Burke’s thoroughgoing gradualism, and from his innovative liberal alternative to Enlightenment radicalism. (p. 229)

At the bottom of these late-eighteenth-century political philosophies lie some crucial, although poorly articulated, principles of mankind’s economic nature. Paine, for example, was correct in condemning the rot that was endemic in public life, but he was fundamentally wrong to imagine that extirpation and rational replanting would forever cure the problem. The modern public-choice program in economics identifies fault lines that are intrinsic to public institutions and whose effects are minimized essentially in proportion to minimizing the scope of government. Historian Carroll Quigley described this situation succinctly in The Evolution of Civilizations: An Introduction to Historical Analysis, published in 1961 (2nd ed.; Indianapolis, Ind.: Liberty Fund, 1979), his early insights anticipating the gist of public-choice analysis:

An instrument is a social organization that is fulfilling effectively the purpose for which it arose. An institution is an instrument that has taken on activities and purposes of its own, separate from and different from the purposes for which it was intended. As a consequence, an institution achieves its original purposes with decreasing effectiveness. Every instrument consists of people organized in relationships to one another. As the instrument becomes an institution, these relationships become ends in themselves to the detriment of the ends of the whole organization. . . . The purpose of the organization . . . becomes no more than a secondary aim for everyone in the organization. . . . [E]veryone in such an organization is only human and has human weaknesses and ambitions, or at least has the human proclivity to see things from an egocentric point of view. Thus, in every organization, persons begin to seek their own advancements or to act for their own advantages: seeking promotions, decorations, increases in pay, better or easier assignments; these begin to absorb more and more of the time and energies of the members of an organization. All of this reduces the time and energy devoted to the real goal of the organization and injures the general effectiveness with which an organization achieves its purposes. Finally . . . the social conditions surrounding any such organization change in the course of time. When this happens the organization must be changed to adapt itself to the changed conditions or it will function with decreased effectiveness. But the members of any organization generally resist such change; they have become “vested interests.” Having spent long periods learning to do things in a certain way or with certain equipment, they find it difficult to persuade themselves that different ways of doing things with different equipment have become necessary; and even if they do succeed in persuading themselves, they have considerable difficulty in training themselves to do things in a different way or to use different equipment. (pp. 101–3)

Burke apparently sensed these realities, which he sought to manage by means of perpetual reform. Paine missed them completely, and the French Revolution’s utopian ideals were unfulfilled in part because of them.

Paine also failed to recognize that his cafeteria-style ideal of individual choice would give rise to monumental collective-choice problems. Burke correctly noted that individuals have social duties that must not be shirked—namely, the duty to support the provision of public goods (an economic phenomenon that was not yet identified and named): “Dark and inscrutable are the ways by which we come into the world. The instincts which gave rise to this mysterious process of nature are not of our making. But out of physical causes, unknown to us, perhaps unknowable, arise moral duties, which, as we are able perfectly to comprehend, we are bound indispensably to perform. . . . Men come in that manner into a community with the social state of their parents, endowed with all the benefits, loaded with all the duties of their situation” (qtd. on p. 102). Paine, by contrast, as Levin notes, “begins from the principles of liberty, equality, and natural rights and builds political institutions on those grounds to defend the prerogatives of the individual” (p. 124). Even in the absence of technical knowledge about public goods and the problems of collective action, it is easy to understand why Adam Smith found that “Mr. Burke is the only man I ever knew who thinks on economic subjects exactly as I do, without any previous communication having passed between us” (qtd. on p. 120).

The “unknown,” “dark,” and “inscrutable” moral duties to which Burke referred are partly a result of the instincts and capacity for reason instilled by Darwinian natural selection, a concept that was not identified until nearly a century later. As Burke recognized, however, these duties also are a consequence of continuous human interactions—prescriptive traditions, if you will—carried out and refined over eons. Friedrich Engels aptly described the process by whichthese inscrutable duties arise: “[W]hat each individual wills is obstructed by everyone else, and what emerges is something that no one willed” (qtd. in Thomas Sowell, Intellectuals and Society [New York: Basic Books, 2009], p. 51). Engels’s description jibes with the modern technical description of “emergence,” which, according to the neuroscientist Michael Gazzaniga, occurs “when micro-level complex systems that are far from equilibrium (thus allowing for the amplification of random events) self-organize (creative, self-generated, adaptability-seeking behavior) into new structures, with new propensities that previously did not exist, to form a new level of organization on the macro level” (Who’s in Charge: Free Will and the Science of the Brain [New York: HarperCollins, 2011], p. 124). Burke also was right about prescriptive duties not being necessarily predictable or reducible to first principles. Here, too, Paine was oblivious.

The victory, on balance, was Burke’s.

James A. Montanye
Falls Church, Virginia
Culture and SocietyDemocracyGovernment and PoliticsPhilosophy and ReligionPolitical HistoryPolitical Theory
Subscribe Buy This Issue Get the App