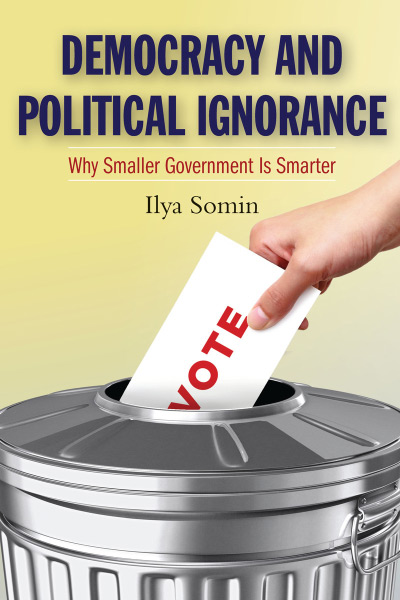 Democracy and Political Ignorance
Why Smaller Government Is Smarter
Ilya Somin
Hardcover Paperback
This book review appeared in the Fall 2014 issue of The Independent Review.

In Ilya Somin’s excellent new book Democracy and Political Ignorance, the public is ignorant; their ignorance is a problem for American democracy, and it “poses a very serious challenge to democratic theory” (p. 6). In the same general vein as Bryan Caplan’s wonderful book The Myth of the Rational Voter (Princeton, N.J.: Princeton University Press, 2007), Somin blames the problem of ignorance on the lack of weight any one person’s vote carries on electoral outcomes. When a person’s vote has little bearing on an electoral outcome, most citizens devote little time to acquiring political knowledge, and we get ugly electoral outcomes. For Somin, the old computer science saying “garbage in, garbage out” seems to apply to politics, and a great deal of garbage is being inputted into the system thanks to a general lack of incentives.

Ignorance is a problem our founders worried about, and mechanisms were put in place in 1787 with the hope of protecting Americans from themselves. But, for Somin, the problems of ignorance are even worse than our founders could have imagined: people take shortcuts when voting; they are biased; and they rely on inaccurate information when making decisions over politicians. The birthers who insist President Obama prove he is a natural-born U.S. citizen, for example, have gained a great deal of traction because people do not process political information with any real objectivity. Politics is like sports for Somin, and, like sports fans, the public plays up their team’s strengths and “downplay[s] anything that cuts the other way” (p. 79).

The strength of Somin’s book is in the quality of the writing and the up-to-date evidence he provides the reader with on the scope and scale of voter ignorance. It is one of the more recent books illustrating how little Americans know about politics and why it matters, and such contributions are vital.

Somin does not get bogged down in theoretical issues related to political ignorance versus rational irrationality, which is good for his intended audience. But this absence of theoretical grounding does make his use of the word ignorance a bit elastic and a departure from Anthony Downs’s description of rational ignorance in his 1957 book An Economic Theory of Democracy (New York: Harper & Row). For Downs (and for about fifty years of public-choice economics), rational ignorance among voters has led to an implicit cancelling out of bias: for every million ignorant people in favor of trade protections, for example, another million or so favor free trade.

The ignorant mob, moreover, because of the logic of concentrated benefits and dispersed costs, as outlined in Mancur Olson’s The Logic of Collective Action (Cambridge, Mass.: Harvard University Press, 1965), has little incentive to organize. This ignorance and the power of entrenched interests—industries wanting protections in the case of trade—have secured the results wanted by the entrenched interests. Ignorance was rational in the Downsian story, but the bias described in Somin’s (and Caplan’s) work has played no major role in the resultant policy outcomes.

Although using the term ignorance throughout, Somin is explicitly influenced by Bryan Caplan and seems to be talking more about irrationality. Calling irrationality “ignorance” is fine and good for the sake of reaching a larger audience, but there are important theoretical lines separating the two, thanks to Caplan’s work. Throughout his book, Somin seems to be dancing between the two concepts.

After discussing ignorance and irrationality, and after walking readers through a great deal of evidence on the depth of our political ignorance, Somin turns his attention to possible solutions to the problem of ignorance (chapters 5 through 7). Here Somin is at his best—breaking new ground. In his final chapter (chapter 7), which would have worked better if placed ahead of his two big “solutions” chapters, he says there is little hope for increasing political knowledge through education and greater deliberation or through changes in media coverage. Restricting the franchise and delegating politics to experts, meanwhile, are unpopular solutions and have their own problems. Thus, maybe the best solution to the ignorance problem is for us to reduce the number of decisions controlled through democracy and return as much as possible to more local levels of authority.

In chapter 5, Somin discusses the role that “voting with one’s feet” can play in constraining government and protecting us from ignorance. He argues for more decentralization because jurisdictional competition assures accountability and decisive outcomes: each person who moves has, in effect, cast a decisive “vote” about the desirability of one set of policies and politicians over another. Somin encourages us to imagine greater decentralization, and he also takes us back to earlier periods in American history when more decisions were handled locally and people could move from one place to another if they were unhappy.

In chapter 6, Somin (a law professor at George Mason University) argues for judicial review over more democratic decisions. Judicial review, although defensible because it leads to far superior economic outcomes in countries with more of it, has fallen out of vogue in America. In part, the shift away from judicial review is because it is perceived as antidemocratic and elitist to let judges override the wisdom of the democratic crowd. But Somin, of course, takes issue with the idea that democratic outcomes are good and wise. Democratic decisions are, in fact, often arbitrary, sometimes stupid, and most definitely grounded in ignorance.

Somin’s analysis is on the mark throughout, and it quite rightly opens up with a quote from James Madison about popular government being a “farce” if lacking in information. Like Madison’s project, Somin is interested in the incentives generating widespread ignorance on the one hand and ways to constrain ignorance on the other.

But therein lies one of the biggest challenges for Somin and others concerned about ignorance and America’s democratic failure: the genie is out of the bottle, and there is no obvious way to turn back. Judicial review, for example, has been pushed aside in favor of majoritarianism—as well as in favor of referendum voting on the one hand and activist judges on the other. The Tiebout competition highlighted in Somin’s menu of solutions has been kicked aside in favor of greater and greater concentration of power at the federal level. And, as Somin makes clear, there is absolutely no hope left if we leave things to the American voter.

We are left, then, with a failed American democratic system, one that will wobble along for decades, if not centuries to come. Somin’s work is a fine testament of where we have gone as a country and how the strong incentives we face to be politically ignorant have driven our decline. His work also offers plausible solutions to our modern-day problems, but I am skeptical about greater decentralization or a swing back toward more judicial review happening any time soon.

Somin’s analysis sheds a great deal of light on America’s democratic failure, but the issues of transitioning from “here” (i.e., an American tending toward an idiocracy) to “there” (an America where some checks and balances are restored) are not made clear to the reader. Transition issues are messy, so it makes sense that Somin tends to sidestep issues involving the implementation of reform.

Along with the issues of transitioning, Somin’s work also downplays the role of the political entrepreneur in putting our country on a different trajectory. The simple version of Democracy and Political Ignorance, as I read it and stated earlier, is “garbage in, garbage out.” Ignorant voters have bad information and rely on flawed heuristics in the political domain. When garbage is going in, it is no surprise, therefore, to see bad political outcomes being spit out.

Though the Somin story is a persuasive one, other factors matter at the margin. Leaders, for example, matter, and every now and then countries have moments whena politician or set of policies come along and result in a significant departure from current political opinion. The “shock therapy” experiences in eastern Europe, for example, were one such moment when, despite the broad-based social welfare preferences of voters in the region, economic liberalization for the better occurred. Franklin D. Roosevelt, in contrast, is an example of an entrepreneurial politician who overstepped the median voter’s attitudes during the 1930s, and we all are the worse as a result. Programs such as airline deregulation of the 1970s, financial market liberalization in the 1980s, and progress on free trade in the 1990s stand as examples of political entrepreneurs outmaneuvering the mob. Such examples suggest there exists some slack in the system, which Somin acknowledges but downplays. Slack in the system that allows for entrepreneurs to step in may very well be our only hope given the ugly realities of America—realities Somin so carefully and so clearly opens our eyes to one page at a time.

Scott A. Beaulier
Troy University
Elections and Election LawGovernment and PoliticsGovernment PowerLaw and LibertyPolitical Theory
Subscribe Buy This Issue Get the App