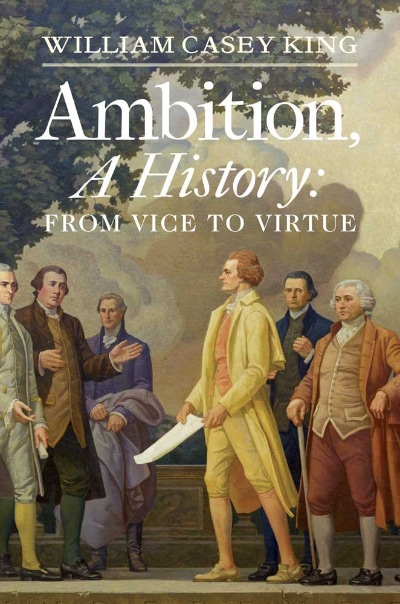 Ambition, a History
From Vice to Virtue
William Casey King
Kindle Hardcover
This book review appeared in the Fall 2014 issue of The Independent Review.

Ambition is a human trait with a profoundly Dickensian character. It is the best of virtues and the worst of virtues. It is both denounced and praised by religious and secular authorities. It drives entrepreneurship, innovation, and economic growth but also causes the creative destruction of established economic and social orders. It fosters the rise of civilizations and propels their decline. And yet, as author William Casey King notes, historians have ignored the inflected path of ambition’s transformation from ancient vice to modern virtue, an oversight that coincidently enables many distorted interpretations of economic and political history.

King’s splendid book Ambition, a History: From Vice to Virtue illuminates the management, manipulation, and literary exposition of ambition from antiquity through America’s founding. The work explains, among other things, why Shakespeare’s Marc Antony publicly dismissed rumors that Caesar was ambitious and how the Bard’s tale of the Macbeths’ vaulting ambition echoed the Geneva Bible’s familiar exegesis of original sin; why the medieval church located ambition within the deadly sins of avarice and pride and why the prescribed remedy for ambition was “mediocritie”; why, in King’s words, “[a]mbition was inveighed against in official Elizabethan homilies read by order of the state in pulpits throughout England; defined as ‘the unlawful and restless desire in men to be of higher estate than God hath geven or appoynted unto them’; identified as one of the major causes of rebellion; and associated with Satan, madness, damnation, and sin” (p. 46); why the age of exploration caused both church and state suddenly to embrace ambition; how Francis Bacon’s insight linking ambition with disease influenced James Madison’s vision of a constitutional structure that would cause “ambition . . . to counteract ambition”; why John Adams could write in 1777 that “[a]mbition in a Republic, is a great Virtue, for it is nothing more than a Desire, to Serve the Public, to promote the Happiness of the People, to increase the Wealth, the Grandeur, and Prosperity of the Community. This, [sic] Ambition is but another Name for public Virtue, and public Spirit” (qtd. on p. 187); and, finally, how ambition’s excesses and limitations continue turning potential bliss into woe for millions of individuals, including many who live under nominally republican forms of government.

King identifies the turning point in ambition’s transformation from vice into virtue as being the New World’s opening to colonization. Bacon, who privately counseled Elizabeth I and James I, argued publicly in Advancement of Learning (1605) and Of Ambition (1612) not only that private ambition could be contained, but also that affording appropriate outlets for it would benefit the state. Exploration, colonization, and resource extraction became enormously beneficial outlets, as the English and Spanish Crowns discovered. Official attitudes toward ambition shifted rapidly as a result. In 1605, on the eve of England’s formal effort to colonize America, the playwright Ben Jonson was imprisoned and told that his nose and ears were to be forfeit as punishment for producing a play titled Eastward Hoe, which wryly condemned, along traditional lines, the pursuit of private ambition in “Virginea,” a pursuit that happened, unfortunately for Jonson, to be consistent with England’s tacitly emerging economic policy. King regrettably does not compare and contrast this sea change with Max Weber’s celebrated view of the Protestant ethic’s roughly coeval effect on the spirit of capitalism.

Wresting ambition from the panoply of vice and reconstituting it as a virtue was [sic] a necessary ideological precondition to the establishment of the United States. Without ambition, there could be no America. Understanding ambition within a historical and ideological context illuminates a facet of our Declaration of Independence, our Revolution, and a fundamental aspect of our national character. The War for Independence was not just a political struggle, it was a contest over the very definition of good and evil. Formally a manifestation of original sin, ambition was transformed into “another name for Public Virtue.” (p. 190)

It is important to note, however, that ambition was not an unalloyed virtue. Ambition fostered subjective ends that were privately and publicly desirable only on balance, and so the costs of ambitious pursuits must be balanced against the benefits. King duly notes that “[a]s the nineteenth century was to show, women, African Americans, and Native Americans were never imagined to be part of the celebration of ambition. Self-made men were just that” (pp. 187–88). Unfortunately, the cost of their making was often borne to a considerable extent by other individuals. Ambition, as Bacon noted, must be bridled.

James A. Montanye
Falls Church, Virginia
Culture and SocietyGovernment and PoliticsPhilosophy and ReligionPolitical Theory
Subscribe Buy This Issue Get the App