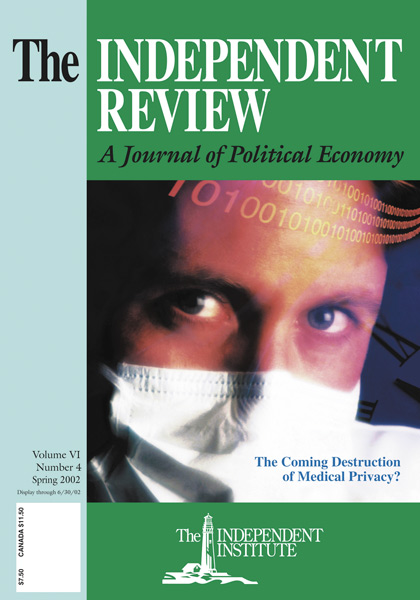 Paul MacAvoy’s Natural Gas Market is a thin volume of just 135 pages. Despite its brevity, it is the book of record for more than a half century of regulation of the natural-gas industry. The economics discipline is fortunate that so talented an analyst as MacAvoy has devoted his attention for so many years to the study of the natural-gas industry and its regulation.

Any analysis of a regulated industry involves study of both economics and law. My own efforts at Amoco to understand regulations were helped greatly by the lawyers who over the years followed the changes in the law, studied the court decisions, and wrote the contracts under the regulations. My experience pales, however, in comparison to MacAvoy’s. He had as his long-time collaborator Stephen Breyer, now a justice of the U.S. Supreme Court.

MacAvoy was able to study the regulation of natural gas as it metamorphosed several times over the years. The first stage began in 1938, just as the interstate pipeline system was being established. The ostensible purpose of that regulation was the achievement of stable prices. Specifically, the purpose stated in the Natural Gas Act (NGA) of 1938 was the Federal Power Commission’s (FPC) establishment of “rates that are just and reasonable to protect the interests of utility customers, while at the same time safeguarding the rights of investors to the end that new capital will be attracted” [for an] orderly expansion necessary to meet consumer needs. “Although that wording seems reminiscent of the standard economic model of voluntary exchange, in which all parties benefit, under regulation the potential exists for some “investors” to draw economic rents away from other “investors.” The 1938 law was the primary guidance until 1954, when a new regulatory regime was enacted.

In 1938, there was no network of pipelines to distribute the natural gas. Thus, the objective of promoting the construction of transmission infrastructure resembles the creation of a “real option.” Robert Pindyck, an early collaborator of Paul MacAvoy, might have gotten the inspiration for his later work on “real options” from the study of natural-gas transmission (see Avinash K. Dixit and Robert S. Pindyck, Investment Under Uncertainty [Princeton, N.J.: Princeton University Press, 1994]).

Although MacAvoy recognizes the public perception of the FPC as an agency seeking to “stabilize” the prices of natural gas delivered to utility customers, he also observes (in more polite language) that price stability is the last refuge of regulatory scoundrels.

In 1954, the Supreme Court in Phillips Petroleum Company v. Wisconsin upheld the FPC’s limitation of the prices of natural gas at the wellhead. This decision had a substantial effect on the development of the industry and, not incidentally, on the distribution of economic rents. Phillips Petroleum began the second stage of natural-gas regulation, when the focus was placed on “security of delivery at the wellhead.”

In the beginning of this second period, every contract with an individual producer was subjected to a “cost-based” limit on prices. The FPC was soon overwhelmed with too many contracts that had too many cost elements.

In 1960, the FPC set “area” rates for twenty-four producing regions, separating old contracts from new ones. This price fixing also proved a difficult task, taking eight years before the Supreme Court approved the limits in just one producing region, the Permian Basin. Between 1968 and 1977, economists began to suspect that the dead hand of regulation was reducing the supply of natural gas. That concern became more intense with the Arab oil boycott of 1973–74, when controls placed on oil prices aggravated the supply shortage of natural gas.

To determine how much excess demand existed, MacAvoy constructs a supply model to estimate the prices and the quantities of natural gas that would have prevailed in the absence of the wellhead controls. He shows convincingly (using a model as good as, if not better than, any I have seen in my career as an oil company economist) that the wellhead controls restricted reserve additions and eventually led to higher prices because of that increased scarcity. From 1968 to 1977, there was a substantial loss of both producer and consumer surplus.

It was perceived at the time that the nation was running out of natural gas. To cope with the shortfall, the Carter administration proposed an additional set of regulations intended to ration the dwindling supplies. After a year of deliberations, Congress passed the Natural Gas Policy Act (NGPA) of 1978, which ushered in a third period of controls. The NGPA established a system based on consumption priorities in which residential consumers ranked highest and industrial consumers lowest. In addition, the Fuel Use Act of 1979 diverted natural gas from electric power plants in order to reduce excess demand even further.

The NGPA also initiated a six-year phased decontrol. Soon after the law had been put into operation, however, the Iranian Revolution occurred, causing another oil shock, albeit a milder one than that of 1974. The winter of 1979–80, one of the coldest and snowiest on record, compounded the natural-gas problem, putting upward pressure on all energy prices and interrupting the transportation of oil and refined products, especially in the Midwest. However, no delivery curtailments occurred during this period, in part because of the constraints on industrial and power plant consumption. Reserves did not increase. Indeed, they remained unchanged from 1980 to 1984—the year prior to the final year of the phased decontrol, 1985—putting steady upward pressure on prices corrected for inflation. That increase, in turn, led many to predict a “fly up” of natural-gas prices after decontrol.

The NGPA allowed several noncash components to be added to the price of natural gas. In accordance with most-favored-nation provisions, the prices of some controlled gas were allowed to increase to equal the price of newly contracted gas. Oil parity adjustments were also permitted, as were take-or-pay stipulations.

MacAvoy measures the transfers of consumer and producer surplus for the 1980s. Using the price-quantity model, he finds that whereas producers gained substantially, mainly at the expense of consumers, those gains were to be canceled by the subsequent surplus or gas “bubble,” as it was called at the time.

MacAvoy does not mention, however, two other developments at the end of the first half of the 1980s. One was the reneging on take-or-pay contracts by some pipelines and distribution companies. Claims of potential losses by those who reneged were on the order of several billion dollars. Those claims were exaggerated because the gas volumes at issue were not lost; their deliveries were just postponed until the end of the contract periods. Thus, the only loss each party faced was forgone interest for the gas volumes during the remaining years of the contract.

Although the rationale for the reneging was faulty, the action itself had important consequences. New long-term contracting was fatally impaired, not only for those who had reneged on their previous contracts, but also for pipelines and distribution companies that had not reneged. The spot market began to dominate the new relationships.

With final decontrol in 1985 (without the predicted “fly up” of prices), the New York Mercantile Exchange (NYMEX) established a set of futures contracts and, soon afterward, options contracts as well. Although these new contracts enhanced the process of price discovery and the management of risk, they also contributed a third, less often discussed feature to the gas market. The exchange-traded products have elaborate provisions for ensuring contract compliance, including a daily mark-to-market provision whereby the positions of the parties are settled every day, which prevents one party from getting deep into the pocket of the other party. Ather new institution is a clearing organization that automatically transfers cash between traders’ accounts at the end of each trading day.

The idea that exchange-traded contracts can substitute for regulation is not new (see Merton Miller, Financial Innovations and Market Volatility [Cambridge, Mass.: Blackwell, 1991], pp. 9–19). In the early 1970s, Milton Friedman and then–secretary of the Treasury George Shultz collaborated on the elimination of the Bretton Woods Agreement, which set rigid exchange rates between national currencies. At the same time, Friedman encouraged Leo Melamed of the Chicago Mercantile Exchange to initiate trading in foreign currencies, and in 1972 the International Money Market was established to do so. Miller observes that the clearinghouse effectively counteracts the moral hazard of trading between strangers, thus enhancing contract compliance.

Another, related development at approximately the same time was the formulation of the fair values for stock options by Fischer Black and Myron Scholes, “The Pricing of Options and Corporate Liabilities,” Journal of Political Economy 81 (May–June 1973). The formulation for commodity options followed, by Fischer Black, “The Pricing of Commodity Contracts,” Journal of Financial Economics 3 (1976): 167–79. In an important sense, exchange-traded contracts are a substitute for regulation in providing manageable stability in commodity prices, especially for energy. (For a more extensive discussion, see my article “A General Theory of Regulation and Deregulation,” in (De)Regulation of Energy, conference proceedings, United States Association for Energy Economists, October 27–30, 1996.)

The foregoing developments led to the fourth period MacAvoy analyzes, the decade from the mid-1980s to the mid-1990s. The futures and options contracts flourished. During this decade, the daily volumes of the futures alone rose to several times the daily consumption of natural gas. These contracts also reflected the growing use of natural gas for the generation of electricity. Today, the contracts no longer display a seasonality with prices higher in the winter months. Moreover, the daily volumes of the natural-gas futures contracts are equal to ten times daily consumption even during the summer months. This degree of liquidity is remarkable, and it suggests that these contracts are being used to hedge the price risk of electricity and perhaps the price of natural-gas transmission.

Another development in this fourth period was the 1991 unbundling of transportation services called for by the Federal Energy Regulatory Commission (FERC) in its Order 636. This unbundling has been a complicated process, which MacAvoy carefully describes. He performs a service to the policymaker by showing conclusively that these institutional changes, including the opening of pipeline access, have not given market power to producers or to any other segment of the industry. What is remarkable is that fully 80 percent of the gas transported by pipelines in 1997 was owned by companies other than the pipelines, albeit under firm contracts. The rationale of unbundling under FERC Order 636 was to promote competition, but as MacAvoy shows convincingly, the markets were competitive before and after unbundling. If anything, forced unbundling with regulated prices ultimately imposed rigidities on the system.

Did forced divestiture along vertical lines enhance competition? MacAvoy thinks not. My own view is that vertical integration aids in risk management by allowing a single owner to adjust output in response to volatile prices more quickly than can be done by recontracting, especially by regulated recontracting.

Clearly, many of the lessons MacAvoy offers are applicable to other regulated industries. A case in point is the current electricity crisis in California. Virtually all of the mistakes of natural-gas regulation have been repeated in the state government takeover of electricity in California, starting with the forced divestiture of generation from distribution and the elimination of long-term contracting. I hope that Paul MacAvoy will have the physical strength and the interest to guide us through the regulatory complexities of the electricity crisis in California and elsewhere. If he does accept that challenge, I expect his analysis to display the same high quality as his analysis of natural-gas regulation.

James L. Johnston
Heartland Institute and Amoco Corporation (ret.)
EnergyEnergy and the EnvironmentEnvironmental Law and Regulation
Subscribe Buy This Issue Get the App