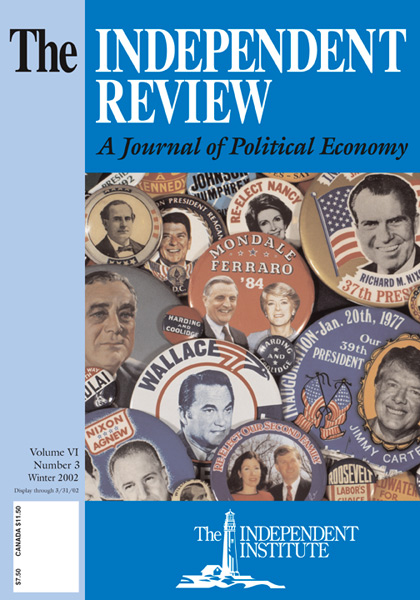 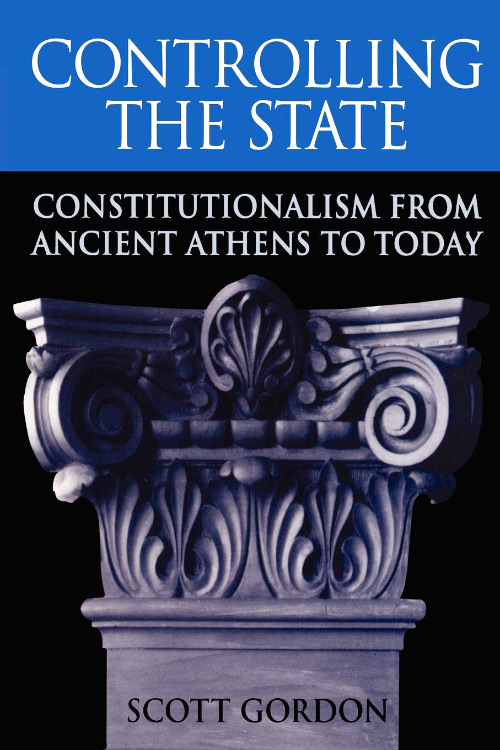 Controlling the State
Constitutionalism from Ancient Athens to Today
Scott Gordon
Hardcover Paperback
This book review appeared in the Winter 2001/02 issue of The Independent Review.

Scott Gordon’s Controlling the State combines under one cover two distinct realms of discourse. One realm is the intellectual history of conceptual formulations about the constitutional control of government, when that control operates through the organizational structure of government. Two of the book’s nine chapters treat these conceptual issues, though many of the other chapters present such material as well. The other realm is the actual conduct of government in several historical episodes that illustrate the author’s theme. These episodes are treated in seven chapters—on Athens, Rome, Venice, Holland, Great Britain (with separate chapters on the seventeenth century and contemporary times), and the United States. The chapter on Athens, for example, emphasizes not democracy and majority rule, but “that the institutional structure of Athenian government was the first major polity in history to have a nonhierarchical system of plural and mutually controlling authorities” (p. 77).

The bête noire in Gordon’s conceptual formulation is the doctrine of sovereignty. It is commonplace to speak of states as sovereign, with sovereignty denoting a locus of authority that is “absolute, indivisible, and permanent”(p. 22). For instance, a considerable literature has developed that speaks of public debt as sovereign debt, the idea being that public loans differ from private loans because no third-party adjudication can be called upon to settle disputes. If a sovereign chooses not to pay a debt, that refusal is the end of the matter, and the creditor must simply take his lumps. A sovereign is controlled by nothing besides his own calculus of interest. Sovereigns may pay their debts because they anticipate that they will want to borrow again, and they recognize that keeping their promises is good business. Any dispute between the sovereign and his creditors, however, will be resolved as the sovereign chooses.

The simplest formulations of sovereignty refer to an individual, such as a monarch, but sovereignty has also been applied to collective entities, such as a parliament or even the people in general. Gordon traces this doctrine of popular sovereignty back to ancient Greece and Rome, although “the people” was a much narrower construction in earlier times than it is in our age of universal suffrage and automatic voter registration. Sovereignty is used both normatively and positively, as Gordon notes (p. 35). Normatively, it is used to justify the activities undertaken by the state, as in a statement that legislatively sanctioned coercion is legitimate because it reflects the “will of the people.” Rousseau made the modern canonical statement of this position. To his credit, Gordon recognizes that, aside from explicit unanimity, the “will of the people” is a vacuous phrase. Indeed, the staying power of this phrase in contemporary discourse is surely strong testimony to the huge capacity for self-delusion that exists in our species.

Sovereignty also has a positive meaning, as a position of autonomous authority. Gordon associates this use of sovereignty most strongly with Jean Bodin, in the assertion that a position of sovereignty exists in every state. The positive task for political analysis is to identify the holder of sovereignty. In this respect, Gordon gives particular attention to the efforts of people such as Walter Bagehot and Albert Dicey to locate British sovereignty in Parliament.

A model of a polity in the presence of sovereignty must be hierarchical. A single person might hold the position of ultimate authority, or, some would claim, that position might be held jointly by everyone, no matter how mysteriously. Regardless of the particular model, there will exist some locus of final authority for political outcomes. Whether those outcomes are attributed to the will of the king or to the will of the people is an empirical matter of determining the locus of sovereignty. In any case, the Bodinian claim is that all states have such a locus of sovereignty.

Gordon does not dispute that states may possess sovereignty, only that they must. He argues that polities may be either hierarchical or polycentric (p. 16). Sovereignty exists in the hierarchical polity but not in the polycentric polity, which has no locus of ultimate authority but rather a number of nonsovereign authorities that check and balance each other. He describes this polycentric vision as the countervalence model.

A concern with the control of government, Gordon argues, must adopt polyarchy and not hierarchy for its analytical orientation. If the state is hierarchical, it cannot be controlled outside of the optimizing calculus of the holder of sovereign authority. For the state to be controlled beyond this optimizing calculus, political authority must be splintered and diffused among independent parties. Governance then comes to operate ultimately not through the commands or acquiescence of the sovereign but through a concurrence among multiple, independent sources of authority.

Gordon’s formulation of the countervalence model begins with the recognition, which he repeats several times, that the organized few will dominate the unorganized many. The countervalence model looks to the creation of numerous pools of organized power in combination with an organizational structure that requires concurrence among those pools of power. The result is “a network of independent entities that interact with each other, with no supreme authority” (p. 16).

Although the orientation of Gordon’s Controlling the State lies generally in a fruitful direction, overall the book disappoints me. Interesting bits appear here and there, including a number of citations that seem worth pursuing, yet when I close the book and ask how I must now rearrange my intellectual furniture, I have no answer. I find no conceptual formulations that I can bring to bear in illuminating one issue or another. The case studies are predictable and do not contain surprising formulations that arrest my attention. Nothing in the book leaves me feeling chagrined at not having thought of it first or so enthusiastic as to exclaim “that’s truly interesting, now I understand!” The book’s analytical framework is rudimentary and nonsystematic. For one thing, Gordon apparently made no effort to assimilate any of the recent scholarship on the emergent properties of decentralized orders. Yet these formulations, in which the outcomes of a process are not direct objects of anyone’s optimizing choices, are surely relevant to the material at hand. Among other things, this literature challenges Gordon’s foundational presumption that there is a choice between hierarchy and polyarchy with respect to social organization. Susanne Lohmann has in progress some fascinating work on universities as polyarchical, which stands in sharp contrast to Gordon’s claim that universities are among the many modern organizations that are hierarchical (p. 16). In Alienation and the Soviet Economy (Oakland, Calif.: The Independent Institute, 1990), Paul Craig Roberts argues that central planing is never an option to markets and that the Soviet Union was simply “a polycentric system with signals that are irrational from the standpoint of economic efficiency” (pp. 76-77). In short, someone interested in exploring how ideas about polycentricity can be brought to bear on the constitution of governance will have to look outside of Gordon’s Controlling the State.

Also left out of account in this book, yet highly relevant, is a consideration of whether polyarchy operates differently with private ordering than with public ordering. The polycentrism of markets and that of democratic polities differ in important respects. In a market order, you can choose your own preferred pattern of governance arrangements, and you can change that pattern by shifting your patronage. For example, by shifting your purchase of breakfast cereals from General Mills to Kellogg’s, you exit one governance arrangement and accept another. With political ordering, particularly at the national level, such shifting cannot be done. No matter how inferior you might regard the Environmental Protection Agency’s (EPA) water-quality regulation, as opposed to common-law governance, you cannot escape EPA governance. Sure, the EPA is just one node within a polycentric lattice, but you have no direct say over whether its policies can pertain to you. In the private arena, you are governed by the intersection of the claims of contending governors; in the public arena, you are governed by the union of those claims.

Although the historical chapters of Gordon’s book provide interesting material, much of that interest will reside in the inspiration it might give to others to probe more deeply into one or more of the topics presented. To illustrate with one small example: Charles Warren’s Congress as Santa Claus (Charlottesville, Va.: Michie, 1932) describes the legislative history during which the general welfare clause of the U.S. Constitution changed from a limit on Congress’s appropriation of funds to an understanding that whatever appropriation Congress might make is constitutional, provided only that the lawmakers affirm their intention to promote the general welfare by spending the money. It is simple enough to describe this history, as Warren does, and it’s clear that Gordon, too, describes in a related manner across his seven episodes, but the lessons we might learn regarding the constitution of governance will require the conjunction of a richer conceptual framework and a deeper examination of the concrete experiences illuminated by that framework. Gordon’s book will point you in the right direction, but it won’t take you very far by itself.