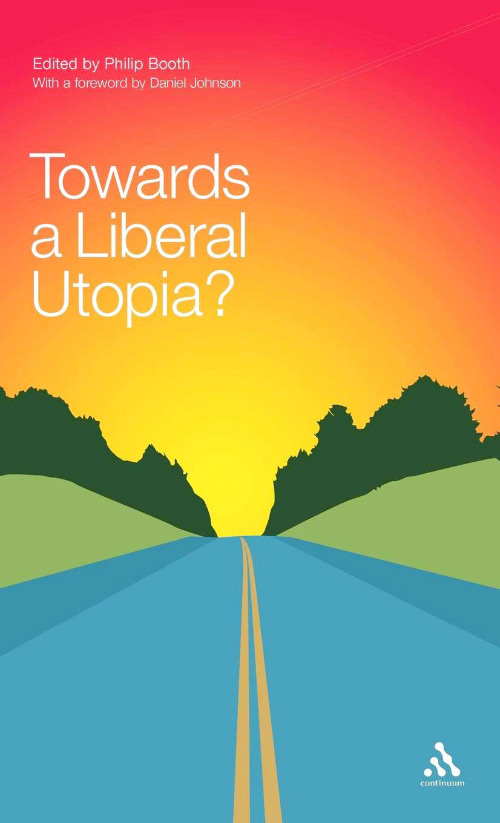 Towards a Liberal Utopia
Edited by Philip Booth
Hardcover Paperback
This book review appeared in the Spring 2006 issue of The Independent Review.

Towards a Liberal Utopia? may be described as a set of variations on a theme stated by F. A. Hayek in 1949. Writing at a time when liberalism in the classical sense appeared to be a superseded if not a discredited ideology, Hayek called on liberals “to offer a new liberal programme which appeals to the imagination. We must make the building of a free society once more an intellectual adventure, a deed of courage. What we lack is a liberal utopia, a programme which seems neither a mere defence of things as they are nor a diluted kind of socialism, but a truly liberal radicalism which does not spare the susceptibilities of the mighty” (“The Intellectuals and Socialism,” University of Chicago Law Review 16 [spring 1949], 433). The theme being stated for Booth’s collection, the variations are composed by twenty liberals who examine the whole area of public policy. They find it sadly wanting as arranged at present, and they suggest a set of reforms that would restore the framework of a liberal society during the next half century.

It is difficult to single out any one or two analyses and prescriptions in the book for special praise, but it would be a lazy reviewer who contented himself with a short summary of every contribution. Perhaps the two most significant contributions are Tim Evans and Helen Evans’ on health care in 2055 and Tim Congdon’s on the present weight and limits of the tax burden.

What makes Evans and Evans’s essay so significant is that health care is an area of public policy that will inevitably affect every member of a society. The scheme of education, though important, is something that affects most people hardly at all and from which escape into the voluntary sector is fairly easy for anyone who really wishes to escape. Much the same can be said for policing and social security. Europe, the environment, and the Constitution are undeniably important, but they have little perceptible impact on the lives of ordinary people. Health care, though, is something that we all require at some point in our lives, and most of us will require health care that is too expensive for us because we do not have the high income to buy easily in the voluntary sector—especially so once we have paid taxes to support the established scheme.

Evans and Evans describe briefly but powerfully how the British National Health Service (NHS) has failed to deliver on the promise of comprehensive health care made by its projectors. By every measurable standard, the NHS delivers results that are at best mediocre compared with those in other wealthy nations that have greater reliance on the voluntary sector. To these failings must be added the peculiarly British feature of long waiting lists for virtually every kind of treatment not immediately required for the saving of life. Health care in Britain may be in financial terms “free at the point of use,” but it is certainly costly—and heavily so—in terms of how long patients must wait for treatment.

There is an apparent escape from the NHS in the rebirth of a voluntary sector within which people may choose their own manner and times of treatment, and this sector is increasingly available to persons of ordinary income, but the escape is so far only apparent. Although people may try to escape from the structures of the British state, that state has not thereby given up its claim to manage their health. It is instead pursuing them into the private sector, where a growing burden of regulation prevents them and their physicians from agreeing on the most effective schemes of treatment.

Moreover, increasing surveillance seriously threatens individual privacy. The concept of confidentiality is fast vanishing from both state and voluntary health care. Just as soon as the computers can be made to work—in this regard incompetence and jobbery must be seen as freedom’s allies—it will be possible for the authorities to examine the medical records of everyone in Britain. The result may be the collapse of privacy, together with an intrusiveness that would have moved a Soviet commissar to envy. More likely, according to Evans and Evans, people will seek to evade the full intrusiveness of the system by deliberately withholding information from their records or by corrupting it in various ways. In this case, a system claimed to make health care more efficient because it purportedly makes information more readily available to those who need it will make health care less efficient. If medical records have been doctored to withhold embarrassing or damaging information about a person’s health, they will dangerously mislead those who rely on that information in an emergency.

Taxation also affects every adult in ways that cannot be fully escaped. Professor Congdon shows how taxation that takes between 40 and 60 percent of the national income either reduces the rate of economic growth or compels into the workforce those who may prefer to stay at home and bring up children. Either we must settle for reduced income, or we must accept changes in our personal lives that may not be desirable to many families.

Taken together, the essays in this book make a compelling case for a large and general reduction in the scope of state activity in Britain and, by natural extension, in every other developed country. With a smaller and more modest state, people would be freer and therefore richer and happier.

Yet how often has a compelling case overbalanced the pressure of special-interest groups? The Britain of today—the likely Britain of the future—is a country in which people are increasingly losing direction of their own lives. Although we are manifestly less free that we ought to be and therefore poorer and unhappier than we need to be, no sort of state activity fails to benefit some wealthy or well-connected interest group, and such groups are increasingly effective in using their contracts with government and their influence over the mass media to shut off debate on alternatives.

We do not live in a full democracy in which politicians offer competing views of how the state ought to be arranged and in which the people, informed and advised by an independent media, choose among the alternatives. Instead, we face a single political class that agrees to differ only on points of detail. We are informed and advised by media that have the same agenda—and often the same membership—as the political class. We face immensely wealthy and even ruthless corporate and noncorporate interests that have privileged access to politicians and media. Hence, although we can have no reasonable doubt that a return to liberalism would benefit the great majority of ordinary people, we live in a polity in which liberal critiques and liberal solutions are simply not offered, or in which they are discussed in terms that bias the mind against them in advance.

Still, those who do not try will never succeed. The future, as O’Brien says in George Orwell’s Nineteen Eighty-four, may be a boot stamping on a human face forever, but to prevent that scenario we need books such as Towards a Liberal Utopia? A chance still exists that an omniscient and therefore an omnipotent state will not be realized. If so, it will because liberals have indeed taken up Hayek’s challenge to think through and argue for a liberal utopia.