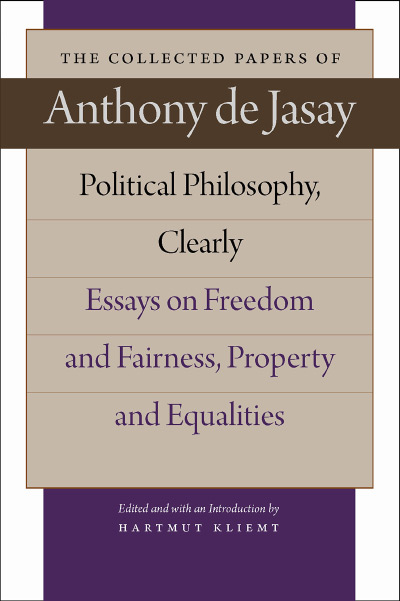 Anthony de Jasay’s work always repays reading. Working at the intersection of economics and political theory, Jasay has patiently articulated a measured critique of the state and a qualified defense of the notion that social order is possible without Leviathan. His writing is not only concise, but also witty and elegant. More important, Political Philosophy, Clearly, like his other work, bristles with provocative and interesting ideas.

Denying that the emergence of order requires either a social contract or positive legislation, Jasay argues that baseline conventions securing social order can, in principle, be self-enforcing (for example, pp. 5–7). The state is thus inessential. However, the temptation to create an entity with a monopoly of force is sufficiently appealing—because of its capacity to yield plunder for the favored—that “ordered anarchy” always runs the serious risk of being replaced by the state (p. 173).

Jasay seeks consistently to avoid reliance on the nondescriptive and nonascertainable. He opts for something like Hume’s noncognitivist reading of foundational moral judgments as embodying reactive attitudes rather than truth-evaluable propositions. Because people’s basic attitudes may differ extensively and persistently, deep-seated moral disagreements cannot be resolved by using narrowly moral arguments. However, like Ludwig von Mises, Jasay maintains that reason can still play a role in undermining the appeal of some possibilities by showing that the goals people putatively want to achieve simply cannot be reached by using particular means. Some policies are indefensible because, whatever we make of their presumed objectives, they are incapable of achieving those objectives. Some goals cannot be reached by using any set of deliberately chosen means. Realizing some goals carries costs that almost no one is willing to pay. And recognizing the existence of stable, self-enforcing conventions serves to limit our moral options: indeed, finding such conventions is the only way to identify “the Archimedean fixed point of metaethics” (p. 198).

Among the most deeply rooted of such conventions are those securing the property of first possessors, protecting the freedom of owners to transfer their property by contract, and ensuring the enforceability of commercial agreements (pp. 6, 96, 172). Where Hobbes supposed that a property system could neither exist nor function without Leviathan (pp. 321–22), Jasay seeks to show that Hume was right that basic property rules would emerge as stable conventions in a variety of bargaining situations (pp. 323–24). He emphasizes, for example, that allocating property to first possessors is an efficient, conflict-avoidant strategy to which there is no realistically superior alternative (pp. 75–76). More broadly, private maintenance of conventions— by means that range from shunning and public shaming to required restitution to the deterrent use of force—can keep anyone who wishes to ignore or upend these conventions from doing so without the need for a monopolistic law enforcement authority (pp. 255–67). And bargaining in the state of nature, even with the threat of force lurking in the background, need not yield equilibria that favor the strong over the weak because the latter have the capacity over time to impose costs on the strong and to lead the strong to anticipate future associated costs in ways that may dispose even the amoral among them to respect the possessions of the weak (pp. 324–33).

Nor is Leviathan required to ensure the satisfactory provision of “collective” or “public” goods (pp. 288–98). A standard argument maintains that such goods— necessarily to be available to every member of a given public if provided to any—will consistently be underproduced on the market because too many people will yield to the temptation to be free riders and so avoid contributing to the cost of providing them, so they must be delivered by a state with the power to fund them by using taxation (pp. 289–90). The argument is problematic for multiple reasons.

For one thing, we cannot say how much, if any, of a public good ought to be produced, if only because identifying a given quantity as optimal presupposes the dubious notion that interpersonal utility comparisons are possible. In addition, a putatively public good is indivisible because if it is made available to one person, it must unavoidably be made available to everyone. Thus, a single person’s or subgroup’s contribution may be essential if a good is to be provided at all. When someone decides whether to contribute to the delivery of a market-provided public good, there is a significant chance that his contribution or noncontribution will be decisive for the availability or nonavailability of the good. A would-be free rider runs a risk of precluding the availability of the good. The probability that someone’s contribution will make a difference is small, but the possible gain or loss resulting from his contribution or noncontribution can be substantial. And for someone who chooses to contribute despite the risk that others will attempt to free-ride, the magnitude of the potential gain increases with the number of potential free riders, whereas for potential free riders the risk of loss will increase as fewer people volunteer to be “suckers.” Thus, the likelihood of the public good’s voluntary production will vary with people’s valuation of the good; it is therefore reasonable to expect very valuable goods to be produced in the absence of coercive mechanisms designed to secure support for them (pp. 295–98)

In groups in which people frequently possess and use information designed to assess others’ trustworthiness, awareness of the likelihood of repeated interactions will dispose people to contribute to the provision of public goods (p. 291). Many or all putatively public goods worth providing can be offered on the market if the provider is willing to bear the cost of excluding free riders (pp. 293–94). And because the state is likely to engage in mischief and exhibit persistent inefficiency and favoritism if it is given the task of providing public goods (pp. 292–93), we have good reason not to see state provision as an attractive alternative to private provision.

Jasay returns repeatedly to his epistemological argument for the presumption of liberty (pp. 152–56, 170–71, 189–92, 213–19). The argument begins with the recognition that there are alternative ways of testing the validity of a proposition. He invites us to imagine someone (the defendant) intending to perform some act and someone else (the plaintiff) claiming that the defendant must be restrained because the act is undesirable. The defendant can provide good reasons for rejecting any number of claims offered in support of the view that the act is undesirable, but he can never prove that there are none left to counter or undermine. He can, so to speak, take wisp after wisp from the haystack, showing that each wisp of hay is not a needle, but without proving decisively that there is no needle in the haystack. However, what he cannot prove, Jasay argues, he should not be required to prove; the burden of proof cannot rest on him. Instead, it can and must rest on the plaintiff, who must know where the needle is to be found in the haystack if the claim that there is one is to be persuasive.

Appreciative readers will not always share Jasay’s analyses or his conclusions, of course. They may wonder whether he is right to question the advisability of rectifying past injustices sanctified by age (p. 23). They may inquire whether questions of justice arise in relation to sweatshop labor more frequently than Jasay seems to suggest (p. 33)—if, for example, local suppliers and foreign purchasers of sweatshop goods are not infrequently involved in bringing about the conditions on the ground that reduce the alternatives available to those who become sweatshop workers. They may be somewhat surprised to find Jasay treating patent protection as unproblematic (p. 202) because rules requiring respect for the kinds of putative rights that patents are purportedly designed to protect are precisely not the products of convention, but rather legislative enactments that constrain people’s use of just the sorts of property to which stable conventions might be thought to entitle them. They may wonder whether Jasay too quickly assumes that the modern state’s misdeeds are best explained primarily with reference to the behavior of shifting factions (pp. 160–62) rather than to an entrenched economic-cum-political elite and so whether redistribution by the state might not really be intended (contrary to the rhetoric of its supporters) precisely to enhance that elite’s position. And even those with Humean metaethical views may be curious whether rights may be brought into being only either by agreement—so that the agreeing parties have rights in relation specifically to each other—or through imposition, as by the state (pp. 23, 184), and whether it might sometimes make sense to identify particular claims as rights on solely moral grounds.

Whatever their questions and surprises, readers can certainly expect to be stimulated and challenged by Political Philosophy, Clearly. Jasay has shown clearly and helpfully that many difficulties often thought to render a free society unachievable or the maintenance of an expanding state inevitable are in fact surmountable. For his willingness to help us see that potential, as for his clarity and analytical rigor, all friends of freedom should be grateful.