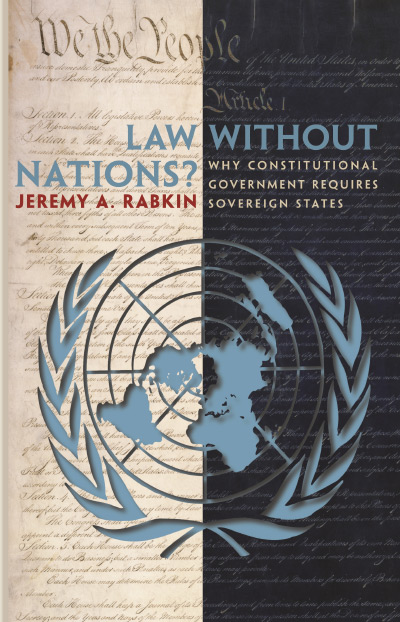 Since the end of the Cold War, the question of whether nation-states are and should be accountable to universal, transnational legal standards and to their adjudication and enforcement through supranational organizations has taken on special urgency. Calls for an expanded United Nations role or the establishment of an International Criminal Court provide a prominent example. The rise of the appeal of “legal supra-nationalism” is also evident in the turmoil surrounding the Iraq War. Critics argue that the United States violated international norms to remove Saddam Hussein, and even the president of the United States has emphasized his efforts to secure international endorsement of military action and continues to stress the multinational character of the invasion force. Jeremy Rabkin’s Law Without Nations represents a direct attack on these developments. Rabkin is suspicious of the motives that lurk behind arguments for transnational law and critical of the efficacy of existing international institutions. More important, he claims that submission to international legal standards and to the organizations that are supposed to supervise their implementation directly undermines normative commitments to self-government that are foundational to the liberal-democratic tradition, especially as understood in the United States. In contrast to visions of “global governance,” Rabkin argues that sovereignty, understood as the “right to make binding law in a particular territory” (p. 38), is central to the maintenance of effective, constitutionally constrained political systems that can protect individual liberty.

There is much to like about this book. Its author clearly cares deeply about the values he perceives to be under attack by advocates of global governance. The book is wide ranging and combines an impressive familiarity with the development of Western political and legal thought and detailed knowledge of contemporary history. Nonetheless, in the end the book is likely to leave many readers, including those sympathetic to Rabkin’s concerns, dissatisfied.

Law Without Nations can be separated into three general parts. The first part sets the stage by posing the debate over transnational law against the backdrop of current tensions between continental European governments and the United States over the conduct of U.S. foreign policy, in particular the Iraq War and U.S. resistance to the creation of the International Criminal Court. The next part consists of the theoretical heart of Rabkin’s argument. Rabkin traces the historical development of the concepts of sovereignty and international law, focusing on the works of Bodin, Grotius, Vettel, Rousseau, Hume, and Kant, as well as on the debates surrounding the American Founding. For Rabkin, this tradition places primary emphasis on the connections between sovereignty and constitutionalism. He argues that the rule of law, so central to Western conceptions of good government, emerges within sovereign states that can make and—highly important—enforce law within a specific constitutional framework that is accepted by citizens and therefore bestows legitimacy on political outcomes. According to Rabkin, in this tradition, international law plays only a limited role. It is understood as a body of norms that regulate the interactions of sovereign states, but leave each state to regulate its own internal affairs. Rabkin then turns to the development of U.S. foreign policy, arguing that since the Founding, American attitudes toward international affairs have not been (as is often claimed) isolationist. Instead,

U.S. policy is best understood as consistent with a limited understanding of international law, general opposition to submitting to the authority of international organizations, and placement of primary emphasis on the defense of U.S. interests.

Rabkin contrasts the vision of sovereign nation-states interacting under a system of limited international law that respects national sovereignty with a vision of “global governance” that calls for a radical expansion of transnational law to recognize universal human rights. His attack on the latter vision rests on two central arguments. First, advocates of universal, transnational law have typically ignored practical concerns about enforcement of the norms they advocate. As a consequence, Rabkin argues, much of what passes for international law lacks a fundamental characteristic of law: it cannot be reliably enforced against those who refuse to comply. As he puts the question, “But what exactly do we substitute by proclaiming that moral law is now really law, if we do not add reliable enforcement for that law?” (p. 33).

The second, more fundamental objection Rabkin raises to notions of global governance is that he sees such efforts as fundamentally in tension with a commitment to the ideal of democratic, constitutionally constrained self-government. Central to this ideal, which Rabkin identifies with John Locke, is the role of legislative authority in creating binding law. Within a sovereign, democratic state, policymakers are constitutionally constrained and ultimately accountable to citizens. In contrast, visions of global governance, Rabkin argues, often “short-circuit” legislative processes and thus undermine constitutional self-government by passing dimensions of sovereign authority to supranational organizations: “Global governance rests on the quite different premise that legislative consent to law is not so important to the authority of law. After all, in the perspective of advocates for global governance, there are no great choices left to make.... Systematically left out is the power of a legislature to determine a state’s own law” (p. 41).

In the last part of the book, Rabkin expands and illustrates this general argument in the context of detailed case studies of three areas in which the movement toward global governance has been especially pronounced. In chapter 6, he traces the development of the European Union as an example of the growth of supranational legal institutions, contrasting what he characterizes as European attitudes toward supranationalism with his view of the American tradition. In chapter 7, he examines efforts to enforce international human rights standards, and in chapter 8 he focuses on trade agreements, including the World Trade Organization and the General Agreement on Tariffs and Trade.

Without a doubt, Rabkin’s book represents a timely addition to an important debate. The perspective he brings to bear, including a healthy skepticism about the questionable normative commitments underlying appeals to transnational legal standards and a hard-nosed look at the actual efficacy of efforts to realize “global governance,” is provocative and perhaps underemphasized. At the same time, the book often lacks the analytical rigor that would make it a more serious challenge to advocates of global governance. At bottom, the book’s argument turns on the claim that the normative commitments Rabkin holds dear (limited government, individual autonomy, and consent-based politics) are fundamentally incompatible with a commitment to transnational legal codes, defined and enforced by supranational organizations. Yet this central part of the argument is largely asserted rather than being established through careful arguments. Moreover, for readers familiar with the insights of modern political science, in particular public-choice theory, Rabkin’s almost mystical faith in the ability of national political systems (specifically national legislatures) to realize “the public good” is likely to be perplexing. Although he surely identifies important deficiencies in transnational legal institutions as they currently exist, he largely glosses over similar inadequacies at the domestic level that are likely to introduce the same kinds of distortions that he fears at the international level (for example, the disproportionate influence of “elites” or special-interest minorities).

Rabkin also tends to lump together arguments and positions that are more nuanced and differentiated than he acknowledges. The book sometimes descends into mere polemical non sequiturs. For example, after recounting the Srebrenica massacre of 1995, in which Serb forces slaughtered more than eight thousand Bosnian Muslims while Dutch United Nations peacekeepers did nothing to intervene, Rabkin offers the following “explanation” for the actions of the Dutch soldiers: “It should not have been very surprising. In 1940, the Dutch relied on international law for their protection and were overrun by Germany in a matter of hours. A Dutch resistance movement did not develop for several years—well after the Dutch allowed their Jewish fellow citizens to be rounded up for extermination. Were the Dutch now going to take risks for people on the other side of Europe?” (p.180).

In short, Law Without Nations deals with a significant topic that is only likely to grow in importance as increasing global economic and political interdependencies give rise to calls for an expanded role for transnational governance. Rabkin’s plea for the importance of sovereign nation-states in protecting the values of individual liberty and autonomy that are the hallmark of the Western political tradition is provocative. Although the book does not present the strongest case that can be made for its position, its arguments should be taken seriously by those who clamor for supranational governance.