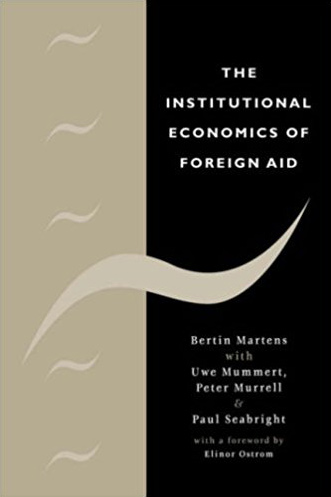 Foreign aid has been under a great deal of scrutiny lately, so you might wonder about the value of another book on this subject. The Institutional Economics of Foreign Aid, however, is different. Most critiques document the disappointing performance of aid (see, for example, Craig Burnside and David Dollar, “Aid, Polices, and Growth,” American Economic Review 90, no. 4 [2000]: 847–68) and the failure of promised panaceas (see William Easterly's brilliant book The Elusive Quest for Growth: Economists’ Adventures and Misadventures in the Tropics [Cambridge, Mass.: MIT Press, 2001]). This book is one of the few to analyze the organizations involved in aid and to ask, Does these organizations' structure of incentives work against the achievement of aid objectives?

Using a principal/agent framework, the authors analyze incentives inside the aid agency (chapter by Paul Seabright); the structure of relations among donors, contractors, and recipients (chapter by Peter Murrell); the donor efforts to reform institutions in recipient countries (chapter by Uwe Mummert); and the role of evaluation in foreign-aid programs (chapter by Bertin Martens). Each chapter presents a theoretical model and a number of examples to show how agency problems distort or derail the achievement of aid's promise to reduce poverty.

The book provides some important insights with a blunt but fair honesty about the dilemmas of aid. The chapter by Peter Murrell fits closest with my own experience in the World Bank, where I worked for twenty-one years. The authors are not carping critics; they suggest practical ways to improve performance.

For those not familiar with the principal/agent approach, it starts with a simple question: How does a principal, say the owner of a business, get the agent, the manager of the business, to do what the principal wants, such as make a profit? The answer, of course, is not as straightforward as the question. To give a current example, Will stock options encourage the manager to boost stock prices by raising profitability or by conducting fraudulent transactions?

As the chapters in this book show clearly, the principal/agent problems in foreign aid are formidable. A donor agency has multiple principals, such as the politicians who approve its budget and the taxpayers who foot the bill, and that condition makes for multiple objectives. Moreover, many other agents and principals are involved, including contractors, recipient agencies, and politicians and other principals in the recipient country. In such circumstances, who holds the agent accountable and for which of its objectives? These problems arise with any kind of public organization, but in aid agencies they are exacerbated by what Martens terms “a broken feedback loop” (pp. 14–15). It is broken because the people who benefit from the aid are not the same people who pay for the aid—indeed, they are not even in the same country. Taxpayers know when a government agency is not helping them, and their politicians may compete for election to office by promising to bring the wayward government agency into line, but taxpayers have difficulty in finding out how well an aid agency is doing its job.

Aid agencies not only have multiple objectives, but their objectives are often ill-defined and difficult to measure. Their ultimate goals are broad, for example, economic growth and poverty reduction; their proximate goals are more specific, for example, stimulating business with a better commercial code; and their immediate objectives are straightforward, for example, disbursing funds to a foreign contractor for advising the recipient on a new commercial code or lending money to the recipient government on the condition that it enact the new code. It is obviously much easier to judge how well the staff performed in getting the funds disbursed or in getting the recipient government to enact a new commercial code than it is to judge whether the code is being enforced and having the desired effect on the stimulation of business and hence on economic growth and poverty reduction. And if the reform fails, who is at fault: the donor agent or a recalcitrant recipient?

The principal/agent framework is a great improvement over the treatment of donor organizations and recipient governments as monoliths acting in unison for good or ill, but it is also somewhat misleading. Principal/agent theories treat organizations as if they were individuals or a bundle of individuals, all responding to similar incentives in the same way. The staff of organizations, however, are governed by rules, trained and inculcated with norms and shared assumptions, and placed in teams, all of which affect how individual agents respond to incentives. In this regard, the book's title is something of a misnomer because institutions in Douglass North's sense of rules, regulations, and norms are not its focus (see Douglass C. North, Institutions, Institutional Change, and Economic Performance [Cambridge: Cambridge University Press, 1990], p. 4).

Judging the performance of donor agents has become more difficult as donors have shifted from building roads or dams to trying to change laws and other institutions. Institutional reforms endure only if they are backed by supportive rules embedded in the social norms and networks of the country, a complication that donor agencies often ignore or minimize. The authors do a good job of analyzing the implications of embeddedness. As Uwe Mummert points out in his chapter, after a government has agreed to adopt a de jure reform, success in adopting the reform de facto “depends primarily on micro-level process[es] inside the recipient countries and their organizations” and not on the instrumental variables that aid agencies control (p. 113). Donors can control the extent to which they encourage recipient agents to deviate from Western ideals to fit the reform better to local norms and thereby to improve de facto laws or rules. Donors face a quandary clearly specified in Peter Murrell's chapter (pp. 69–111). Does the recipient agent want to deviate from the Western institution because of embeddedness or because the agent has been captured by local interest groups who oppose the change for self-serving reasons? The answer to this question has direct practical consequences for the amount of control the donors give recipient agents over project implementation.

In reading the book, I sometimes became frustrated with the theoretical nature of the discussions, although the authors do offer some compelling examples. Other support for some of their theories does exist. For example, the in-depth study of the Swedish Development Agency by Elinor Ostrom and her colleagues, one of the few empirical analyses of these issues, bears out many of their hypotheses (Elinor Ostrom, et al., Aid Incentives and Sustainability: An Institutional Analysis of Development Cooperation [Stockholm: SIDA, 2001]). Ostrom's team had unprecedented access because they were hired by SIDA's Department of Evaluation and Internal Audit. In ordinary circumstances, it would be difficult to get enough data to test the theories advanced in The Institutional Economics of Foreign Aid.

Although I agree with much of the authors' critique of aid and with many of their suggestions in this book, I find Martens' conclusion that some of the donor's agency problems can be solved by relying more on nongovernment agencies (NGOs) a very risky proposition. As Peter Murrell points out in his chapter, NGOs are interest groups whose goals are not necessarily aligned with those of the donors or recipients (pp. 98–100). Martens believes that the NGOs' single-mindedness can be put to work for the donors' goals, but I consider NGOs a blunt instrument to overcome the practical problems of institutional reforms. Frustrated aid agencies may find it appealing to rely on NGOs to put pressure on recipient governments or to bypass them, but NGOs are not elected and are not accountable to the wider public. Moreover, NGOs can be so empowered by donor financing that they have an influence on recipient-country policy far out of proportion to their local support, and the result may be a backlash against reforms. Further, NGOs in poorer countries are seldom held to any reporting standards. Donors and NGOs in developed countries may not have reliable information on the origin, board of directors, or sources of financing of the local NGOs they are supporting, especially because funds are often funneled through a long chain of subcontracts. Although many NGOs in developing countries are legitimate charities, a few are fronts for scams, radical ideological groups, and even criminal or terrorist organizations. Lack of transparency makes it difficult to assure that funds are used only to serve the donors' intentions.

The foregoing criticism aside, the book is a valuable resource for those who want a careful, objective, and scholarly assessment of some root problems of foreign aid and who perhaps require useful suggestions for how to make aid work better.