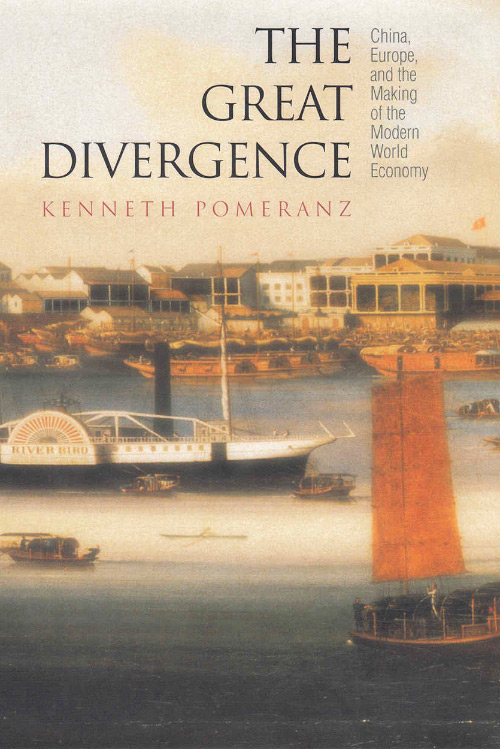 The Great Divergence
China, Europe, and the Making of the Modern World Economy
Kenneth Pomeranz
Kindle Hardcover Paperback
This book review appeared in the Winter 2003/04 issue of The Independent Review.

Why did the “Industrial Revolution” occur in northwestern Europe but not in China? This simple question has proven to be nightmarishly difficult to resolve definitively, although many explanations have been advanced. Kenneth Pomeranz’s The Great Divergence is one such effort and an exhaustively documented one. Does it resolve the question successfully? The answer is a qualified “yes.”

Pomeranz is chiefly concerned with the comparison between England and China, but he also devotes a fair amount of attention to the rest of the world. He shows that many of the characteristics often thought to be peculiar to Europe applied to China as well. Thus, many of the institutional features that were important for the breakout into dynamic growth were not uniquely European.

Pomeranz argues that many of the elements of the conventional wisdom about why China did not experience the explosive growth that characterized Europe after 1800 are seriously in error. China was not in the throes of a “Malthusian crisis,” heedlessly breeding itself into oblivion. The Chinese state was not the growth-choking anticapitalist machine that it has sometimes been portrayed as having been, and in fact it was probably less of a drag on private markets than were the states of mercantilist Europe. Chinese wage rates and standards of living could not have been too low to sustain the emergence of a robust consumer marketplace because they resembled the rates and standards in Europe. In other words, in many significant dimensions, China and Europe (or at least the core of China and the northwestern portion of Europe) had basically equivalent conditions.

A number of economic historians have argued that the tendency toward late marriage and other fertility-reducing practices in Europe (especially in the northwest) conferred a distinct advantage on the region, at least in terms of economic growth rates. Pomeranz argues that although some aspects of European marriage patterns were distinctive, the slightly different cultural tendencies in China were approximately as effective in achieving reduction in fertility. The Chinese simply were not breeding out to the Malthusian margin. Peculiar to Europe were some of the ways in which fertility rates were kept under control, not the fact of control itself. Hence, the key to understanding China’s failure to experience an “industrial revolution” like Europe’s in the eighteenth and nineteenth centuries is not to be found in differential fertility rates.

Another seemingly plausible hypothesis involves property rights and incentive effects, but Pomeranz minimizes the importance of the definition and enforcement of property rights in explaining the different development experiences of the two regions. He argues that China, too, had competitive markets and an elaborate legal system of property rights; in contrast, he also notes the plethora of institutions and laws antithetical to capitalist enterprise, ranging from apprenticeship laws to actual serfdom, that hampered economic development in Europe. Indeed, he suggests that China provided a freer marketplace than did mercantilist Europe. In connection with this particular factor, I think Pomeranz is wrong in suggesting that these institutional matters were irrelevant in the “European miracle” (hence, my qualified “yes” at the beginning of this review); surely the compatibility of the structure of property rights and incentives to capitalism was a necessary, albeit not a sufficient condition for achieving sustained economic growth. Nevertheless, Pomeranz does an excellent job of debunking the excessive emphasis on deregulation as the principal (or even the only) engine of economic growth.

What, then, does account for the “great divergence” of the book’s title? Pomeranz argues for the importance of two factors, essentially exogenous “shocks” outside the price system that had important effects on the economy: the distribution of energy-generating resources and the accident that Europe discovered the New World, whereas China did not.

The first argument might be termed “geology is destiny.” Coal was the chief energy-generating resource significant for the Industrial Revolution. The location of major coal deposits was a critical factor in determining the viability of industrialization. England’s coal deposits were located almost exactly where manufacturers would have placed them if they had had a say in the matter; transportation costs therefore were low and were made still lower by the ready availability of efficient water transport. Compare this development-friendly geographic distribution in Europe with the geographic distribution in China. Although China was blessed with large coal reserves, they were located for the most part in the thinly populated northwest, hundreds of miles from the potential manufacturing centers in the south and east. Thus, China was at a relative disadvantage compared to Europe in terms of the luck of the geological draw. At the same time that coal in eighteenth-century Europe was cheap and readily available to fuel industry, in China that resource remained relatively expensive and in large part a curiosity relegated to the collections of rock hounds.

The second argument is another variation on the “good luck versus bad luck” theme. The fortuitous (for Europe) circumstance of the discovery of the Americas and the subsequent availability of resources for the Industrial Revolution that this discovery entailed were the exogenous factors. The flow of cotton, sugar, timber, and tobacco to Europe from the New World gave economic development there a significant boost at a critical time; China enjoyed no advantage even remotely comparable.

The Great Divergence is a synthesis created from a rich array of secondary sources. In style and scholarship, it is reminiscent of E. L. Jones’s European Miracle: Environments, Economies, and Geopolitics in the History of Europe and Asia (Cambridge: Cambridge University Press, [1971] 2003), which is ironic given that the thrust of Pomeranz’s argument is exactly the opposite of Jones’s. Pomeranz’s book is a joy to read, and though it demands the reader’s close attention, it is accessible to those who are not economic history specialists. It is a very useful corrective to the overenthusiasm of writers who claim a unique status for Europe in terms of the preconditions for sustained economic growth.