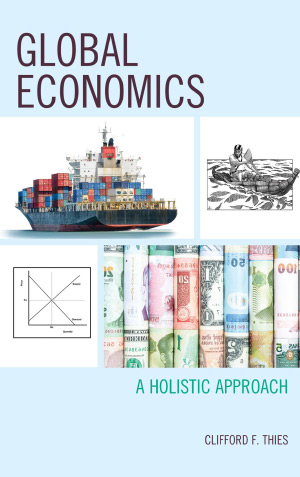 Global Economics
A Holistic Approach
By Clifford F. Thies
Kindle Hardcover Paperback
This book review is a web exclusive for the Spring 2019 issue of The Independent Review.

Clifford Thies describes his project in Global Economics: A Holistic Approach as exploring “both the integration of national economies into the global economy and the interaction of these national economies” (p. ix, emphasis in the original). Naturally, then, Thies—who teaches economics at Shenandoah University—explores political, economic, and legal aspects of international trade in this book. In building his narrative, Thies weaves in a brief history of humanity and explains trade policies and theories within their historical contexts. (See, for example, his discussion of Malthus and the Iron Law of Wages in Chapter 2.) This distinction sets Thies’s work apart from most other trade books that merely state and develop current theories without an eye to their deeper contexts.

By placing trade theory in historical context, Thies achieves two major goals. First, readers avoid falling into the all-too-common cognitive trap of thinking “well, modern theory is just so much better. How could those people back then believe the theories they propounded?” This attitude naturally gives precedence to modern ideas and causes the unreasonable dismissal of older ideas simply because they are older. For example, Adam Smith’s labor theory of value (Wealth of Nations, Indianapolis, IN.: Liberty Fund, 1982, pp. 82-104) may seem outmoded to a modern reader unfamiliar with the background, but it makes sense given its context: the historical data seemed to support it. In a mainly agrarian economy, where the marginal contribution of labor is likely higher than that of capital, prices appeared to reflect the amount of labor expended. It is only with the Industrial Revolution and the marginal revolution that the problems of the labor theory of value were revealed. A careful reader understanding this context can consequently reject Smith’s labor theory of value without rejecting Smith’s explanation of how the division of labor increases productivity. Thies does not make this analysis explicit, but it is implicit throughout the book, and it provides a good framework for an instructor to use those discussions to provide students with deeper insights into theoretical developments.

The second major goal is to focus the reader’s attention on the role of institutions as they affected the development of trade and trade policy. These institutions—whether they be legal (such as trade agreements, the topic of Chapter 5), or cultural/social (such as public opinion and influence, the topic of Chapter 4)—are sometimes suppressed or ignored in the conversation of trade theory and its implications. For example, the Samuelsonian models that permeate most modern teachings of trade economics—from Heckscher-Ohlin to the Standard Trade Model—explicitly ignore the role of governments, institutions, and social issues. While we are starting to see more attention focused on institutional and social arraignments in the development of trade patterns and the effectiveness of policy (see, for example, Dani Rodrik’s Straight Talk on Trade,Princeton, NJ.: Princeton University Press, 2017), these arrangements are largely ignored in standard textbooks. (A notable exception appears in Paul Krugman et al.’s International Economics, New York: Pearson, 2018, Chapter 10), where extensive attention is focused on political-institutional issues of trade policy.) Thies brings these social and institutional arraignments to the forefront and keeps them there, allowing for a deeper understanding of trade and trade policy.

As much as there is to enjoy with Global Economics, there are three issues—two of an economic nature and one stylistic—worth mentioning. The first occurs in Chapter 6, in the discussion of international capital flows. Thies writes: “For many years now, the United States has been running a current account deficit and, necessarily, has been exporting financial claims. In part, these current account deficits reflect the desire of the American people to consume more than they produce, financing the excess of their consumption by borrowing” (p. 100). Strictly speaking, this statement is not correct. The trade deficit does not imply that borrowing is occurring.

Consider the following example: an American in Maryland buys $100 worth of imported furniture from Sweden. Ikea then spends that $100 to purchase land in Iowa. This transaction would increase the U.S. trade deficit by $100—Americans imported $100 worth of additional goods with no corresponding increase in exports—but because the transaction occurred in cash, no debt is incurred. Despite the increase in the U.S. trade deficit, no American is thereby any further in debt. While the Swedes could have loaned the $100 to an American, such a use of those dollars is not necessary.

A second issue occurs in the same chapter. Thies writes: “Notice this flow of capital to the United States [as indicated by the capital account surplus] is the reverse of what economic theory says should happen. Economic theory says capital should flow from the wealthy countries to the poor countries of the world, promoting the economic development of the poor countries” (p. 101). Thies is referring to the fact that capital might have a lower rate of return in developed countries given diminishing marginal returns and that capital is relatively more abundant in wealthy nations compared to poorer ones. However, it is not the case that capital would necessarily flow to countries where the nominal return is greater. We must consider why there might be higher interest rates in poorer countries. Higher interest rates might exist because there is a greater risk of the likes of nationalization, vandalism, or corruption of the legal system. Investors in such countries might need to be “bribed” with higher returns, whereas in more stable countries the nominal return is lower because investments are more secure. Furthermore, capital is heterogeneous, and so its ‘flow’ across borders isn’t determined exclusively by nominal rates of return. If the people of poorer countries are relatively less educated than those in wealthier countries, more high-skilled capital would flow to wealthy countries while more low-skilled capital would flow to poorer countries. Investors take all these factors into account when making their decisions. It might very well be better to invest in a stable country with low rates of return compared to an unstable country with high nominal rates of return. Thies discusses these issues a little in his discussion on foreign direct investment and why it would be advantageous for entrepreneurs in emerging markets to invest in developed markets (pp. 104-105), but does not link it back to the theory discussed on page 101. Without linking these two discussions explicitly, the section on foreign direct investment appears to be contradictory.

A stylistic issue with the book is that it is difficult to determine which audience Thies has in mind. At times, Thies defines economic terms carefully (for example, his definition of comparative advantage on page 36), but at other times he offers highly complex discussions of advanced topics without any prior definitions. For example, when developing his discussion of comparative advantage, Thies then applies the concept in relation to indifference curves and utility functions without defining or discussing these concepts (pp. 37-38). One who has not encountered indifference curves and utility functions before might find the intuition of comparative advantage easy to follow but the graphical explanation more confusing than enlightening.

The aforementioned criticisms pale in comparison to the overall excellence of the book. Global Economics: A Holistic Approach is a valuable contribution to the trade literature, especially in the current political climate where protectionism and mercantilism are once again in vogue. In the tradition of Adam Smith, David Ricardo, Frédéric Bastiat, and other early trade writers, Clifford Thies does not limit his book to matters traditionally considered “economics” but broadens his discussion to all of humanity and its institutions, putting trade into proper context and providing valuable insights into the true nature of global trade. Too much discussion of international trade is focused at just the country level, where only costs and benefits to domestic actors are considered absent their institutional arrangements. Thies’s book is a powerful antidote to that overly-narrow focus on trade and an excellent admonishment that we need to consider all the pieces on the board, not just the ones that look like us or are segregated into arbitrary political groups.