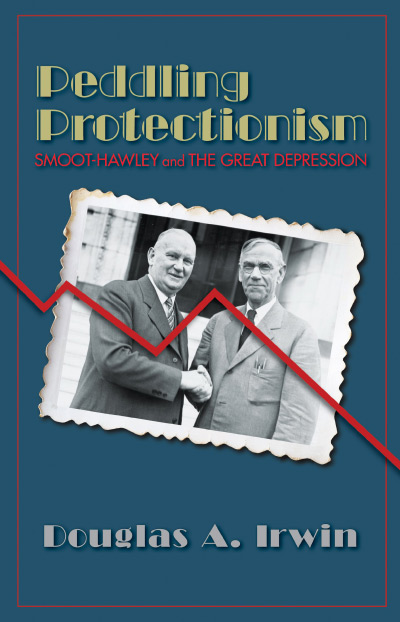 Peddling Protectionism
Smoot-Hawley and the Great Depression
Douglas A. Irwin
Kindle Hardcover Paperback
This book review appeared in the Fall 2011 issue of The Independent Review.

Douglas Irwin opens his book on the Smoot-Hawley tariff with a 1993 photo of Vice President Al Gore introducing Larry King and Ross Perot to the work of the late Senator Reed Smoot and Representative Willis Hawley. The occasion was a public debate on Larry King Live between Gore, a proponent of the then-pending North American Free Trade Agreement (NAFTA), and Perot, a politically ambitious businessman who, because he mistook his personal fortune as evidence that he understands economics, never bothered to think seriously about economics and therefore opposed NAFTA on grounds that American trade with lower-wage Mexicans would impoverish Americans.

No doubt Messrs. King and Perot had already heard of the Smoot-Hawley tariff. Yet it is equally without doubt that neither King nor Perot—nor, I suspect, Gore himself—knew more than a handful of pop-knowledge tidbits about this infamous tariff hike that was enacted in 1930.

Irwin’s little book—its text comprises only 226 short pages—would teach all three men a great deal about the Smoot-Hawley tariff. Only some of what they would learn would be consistent with their pop knowledge of the tariff; everything they would learn would deepen their understanding of trade, history, and politics.

This praise, however, is much too faint. Irwin’s outstanding book will teach even well-informed scholars a great deal about the history and politics that produced the Smoot-Hawley tariff as well as about its economic and political consequences.

Read Irwin’s book for the important details. Here is a summary sketch of the informative history you will find in Peddling Protectionism.

As modern protectionists never tire of reminding us, nineteenth-century and early twentieth-century America was no free-trading nation (if by “free-trading nation” we mean one with no tariffs imposed on domestic consumers who buy goods from producers in other countries; free trade did reign within this vast transcontinental nation). Uncle Sam’s tariffs, though, were a constant source of political discord. Industrialized northeasterners generally favored tariffs—and voted Republican; farmers in the rural South and West did not—and voted Democrat.

Overwhelmingly because of mechanization and advances in chemistry and horticulture, farmers throughout America—who were still almost one-third of the citizenry when Herbert Hoover was elected president in 1928—did not share much in the prosperity of the 1920s. Creative destruction was delivering their economic doom. So Democrats and “Progressive” Republicans aimed to solve the problem with government-enacted price supports and other such schemes to prevent market forces from directing resources away from agriculture and into other industries in which these resources would employed be more productively.

What’s a Grand Old Party to do? Answer: propose significant increases in agricultural tariffs so that farmers, too, will enjoy the prosperity that protection allegedly brings and conveniently also stop whining about the tariffs’ injustice. Newly elected Republican Party president Herbert Hoover thought this idea to be just grand. A month after taking office in 1929, he called on Congress to enact, in his own words, “an effective tariff upon agricultural products that will compensate the farmer’s higher costs and higher standards of living” (qtd. on p. 34). So much for the myth that Hoover followed doctrinaire laissez-faire principles.

Republicans went to work in the spring of 1929 on this tariff revision. The legislative horse-trading unsurprisingly got out of hand and went on tediously for more than a year. Not only were agricultural tariffs increased, but so, too, were industrial tariffs. The end result was the infamous Smoot-Hawley tariff, which increased the average tariff on dutiable imports from 38.4 percent to 45.4 percent.

Is Smoot-Hawley’s infamy justified? Irwin answers yes, but only in some and not all of the ways in which it is popularly identified as a singular policy blunder.

Also, Smoot-Hawley did not cause the Great Depression. Both the start of the Depression in August 1929 and the stock-market crash in October 1929 preceded the tariff ’s enactment by many months (although by October 1929 it had become likely that a major tariff hike was coming). Irwin notes more persuasively that because imports were a paltry 1.4 percent of U.S. gross domestic product in 1930, it is implausible that even a sizeable tariff hike played a major role in tossing the economy into the ditch. Furthermore, “[o]ver the course of U.S. history, import duties have changed many times without resulting in economic collapse or economic boom. For example, the much larger Fordney-McCumber tariff increase in 1922 was actually followed by a strong economic growth” (pp. 117–18).

None of the foregoing commentary suggests that Smoot-Hawley was not bad policy, though. It was indeed very bad. And it certainly did not achieve one of the chief goals that its proponents came to claim for it—namely, keeping unemployment in America low. But an economic policy can be bad without being responsible for all economic ills. And blaming Smoot-Hawley for problems that it did not cause makes all the more difficult the explanation of harms that tariff hikes do cause.

So what harm did Smoot-Hawley do?

This shrinkage eighty years ago in the volume of Americans’ international trade was in part the result of the worldwide plunge into recession. But it was not only the result of the recession. Irwin makes a persuasive case that Smoot-Hawley caused a sizeable chunk of the decline.

On the import side, “higher tariffs account for about a third of the observed 40 percent reduction in U.S. imports during the 1929–32 period” (p. 142). The even larger reduction in U.S. exports was caused chiefly by retaliation of foreign governments—especially in Canada and Great Britain—against Smoot-Hawley. From these facts, Irwin sensibly concludes that “Smoot-Hawley made the Depression worse for the United States than it might otherwise have been” (p. 219).

Some good eventually did sprout from Smoot-Hawley, however. Most important, it long gave protectionism a bad name (which is why the politically skilled Al Gore drew Americans’ attention to Smoot-Hawley in 1993). Also, Congress’s tiresome fifteen-month-long experience in crafting in minute detail the specifics of a massive new tariff schedule and in rolling so many political logs meant that nearly everyone (including many in Congress) came to see its direct tariff setting as a mockery of the ideals of democracy, so Smoot-Hawley remains to this day the last tariff schedule Congress ever set directly. (Says Irwin: “As members of Congress noted, the tariff bill was a mass of private legislation carried out with little regard for national interest” [p. 218].)

Beginning in 1934, with the Reciprocal Trade Agreements Act, Congress began the process of delegating to the White House the power to adjust tariff rates and to negotiate U.S. involvement in both bilateral and multilateral trade agreements. Though not perfect—because nothing short of unilateral free trade can earn this distinction—the tariff-setting and trade-negotiation processes since the Smoot- Hawley fiasco, such as World Trade Organization agreements, have dramatically lowered tariffs (from about 45 percent in 1930 to less than 5 percent today) and hence expanded American markets and opportunities.

No better guide to Smoot-Hawley’s history and consequences is available than Doug Irwin. His scholarship is impeccable; his reasoning is sure and never overreaching; and his prose is clean and direct. His little volume may not be the last word on Smoot-Hawley (Are there ever last words on any subject?), but it is to date the finest set of words devoted exclusively to that justly infamous spectacle of American protectionism.