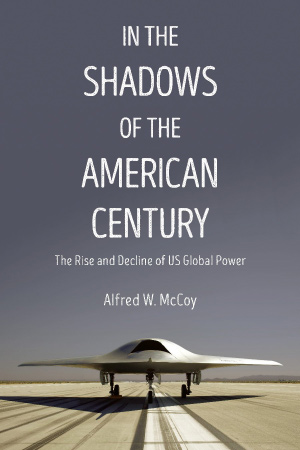 In the Shadows of the American Century
The Rise and Decline of U.S. Global Power
Alfred W. McCoy
Kindle Hardcover Paperback Audiobook Audio CD
This book review appeared in the Fall 2018 issue of The Independent Review.

Alfred McCoy, a historian at the University of Wisconsin–Madison, has spent much of his career researching the foundations, operations, and consequences of the American empire. In The Politics of Heroin in Southeast Asia (New York: Harper & Row, 1972), McCoy drew on fieldwork and interviews to document how the CIA was complicit in the Southeast Asian heroin trade as part of the U.S. government’s larger Cold War strategy. The CIA tried and failed to suppress the publication of the book and to have McCoy expelled from Yale, where he was a Ph.D. student at the time. His subsequent book, The Politics of Heroin: CIA Complicity in the Global Drug Trade (Chicago: Lawrence Hill Books, 1991), updated and expanded this argument, documenting how CIA involvement in the drug trade persisted over the intervening decades. According to McCoy, CIA involvement in fostering the global heroin supply was a key factor behind the U.S. heroin pandemic in the 1980s.

McCoy then shifted his scholarly focus to understanding the U.S. government’s torture practices. In A Question of Torture: CIA Interrogation, from the Cold War to the War on Terror (New York: Metropolitan Books, 2006), he documented the CIA’s development of psychological torture techniques, which can be traced back to the Cold War. The torture employed by the U.S. government following the attacks on September 11, 2001, was not an abnormality but, instead, had been a systematic feature of the U.S. government’s foreign policy since the Cold War.

Finally, in Policing America’s Empire: The United States, the Philippines, and the Rise of the Surveillance State (Madison: University of Wisconsin Press, 2009) McCoy traced the origins of the present-day U.S. surveillance state to the occupation of the Philippines, which began in 1899. At the time, the U.S. government established a stateof- the-art surveillance system to combat Filipinos who resisted the occupation and instead demanded their independence. The techniques and methods developed in the Philippines eventually returned to the United States and served as the foundation for the government’s current surveillance apparatus.

McCoy begins by providing a brief autobiographical account of his upbringing and time at Yale as a graduate student. This account includes a firsthand description of the CIA’s attempt to suppress his research on the U.S. government’s role in supporting the global heroin trade. A key theme that emerges throughout the book is the coherence of the U.S. government’s foreign-policy activities—complicity in the global drug trade, torture, surveillance, and investment in military technologies—in projecting the American empire’s power abroad. In developing a coherent picture of the American empire over the past 120 years, McCoy emphasizes three key phases.

The first phase began in 1899, following the Spanish-American War, when the U.S. government established direct colonial rule in the Caribbean and Pacific. This phase continued into the 1930s. Phase two began following World War II, when America established itself as a preeminent global economic and military power. During this phase, which lasted through the Cold War, the U.S. government employed a variety of methods to project its power, including direct military interventions, the forging of alliances with other governments, the establishment of international organizations (e.g., the United Nations and the International Monetary Fund), the establishment of a worldwide network of military bases, and significant investments in military-related science and technology.

In discussing the various methods of power projection, McCoy’s analysis makes clear the dark side of American empire. Many of the alliances the U.S. government forged were with brutal autocrats directly at odds with America’s core liberal values (see chapter 2). American leaders were (and remain so today) all too willing to trade off these values for commitments by foreign leaders to serve the interests of the U.S. government. The U.S. government’s complicity in the global heroin trade created a “covert netherworld,” providing crucial support to criminal syndicates, rebel groups, and clandestine government operations around the globe (see chapter 3). The development of the most powerful surveillance apparatus in the history of humankind facilitated the various activities of this hidden underworld (see chapter 4). Finally, in addition to employing psychological torture directly, the U.S. government exported its innovations to foreign governments around the world, who institutionalized these techniques as part of their normal operating procedures (see chapter 5).

If these various actions are taken together, it becomes evident that the projection of the American empire has had two significant and often overlooked costs. First, the activities of the U.S. government have often empowered brutal individuals and organizations, which has imposed real costs on innocent human beings. “The recent history of this shadowy domain,” McCoy writes, “has been marked by millions of deaths, massive fiscal malfeasance, and epidemic drug addiction” (p. 82). Second, the choices made by U.S. political leaders have resulted in moral rot due to the repeated adoption of extreme illiberal means under the guise of achieving liberal ends.

The third phase of American empire, which in McCoy’s telling began at the turn of the twenty-first century and continues today, involves investing in not only alliances and trade pacts but also tools for cyberwar and space warfare (see chapter 6). Among other things, this phase is defined by the development of a “triple canopy” of technology to enable the U.S. government to project its power over the lower stratosphere (up to an elevation of sixty thousand feet), the upper stratosphere, and the exosphere (two hundred miles above Earth). The technologies being developed include drones, satellites, and spacecraft that can potentially be used to surveil or strike targets around the globe.

McCoy ultimately concludes, however, that the American empire is in decline for a variety of reasons. Globalization has made it increasingly difficult to exert control over other governments. China has increased its economic and military power and is expected to continue to do so. Trust in the U.S. government has been eroded due to the revelations of the scale and scope of its surveillance activities, which have included actively spying on its own allies and citizens. The revelations of torture by the U.S. government at Abu Ghraib prison in Iraq and at the Guantanamo Bay detention center in Cuba have eroded America’s moral legitimacy around the world. This erosion of trust and moral legitimacy has been compounded by the institutionalized adoption of drones for offensive military strikes, which raises a host of ethical and legal questions. The ongoing quagmires in Afghanistan and Iraq have locked the U.S. government into an endless war that not only wastes monetary resources but further reinforces the prior erosions of legitimacy. As the empire continues to weaken, McCoy argues, the U.S. government will desperately seek to maintain its position of power in the world by further substituting military power for declining economic power in the desperate attempt to maintain its standing in the world. This effort, however, will only further exacerbate the aforementioned conditions driving America’s decline.

McCoy concludes by considering five scenarios that could contribute to the end of the American century: an evolving world order, climate change, economic decline, military misadventure, and World War III. It is possible that these scenarios might contribute to the decline of the American empire, but, as McCoy rightfully notes, they are not the only relevant possibilities. It is also possible that other offsetting variables will dampen the impact of any or all of the factors he identifies. The debate about whether it is truly the “end of the American century” is a contentious one (see, for instance, Joseph S. Nye Jr., Is the American Century Over? [Malden, Mass.: Policy Press, 2015], for arguments that it is far from over). Forecasting the rise and decline of nations is near impossible given that the world comprises overlapping, open-ended, complex systems beyond the grasp of limited human reason.

Given these caveats, here is what I take away from In the Shadows of the American Century. At a minimum, McCoy sheds light on the foundations of the American empire, how it operates, and the significant overlooked costs of the U.S. government’s militaristic foreign policy. This contribution is, in itself, extremely valuable and necessary. McCoy also identifies some of the key factors that pose potential threats to America’s standing in the world. Although we cannot predict the future, we can have a conversation about the nuances of these factors and what they mean for domestic and international policy. Finally, if McCoy is ultimately right, and the American empire fades away, his book will be a crucial source for understanding the causes of that decline.