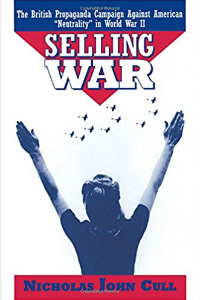 It is hard to believe that “propaganda” was originally a neutral term, in some circumstances even a positive one. Derived from the Latin propagare, it meant simply a systematic publicizing of a given doctrine or worldview. For years the prominent Roman Catholic theologian and publicist Bishop Fulton J. Sheen was national director of the Society for the Propagation of the Faith.

Only in the 1930s, with the rise of what was called the “totos” (totalitarian regimes), did the entire concept come to appear somewhat shady. Propaganda was what the other side disseminated, a dangerously one-sided presentation deliberately designed to manipulate a gullible public. Its role was to prevent the dispassionate analysis required for responsible citizenship, indeed for the very survival of one’s nation. Yet the term itself was not yet entirely discredited, being used unabashedly by the British government as late as 1941.

Hence the new study by Nicholas John Cull, lecturer at Britain’s University of Birmingham, is particularly welcome. It is a fine work, steeped in previously untapped British sources and showing a firm grasp of recent American research. Much of the source material is uncovered here for the first time. Cull writes that the British government “seems to have tried to destroy the evidence of its war propaganda in the United States” (p. 4).

It is hardly surprising that from September 1939, when Britain declared war on Germany, until December 1941, when the United States became a full-scale belligerent, John Bull made every effort to entice Uncle Sam into the conflict as an equal fighting partner. By the summer of 1940, Hitler had conquered almost all of western Europe and appeared about to invade Britain itself. By the spring of 1941, Britain had suffered the loss of Greece and Crete and was being pounded in North Africa. By the late fall Hitler’s army stood before the gates of Moscow.

In February 1941 Churchill downplayed his desire for full-scale American intervention, saying, “Give us the tools and we will finish the job.” Cull writes, “Of course, Churchill wanted more than ‘tools’” (p. 127), and once the United States had entered the conflict, Churchill confessed that the event was something he had “dreamed of, aimed at, and worked for.” The words worked for are the tip-off. Only with the publication of Cull’s study can we finally appreciate just how the British propaganda machine helped bring America to the brink of war, leaving it to the Japanese and Hitler to make Churchill’s dream a reality.

At the outset of the European war in 1939, the British had distinct advantages in seeking American aid: a common political and cultural tradition and several decades of informal political alliances. But there were also sources of tension: the British record in Ireland, India, and Palestine was widely perceived as oppressive; Britain still owed war debts to the United States; and Britain’s recent diplomacy in Ethiopia, Spain, and Czechoslovakia was less than distinguished. Further, some extreme anti-interventionists saw British propaganda in World War I as having enticed the United States into a destructive conflict.

British propaganda was subtle, and wisely so. For Britain to have done less than it did, writes Cull, would have been disastrous, for its citizens needed all the help they could muster. Yet had the propaganda been more heavy-handed or peaked earlier, it would have provided additional ammunition to already suspicious anti-interventionists. The battle to win American sympathies was not entirely uphill, for Americans had long detested Nazism and, from the outset of the war, were horrified by accounts of Nazi occupation, particularly in Poland. The bombing of British cities also shocked Americans, making the word Blitz a household term. To use the phrase of a media bureaucrat, the aim of British propaganda was to sharpen the “incipient inclinations” of its audience, that is, to “make friends friendlier.”

In the British propaganda effort, Cull shows, American foreign correspondents played a crucial role, as the British wisely cultivated a working relationship with the American press. The British manipulated specific instances of bomb damage, for example, by releasing in the United States photos deemed too gruesome to be shown at home. CBS’s Edward R. Murrow was so effective in conveying what the British were undergoing that Churchill offered him the post of codirector general of the BBC.

Knowing how important movies were to the American public, the British quickly established a beachhead in Hollywood. Alfred Hitchcock (Foreign Correspondent, 1940) and Alexander Korda (That Hamilton Woman, 1941) joined the American movie colony, serving as able emissaries. Also stationed in America were classicist Gilbert Highet and philosophers A. J. Ayer and Isaiah Berlin. Inside the British Isles a host of authors wrote propaganda with more than one eye toward the United States–political scientist Harold J. Laski, novelists Graham Greene and C. S. Forester (whose name Cull curiously misspells), and publicist Norman Angell, a converted pacifist.

Even World War II buffs will be surprised by some of Cull’s findings. Consider, for example, that President Franklin D. Roosevelt, meeting with King George VI at Hyde Park several months before the war broke out, assured the king that any bombing of London was bound to bring the United States into the war. When Paris fell to the Germans, FDR estimated Britain’s chances of survival as one in three. Far from “appeasing” the British, Roosevelt drove a hard bargain in the destroyers-for-bases deal (and, though Cull does not say so, in lend-lease as well). Within Roosevelt’s supposedly “Anglophile” administration, Assistant Secretary of State Adolf Berle harbored extensive suspicions of the British, as did FBI director J. Edgar Hoover.

The British propaganda apparatus, though seeming quite effective to an outsider, was riddled with bitter interdepartmental rivalries. Many of its early efforts were highly ineffective, and its early failures were “legendary.” Director of Information Hugh Macmillan was an utter disaster in his post. Churchill, though himself a master of words, saw only limited value in propaganda, whereas British ambassador Lord Lothian, despite having been sympathetic to Germany through Munich, was a surprisingly effective emissary. Lothian’s successor, Lord Halifax, British prime minister at the time of the Czech crisis, was initially an absolute dud in dealing with Americans. (Never leave your hot dog on a bench when leaving a baseball game, and never compare the game to cricket, much less add “except that we don’t question the Umpire’s decision so much in England” [p. 134].)

Cull confirms the popular picture of British security coordinator Sir William Stephenson without accepting as gospel the portrait in Stephenson’s self-serving memoir A Man Called Intrepid: The Secret War (New York: Harcourt Brace Jovanovich, 1976). Berle was not exaggerating when he claimed Stephenson was operating a “full size secret police” (p. 145) in the United States. Indeed, interventionist organizations such as the Fight for Freedom Committee were closely linked to this British apparatus.

A few of Cull’s statements are incorrect or misleading. Many of Roosevelt’s victories, including cash-and-carry, conscription in 1940, and lend-lease, received congressional approval by more than “the narrowest of margins” (p. 201). Roosevelt’s “Good Man” telegram to Prime Minister Neville Chamberlain was sent before the Munich Conference, not in its wake. And Porter Sargent’s anti-British bulletin was started before the war broke out.

All in all, however, Cull has contributed an extremely valuable book, crucial to understanding how the world’s greatest power entered the most destructive war of all time.

Justus D. Doenecke
New College of the University of South Florida
Defense and Foreign PolicyDiplomacy and Foreign AidGovernment and PoliticsPolitical History
Subscribe Buy This Issue Get the App