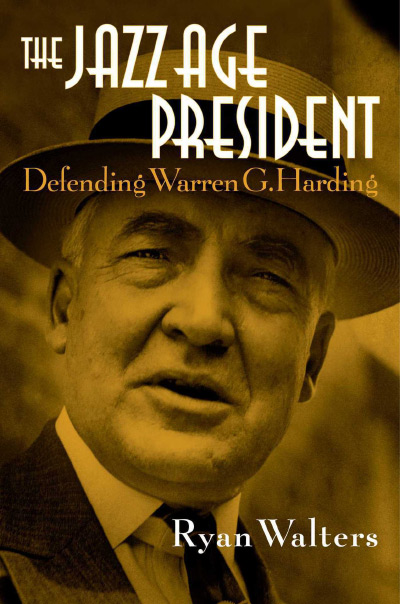 The Jazz Age President
Defending Warren G. Harding
By Ryan S. Walters
Kindle Hardcover Audiobook
This book review is a web exclusive for the Fall 2022 issue of The Independent Review.

Warren Harding has long been ranked among the least successful presidents in American history. Four prominent historian surveys ranked Harding at, or near, the bottom of presidential performance. Steve Neal (1982, Our Best and Worst Presidents. Chicago Tribune Magazine), Robert K. Murray and Tim H. Blessing (1994, Greatness of the White House, University Park: Pennsylvania State University Press, p. 16), and William J. Ridings and Stuart B. McIver (1997, Rating the Presidents, New York: Citadel Press) all rank him last in their respective samples. Most recently, the Siena College Research Institute, 2018, ranked him 41st in a sample of forty-four chief executives, above only James Buchanan, Andrew Johnson, and Donald Trump.

Harding’s two most prominent biographers add lukewarm assessments. Andrew Sinclair stated that “once in the White House, Harding was faced with the reality of power....He did too little too late, and he died too soon” (1965, The Available Man. New York: Macmillan, p. viii). Francis Russell comments that “I think it is indisputable that this country would have had a better history if General Wood had been elected president in 1920...” (1968, The Shadow of Blooming Grove: Warren Harding and His Times, New York: McGraw Hill, p. xvi). Additionally, Eugene P. Trani and David L. Wilson, (1977, The Presidency of Warren G. Harding, Lawrence Kans.: University Press of Kansas, p. 192), conclude that “he was an ineffective leader who suffered both personal and political scandal. It is not surprising that historians rate Harding a poor president.”

In recent decades, a small group of scholars have rallied to defend Harding’s presidential performance. Richard Vedder and Lowell Gallaway (2001, Reassessing the Presidency, John V. Denson, ed., Auburn, Ala.: Ludwig von Mises Institute, pp. 13, 16) concluded that Harding’s ranking among presidents should be much higher. More recently, Ivan Eland praised the Harding presidency and its legacy in Eleven Presidents: Promises vs. Results in Achieving Limited Government (2017, Oakland Calif.: Independent Institute, pp. 23–51), where he devoted an entire chapter to the accomplishments of the Harding and Coolidge administrations, concluding that “perhaps conservatives also should take another look at Harding.”

Ryan S. Walter, in The Jazz Age President: Defending Warren G. Harding, has authored a substantive book that sets out to redeem Harding’s maligned reputation. Walteremphasizes that the appropriate way to assess Harding is to carefully examine the evidence behind both his accomplishments and shortcomings. The result is a well-researched, well-documented and compelling case for viewing Harding and his administration in a far better light.

Walters describes Harding first and foremost as an “America First” nationalist (p. 7). This outlook was summarized during the 1920 election with his famous campaign slogan of a “Return to Normalcy.” His overall political outlook and philosophy reflected a populist reaction to the progressive agenda that had characterized the previous Roosevelt and Wilson administrations. His conservative platform called for fiscal prudence, political tolerance and civil rights, sensible foreign policy, respecting legislative branch sovereignty, and prioritizing American domestic concerns.

Harding made fiscal prudence a cornerstone of his policy outlook. There were two policy achievements that demonstrate this. The first incorporated restraint. In 1921, the nation sank into a recession in the wake of World War I. Rather than intervene, Harding and Treasury Secretary Andrew Mellon chose a non-interventionist response. The economy rapidly recovered. In the second instance, Harding and budget director Charles Dawes managed to shrink the size of federal government non-military expenditures, a feat that has not been replicated since the 1920s. (pp. 93–95, 104–107).

The president also promoted a culture of tolerance. He liberally pardoned Great War objectors, most notably Eugene Debs. He also promoted rights for African Americans, arguably being the most pro-civil rights president between the Civil War and the Civil Rights Era (pp. 145–152).

Although Harding opposed the League of Nations, he enacted a successful foreign policy. This included repairing ruptured relations with Latin American nations. It also included the start of international disarmament talks, which ultimately culminated in the Dawes Plan of 1924 (pp. 124–130).

Walters is transparent in identifying Harding’s shortcomings. The administration was dealing with three notable scandals at the time of Harding’s death in 1923. His personal life included extramarital affairs. A few of his cabinet appointees turned out to be failures.

Yet, these shortcomings need to be balanced against Harding’s accomplishments. Walters notes that the president “did not try to cover anything up...he dealt with the problems as they emerged” (p. 185). He also should be credited with the plethora of strong selections that he made for key executive and judicial branch appointments. These include vice-president Calvin Coolidge, cabinet members Andrew Mellon, Charles Evans Hughes and Herbert Hoover, budget director Charles Dawes, and Supreme Court justice William Howard Taft.

Walters notes where Harding has been unfairly treated in comparison with other presidents. He certainly strayed in his personal morals, yet he has been criticized far more harshly than later presidents John Kennedy and Bill Clinton. The scandals that he has been castigated for were not any more severe than similar events often found in later administrations.

Harding, despite his human shortcomings, possessed many admirable personal characteristics. He ran a successful newspaper business and was well-liked by his employees (p. 154). He was a genial and friendly personality to all who knew him well.

Jazz Era President provides convincing evidence that Harding was held in high regard by both his fellow Republicans as well as the American people. Harding was selected to deliver President Taft’s nominating speech at the 1912 party convention. In 1916, he was chairman of the party’s convention. As senator, in September 1919 he provided one of the leading speeches in opposition to the League of Nations (pp. 12, 180). These important assignments evidence that Harding was well-respected by his party. Harding also was elected in 1920 by the highest popular vote percentage margin in the one hundred years since 1820. In 1924, Calvin Coolidge, running on a continuation of Harding’ policies, was elected by the second highest margin during this period. The evidence demonstrates Harding’s popularity.

The ultimate endorsement of Harding’s manner of governance was the fact that his successor, Calvin Coolidge, essentially left the Harding agenda in place for the following five and a half years as the nation prospered. While they made for good newspaper headlines, the “scandals” that later opponents criticized had little or no significant national impact beyond Harding’s time in office.

Jazz Era President makes a key argument that Harding’s reputation has long suffered because of the many contrasts with his predecessor, Woodrow Wilson. The Wilson administration aggressively engaged in Progressive Era policy, growing the role and scope of the federal government. The United State also entered World War I and Wilson strongly argued for American participation in the League of Nations. Harding’s outlook and policies sharply differed and represented a rollback and repudiation of virtually all of Wilson’s initiatives.

Harding created a vision that guided Republican governance of the United States from 1921 to 1929. This episode was sandwiched between the Progressive Era and the New Deal Era. Walters describes the Harding agenda as an attempt to fully address the needs of a modernizing twentieth century while simultaneously shrinking the overall reach of the federal government. As an example, Harding endorsed legislation to support a national highway system (p. 187). Yet, at the same time, he also operated the executive branch with a look to the past, supporting a more limited role for the national government consistent with a strict interpretation of the Constitution. In large part, this explains why many historians have treated him poorly in historical ranking. Harding trusted American business and its citizens, believing that government should only engage in everyday American lives when necessary. This sharply contrasts with the ever-growing federal bureaucracy that arose in the 1930s and that has epitomized American government ever since.

An area where Walters could be challenged is his evaluation of Harding in comparison to President Donald Trump. He notes that Trump ran a Harding-like campaign with a message of “making America great again” that aligned with Harding’s “return to normalcy” (p. xii). Although the comparison seems plausible on the surface, it deprives Harding for the full credit that he deserves. Harding was far more popular, possessed a more genial personality, and generated more consensus on policy issues than Trump.

Ryan Walters has authored a very admirable and important contribution to the growing literature on Warren Harding’s performance as president. He provides a compelling case based on objective accomplishments. In large part, Harding’s reputation has been sullied for political reasons by subjective and self-serving criticisms after his death. The Jazz Era President provides a compelling case for reassessing Warren Harding. Importantly, this book provides an example of successful conservative governance in a modern economy. The Harding presidency’s achievements offer foundational policy benchmarks to consider for our own time.

John A. Moore
Walsh College
American HistoryGovernment and PoliticsLaw and LibertyPolitical History
Subscribe Buy This Issue Get the App