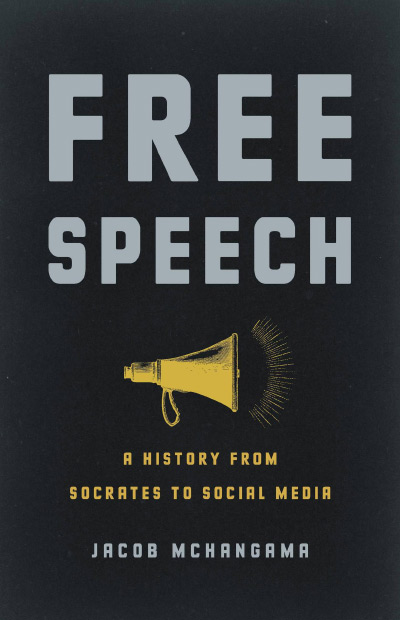 Free Speech
A History from Socrates to Social Media
By Jacob Mchangama
Kindle Hardcover Paperback Audiobook
This book review is a web exclusive for the Fall 2022 issue of The Independent Review.

Everyone knows that the history of free speech is replete with examples of “free speech for me, but not for thee.” The excuse that “I’m for free speech, but [insert exception here] goes too far” is one of the oldest in the book. There have been many free speech champions, but few could withstand the temptation of censorship when it came to one’s own reputation or pet causes. Once the tables had turned, the once censored became the censor. Radical Enlightenment figures like Voltaire, Diderot, and d’Alembert were not exempt from this trend. The history of free speech is a history with many villains, few heroes, and more than a few fools.

Jacob Mchangama’s excellent new book, Free Speech: A History from Socrates to Social Media, is breathtaking in its scope, covering twenty-five hundred years in a breezy, easy to follow style. Yet it is strikingly scholarly and highly detailed, but not overly so. I dare say it would make good beach reading for the dog days of summer.

While Mchangama is clearly a partisan of free speech and the Enlightenment, he is fair and thoughtful as he details important events and movements through the last twenty-five centuries. He credits the medieval period, despite its penchant for censorship, with developing a culture of curiosity, fertile ground in which the first universities were planted. He admits that there are legitimate concerns about misinformation. At times, free speech has permitted demagogues to gain power, mobs to savage dissidents, and truth to be drowned in error—at least, in the short term.

Most importantly, his account avoids a common pitfall of depicting the history of free speech in developmentalist terms. Generally, this developmental format proceeds through three stages. There is the dark age of yesteryear, followed by a period of struggle between the armies of darkness and the armies of light and, behold! Truth wins out! This tripartite history is a tired trope. It was dubious when Joachim of Fiore used it eight hundred years ago and it hasn’t aged well. Mchangama wisely avoids it. Instead, he provides a nuanced and carefully researched account of free speech, where and how it has triumphed, what principles are at play, and how we might think about the value of free speech today given what we can learn from its history.

The history begins with Socrates and Athens. How could it not? Athens had a culture of widespread free speech through two related concepts. Isegoria, “equality of public, civic speech,” and parrhesia, “‘frank’ or ‘uninhibited’ speech” (p. 13). Citizens exercised isegoria in the Athenian Assembly as citizens. They could speak on any question, but there was what we might think of as an academic or aristocratic tinge to the exchange. This was a time for thoughtful, civil debate. Parrhesia was protection for expressing opinions outside the assembly. In contrast to isegoria, citizens could be bold and even insulting in the theater and in discussions with other citizens. We witness parrhesia in Plato’s dialogues.

These Greek concepts implicate egalitarianism in the sense that all citizens could exercise free speech in these forms. Citizenship was not universal, of course. But the principle of free speech and its link to participatory democracy were clearly established. Essential to this freedom is the ability to criticize one’s own political system, “still a litmus test of democracies, both past and present” (p. 14). Demosthenes was one of the great defenders of free speech in the Athenian system. Many of the principles we value in free speech culture today such as “free speech is essential to furthering truth” and “it is one’s moral obligation to listen to all sides of an argument” are there in Demosthenes (p. 14). Arguments we read in free speech classics like John Milton’s Areopagitica and John Stuart Mill’s On Liberty are not new, but recapitulations of these old pleadings for free speech from that ancient democracy.

In contrast to the Athenian principle of egalitarian free speech, ancient Rome permitted some free speech as part of its libertas, but only for the elites of society. Rome distinguished between liberty and license. Slander was punishable by death. Political discussion was free, but only in the Senate. Even there, it was regulated by principles of rank and seniority. To the Romans, the Greek system was one of license, dubbed by Cicero an “immoderate liberty” (p. 23). The political freedom of the Romans included equality before the law, due process, some voting rights, and the like, but no equivalent of parrhesia and no equal right to speak even between distinguished citizens.

The contrast between elitist free speech and egalitarian free speech has played out over the millennia. James Madison captured the differences between the two understandings of free speech perfectly in his opposition to the Alien and Sedition Acts. The British aristocratic system protected elites in Parliament, but the American republican system protects public discussions among citizens. Elite panic today over misinformation is a current form of this elite view of free speech. We plebeians can’t handle misinformation so our patrician guardians in Washington, Silicon Valley, and Brussels best protect us—for our own good, of course.

There are a number of historical notes that make the book eminently interesting, such as the ambiguous role of “enlightened despots” in championing free speech. Russia’s Catherine the Great championed free speech before doing an about-face and becoming “the first ruler in Russian history to erect an official and systematic regime of censorship” (p. 184). She would not be the last.

An essential lesson from the history of free speech is how censorship can backfire upon the censors. This happens in several ways. I will limit myself to three. First, free speech and widespread knowledge that it tends to generate can result in turmoil. But what is the alternative? Gutenberg’s press unsettled our understanding of nearly everything over the decades and even centuries by letting new ideas “go viral.” The Islamic world rejected the new technology outright and tragically fell behind the West in nearly every way. The lesson here, and this is essential to truly understanding free speech, is that the tenuous nature of human society is unavoidable. The great hubris of rulers is that they can control speech and ideas without detriment. They can’t. Free speech comes with risks, but a fair reading of the history shows that the certainties of censorship are a charade and more damaging than the perils of free speech, especially over the long run.

Second, exceptions to free speech, however much we might sympathize with their aims, have a way of taking on a life of their own and expanding well beyond their original limits. Hate speech or group libel is an oft-cited necessary exception to a vibrant free speech culture. But whatever you think these terms mean, the people you dislike the most will define them differently and to their own advantage. Once, a conception of group libel was used to silence critics of slave owners. The Soviet Union used it to suppress dissidents. Today it is used by various regimes to justify blasphemy laws. Eleanor Roosevelt had warned against such exceptions when helping to draft the Universal Declaration of Human Rights after World War II. She has been proven painfully prescient.

The argument is usually framed as criticism of this group will lead to violence. But what evidence is there that censorship actually stops violence? Is speech really the source of hatred? There is a great deal of historical examples of censorship generating increased attention and sympathy for a movement or cause. Attempts to silence are a good way to turn a monster into a martyr. This happened to Hitler, but he is only the most egregious example. There are others. Also, like Hitler, censored individuals do not go away. The value of permitting bigoted speech is that the rest of us are aware that those people are out there. Many were driven off Facebook and Twitter for racist speech in 2020–2021. Those people are now connecting through encrypted apps. Is their movement growing? Are they networking more than ever? It is difficult for the rest of us to know. When they were free to join the mainstream social networks, we at least knew who some of them were and how many.

Finally, perhaps the most chilling lesson from the history of free speech is how often the very laws—not just the concept of censorship laws, but the very same laws—are used by a new regime with the legitimacy conferred by the very regime that was replaced. The Nazis were censorious, sure. But the initial laws they used were developed under the Weimar Republic as an illiberal effort to preserve liberal democracy. The British colonial laws suppressing speech in India and Hong Kong are used today by very different regimes to silence dissenters. Should that give us pause in our own efforts to squelch undesirable expression?

Thomas Jefferson said the price of liberty is eternal vigilance. We can supplement this adage with T.S. Eliot’s, that there are no lost causes because there are no gained causes. As Mchangama shows, free speech has been won and lost many times, never truly defeated for good, but also never permanently triumphant either. Free speech must be continuously pursued and defended, and those in pursuit must hold to the essential virtue of humility lest at the very moment of victory, when free speech is ascendant, they become the monstrous censors they opposed. As this history illustrates, better persons that you and I have succumbed to that very temptation.