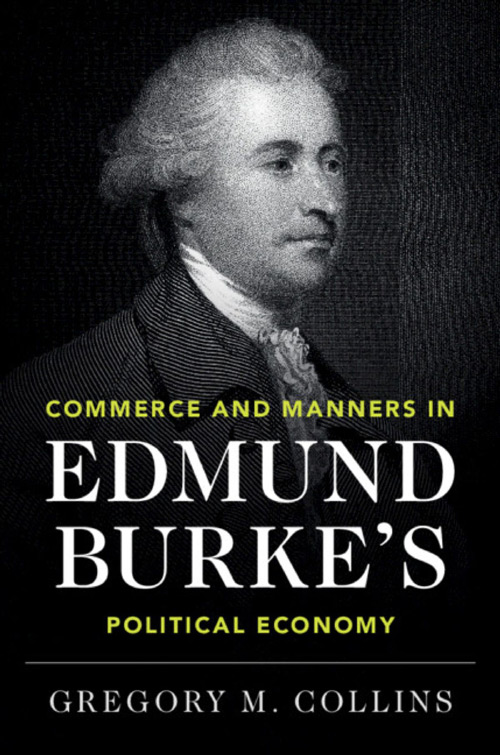 Commerce and Manners in Edmund Burke’s Political Economy
By Gregory M. Collins
Kindle Hardcover
This book review is a web exclusive for the Fall 2021 issue of The Independent Review.

Early in his career, Edmund Burke was known to his contemporaries as a Whig reformer. He is known to most readers today as a conservative traditionalist. Might he also have been a radical?

That overstates the possibility. But in this penetrating and important new study, Gregory Collins forces the question of what he calls “Das Edmund Burke problem”: Can the conservatism of Burke’s politics be reconciled with the disruptive implications of his political economy? Collins answer is that it can be. In the course of the reconciliation he affects, Collins illuminates long neglected aspects of Burke’s thought.

The traditionalist Burke, most fully seen in Reflections on the Revolution in France, is the scourge of the abstract “rights of man” and the champion of prudence. But Collins convincingly shows that Burke’s endorsement of free exchange both within and outside the British Empire, which preceded Adam Smith’s in The Wealth of Nations, flirts with natural rights, breaks with a centuries-old moral consensus that deprecated profit-seeking, and elevates innovative economic ideas over tried-and-true social arrangements.

Burke’s most explicit and extended—though, as Collins demonstrates, hardly his only—exploration of political economy is his 1795 memorandum “Thoughts and Details on Scarcity.” Directed against attempts to regulate the price of grain in the face of a shortage, the pamphlet “discern[s] poetry in the elusive motions of England’s internal grade trade.” The price system is one theme of that poetry: Burke anticipates Hayek by showing that prices collect diffuse strands of information in a way government, operating from the center, cannot. (One of Collins’s more intriguing insights, later in the book, unites Burke’s conservatism and liberalism by noting that tradition is to politics what prices are to economics: a means of aggregating dispersed wisdom.)

“Thoughts and Details” also addresses “one of the most neglected areas of [Burke’s] economic thought” (p. 59): his endorsement of “middleman” trading activities. Middlemen buy and sell commodities before they reach the consumer, provoking popular resentment on the false belief that they simply leech off the economic system. Burke argues, instead, that middlemen add value to commodities while helping to collect decentralized information. For Burke, their activity is noble.

Burke’s rejection of zero-sum economic thinking is also key to his attack on mercantilism: Free exchange between nations, like free exchange within them, could add to the value received by all parties to a transaction. It could, moreover, “infuse a spirit of political conciliation and social communion into all its participants” (p. 308). Collins dates this endorsement of free exchange to Burke’s statesmanship and speeches in the 1760s, well before Smith’s celebrated dismantling of mercantilism.

But Burke’s approach is not Smith’s, at least not precisely. Among the reasons Collins resists forcing his subject into later, doctrinaire categories like laissez-faire or libertarianism is that Burke’s political interests superintend economic ones. Collins writes:

[O]ne glaring difference between Burke’s economic thought and political thought was that the former was ultimately subordinate to his broader defense of the British Empire. Although the enlargement of trade was a chief object of Burke’s legislative activity, he believed that commerce should not dictate the foreign policy of Britain. . . . The wealth of nations was a worthy aspiration, but the honor of nations was an even nobler aim. (p. 531)

Still, politics could also corrupt markets, and vice versa, as Burke’s statesmanship on India shows: “[T]he most important lesson of Burke’s commentary on the political economy of British India was his ominous warning about the destructive effects originating from the transformation of government into a market for profit” (p. 401). Among the consequences was the exact kind of zero-sum economics that Burke rejected in the case of free exchange. The British East India Company, operating as a de facto government-for-profit, simply extracted wealth from India, prompting Burke to declare: “Every rupee of profit made by an Englishman is lost forever to India” (p. 398).

Collins’s admirably synoptic account distills Burke’s political economy from every nook and cranny of his writings and statesmanship. While Collins skillfully covers better-known works like “Thoughts and Details on Scarcity” and the Reflections, he comes across many of the book’s most important insights away from the beaten path.

In 1757, for example, Burke and his friend Will Burke published An Account of the European Settlements in America. This work has largely been neglected by Burke scholars, perhaps owing to its co-authorship. But Collins uses it as an early demonstration of, among other topics, Burke’s thinking about labor and commerce—as opposed to bullion—as the basic determinants of economic value. Collins’s attention to Burke’s parliamentary activity pays similar dividends. Among other illustrations, some of Burke’s earliest thinking on mercantilism and free exchange emerges from his parliamentary sponsorship of the Free Port Act of 1766, which established open trade between Britain and the West Indies.

Burke’s culminating views on political economy are found, for Collins, in the last place many Burke scholars look: the Reflections. The book is rich with observations about political economy generally and about the economy of revolutionary France specifically, yet the tendency has been to pass by these in search of Burke’s conservatism. The Reflections is certainly conservative, but Collins makes a compelling case both that it underscores Burke’s economic liberalism and that it demonstrates the limits he placed on it. “While ‘Thoughts and Details’is the beginning of Burke’s intellectual conception of political economy,” Collins argues, “the Reflections is the conclusion of it” (p. 406).

The Reflections encompasses a variety of views at the intersection of politics and economics, including the constitutionally stabilizing influence of landed property. This is the basis of Burke’s endorsement of prescription, the Roman law of long usage. It is also among the reasons for his assault on the “monied interest” in revolutionary France, the rising class of lenders whose “toxic defect,” in Collins’s words, was their “role in detaching man from the roots of local community. While family and friends with landed property were bound together by timeless social associations, financiers thirsted for a quick profit, and could move their capital beyond the edges of the commonwealth” (p. 450).

The importance of social association in Burke’s politics demarcates what Collins identifies as “the limits of transactional exchange.” What Burke called “the real rights of men” were not merely negative freedoms. They were positive goods that only a stable social order grounded in shared morality could deliver. Thus, the importance of manners. Collins explains:

Human beings were not “poor and sordid barbarians,” but men and women of honor crafted in the divine image of God and endowed by Him with the faculty of reason. This is where Burke detaches himself from the thought of John Locke and other contractarian thinkers in the early modern period on the subject of political economy. Burke acknowledged the importance of property and commerce in civil society, but he believed that the essence of man transcended the demands of biological self-fulfillment, the calculus of pleasure and pain, and the fulfillment of transitory contracts. (p. 493)

Here and elsewhere in the book, Collins may overstate Burke’s affinities with Locke at the expense of his compatibility with Aristotle. Collins’s Burke, like Collins’s Locke, seems often to regard property as the end-all, be-all of civil society. For example, Collins writes: “Burke argues that the protection of private property was a principal reason for the formation of civil society in the first place—an insight not unlike Locke’s theory of civil society” (p. 423).

But Burke’s thought is more nuanced than that. In a passage Collins quotes (p. 422), Burke calls property “the very foundation of social union.” Put otherwise, property is the basis of higher social goods: a foundation, not an end. Burke’s clearest explication of these ends is the premise of his transgenerational social contract: Society is “a partnership in all science; a partnership in all art; a partnership in every virtue, and in all perfection” (p. 509). This is a fundamentally Aristotelian conception of politics.

Relatedly, Collins’s case for Burke as a natural-rights thinker rests on what may be a conflation of different senses of the word “nature.” “Burke sprinkles ‘natural’ and its cognates in his other writings and speeches related to the free movement of commerce that precede ‘Thoughts and Details,’” Collins writes (p. 50). Similarly, with regard to the Jacobin profligacy with paper assignats: “In employing the phrases ‘rational means’ and ‘natural good sense,’ Burke is associating the opposition of paper-money despotism with reason and nature, summoning tinctures of Enlightenment vocabulary to strengthen his argument in favor of commercial prosperity” (p. 445).

But as Collins uses them, these cognates have at least three different meanings: nature in the classical sense of the nature of things; nature as naturally occurring phenomena; and nature in the modern sense of rights that date to the state of nature. Burke’s famously elusive reflections on natural rights and natural law requires attention to these distinctions.

These, however, are quibbles. Even at that, they are testaments to the richness of the book, for which Burkeans are in Collins’s debt. Collins’s treatment of an undervalued aspect of Burkean thought will earn the prescriptive right to stand, for a long time, as the definitive study of the Anglo-Irish statesman’s political economy. Collins has done students of Burke and of political economy alike an immense service.