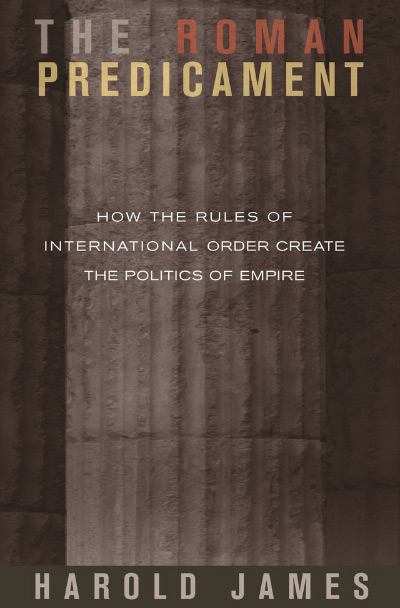 The Roman Predicament
How the Rules of International Order Create the Politics of Empire
By Harold James
Kindle Hardcover Paperback
This book review appeared in the Winter 2007/08 issue of The Independent Review.

The United States is the most powerful state in the world today. Our “hard” power and “soft” power are unequaled. Our reach is truly global. Given this historically rare situation, it is not surprising that we would look to the handful of previous world powers of comparable stature to help us understand the promise and peril of our unique stature. Princeton historian Harold James’s new book The Roman Predicament lays out an argument about how a decidedly nonimperial power such as the United States may be setting itself up to become the new Rome, with all that entails for us and the rest of the world.

James argues that our commitment to commercial liberalism—free trade and free markets—may not, despite our best intentions, lead to “a stable, prosperous, and integrated international society” (p.1). Rather, such efforts will cause a “vicious spiral” through which the liberal international order undermines itself by causing domestic conflict and international war. Domestic conflict comes from increasing demands here at home to tame the untrammeled actions of the free market. International conflict arises from states and other actors who fear globalization’s inequities and uncertainties. In a classic illustration of the old adage that the “road to hell is paved with good intentions,” James fears that the United States will respond to these threats to the liberal world order in a very illiberal, imperial fashion, as the Roman republic did two millennia ago.

The Roman Empire is more a literary foil than James’s real comparative case. Indeed, the rise and fall of another commercial empire—Great Britain—represent the heart of this cautionary tale. James commends to us two of eighteenth-century Britain’s most influential thinkers, Adam Smith and Edward Gibbon, who shared his concern that commercial great powers generate serious internal and external resistance to their efforts to maintain the liberal international order. This resistance produces greater domestic and international challenges to the liberal order, which in turn tempt great powers to behave in a self-defeating imperial fashion. Of course, in 1776 the key manifestation of this behavior was Britain’s increasingly onerous efforts to combat the restiveness of its North American colonies, which weighed heavily on both Smith’s and Gibbon’s minds.

James thinks that the only way to escape the “challenge and response model” (or the globalization and empire model) that brought down the Roman and British empires is to embrace a values-based system organized “within a shared natural law framework” (p. 148). What this means is not spelled out clearly in The Roman Predicament, but James hints that cooperation might result from the shared values of a common background (for example, the Abrahamic roots of the three great monotheistic religions) or from a shared commitment to certain precepts (that is, the role of reason in modern secular liberalism and Roman Catholicism) among otherwise very different views of the world. In both cases, James believes that shared values, rather than rules or power, constitute the most durable basis for international cooperation.

James argues that rather than try to maintain international order by brute force, the United States should count on the intellectual attractiveness of certain values to maintain this system. For him, the alternative to the U.S. imperial approach to maintaining international order is Europe, whose power, in his view, lies primarily in its values. These values include, among other things, the state’s willingness to tame the vagaries of the unconstrained free market, a different definition of security that seeks to prevent conflict and war, and finally an alternative to the omnipresent and suffocatingly uniform American culture that defines globalization. Europe is successful, in James estimation, not because it is militarily powerful or economically efficient, but because it is based on shared values that large parts of the world find attractive (as evidenced by all the countries that want to join the European Union).

What are we to make of James’s argument? I think his diagnosis is correct—that efforts to preserve the liberal order can lead to illiberal imperial policies—but he does not take into consideration how liberalism itself can encourage imperialism. Given that factor, adoption of Europe’s neo-Kantian project may not solve the imperial dilemma, but instead exacerbate it. Rather than building more international institutions of governance, we should rely on the “invisible hand” of the balance of power as the best means to preserve international order (not to mention our own domestic liberalism) without empire.

In recent years, a growing number of scholars have exposed the surprising links between liberalism and imperialism. Liberalism contains a powerful impulse to impose

itself on the rest of the world and rationalizes doing so by suggesting that virtue and self-interest can be reconciled in a certain type of imperialism. (A burgeoning literature on this topic includes Uday Singh Mehta, Liberalism and Empire: A Study in Nineteenth-Century British Liberal Thought [Chicago: University of Chicago Press, 1999], and Jennifer Pitts, A Turn to Empire: The Rise of Imperial Liberalism in Britain and France [Princeton, N.J.: Princeton University Press, 2005].) The virtuous side of liberal imperialism can be found in the idea of a “benign hegemony” that brings the benefits of progress to benighted regions of the world. The self-interested side is the premise that liberalism cannot survive in a nonliberal world.

The roots of liberal imperialism lie in the philosophy of Immanuel Kant, who held that states have an obligation to come out of the international state of nature by joining a Republican League. He was even willing to condone forcible measures to bring about such domestic changes. This Kantian imperative to remake the world is evident in the work of twentieth-century liberalism’s greatest exponent, John Rawls, who justifies the imperative to spread liberalism not only in pragmatic defensive terms, but also as a positive political obligation based on liberal tenets. Building explicitly on Kant, he posits that liberal states are in fact obliged “to leave the state of nature and to submit ourselves along with others to the rule of a reasonable and a just law” (“The Law of Peoples,” Critical Inquiry 20, no. 1 [autumn 1993], p. 61). Liberal societies may even employ military force to achieve this end. Rawls’s “law of peoples” thus epitomizes the paradox at the heart of post-Kantian liberalism: on the one hand, liberalism in principle is tolerant of nonliberal regimes, but, on the other hand, the only nonliberal regimes they can tolerate are those that are in fact liberal in critical respects, such as in the protection of individual human rights. Social theorist Jürgen Habermas succinctly summarizes the paradox of contemporary American liberalism as it wages the global war on terror: “no freedom for the enemies of freedom” (from an interview by Giovanna Borradori in Philosophy in a Time of Terror: Dialogues with Jürgen Habermas and Jacques Derrida [Chicago: University of Chicago Press, 2003], p. 41).

Given these surprising affinities between liberalism and international aggression, it is not surprising that many American liberals have had a hard time criticizing the Bush administration’s policies and therefore have done little to oppose them, considering that they embrace so many of the liberal premises that undergird them. As Tony Judt pithily puts it, “[T]oday, America’s liberal armchair warriors are the ‘useful idiots’” of the Bush administration’s illiberal foreign policy (“Bush’s Useful Idiots,” London Review of Books 28, no. 18 [September 21, 2006]).

Only a foreign policy based on realism, a decidedly nonliberal way of looking at the world, can provide a check on some of liberal America’s imperial excesses as it wages the global war on terrorism and do so without sacrificing our liberal domestic political order. Although a few nonrealists have made principled arguments about why the world would be better off without a U.S. Empire, the realists, arguing largely on pragmatic grounds, have most insistently urged restraint and caution (see Kenneth N. Waltz, “America as a Model for the World: A Foreign Policy Perspective,” PS: Political Science and Politics 24, no. 4 [December 1991]: 667–70; Benjamin Schwarz and Christopher Layne, “A New Grand Strategy,” Atlantic Monthly [January 2002]: 36–42.) The realists fear that as the United States grasps for the mantle of world domination, it will generate opposition around the world, resulting in greater international tension and conflict. Conversely, they are content to allow those same dynamics to ensure that no other state can establish its dominion. Realism, in sum, provides the United States with the basis for a consistent and sustained policy of engagement with the rest of the world based on the principle that Americans can pursue their national interests without having either to remake the rest of the world in their image or to retreat from the world completely.