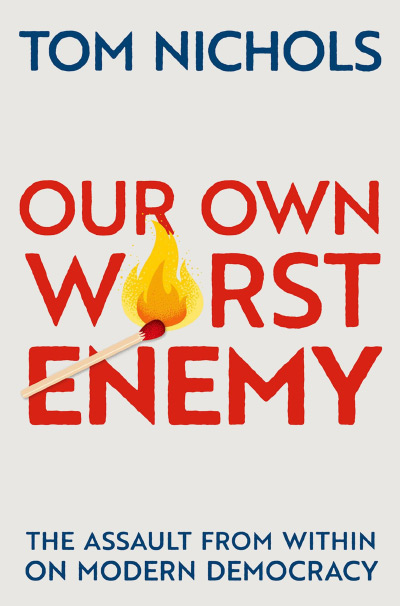 Our Own Worst Enemy
The Assault from Within on Modern Democracy
By Tom Nichols
Kindle Hardcover Paperback Audiobook Audio CD
This book review is a web exclusive for the Fall 2022 issue of The Independent Review.

There is a saying that goes something like this: When the people of a nation are starving, they have just one problem, but when the people of that nation become rich, they have a million problems. That is the basic premise of Tom Nichols’ most recent book, Our Own Worst Enemy: The Assault from Within on Modern Democracy. The prosperity enjoyed by those living in Western nations, he argues, has produced complacent and isolated individuals, as well as led to a decline in civic virtue among the people in their respective countries. In addition, social media has encouraged narcissistic behavior and further isolated people, enabling them to insulate themselves within echo chambers, thereby intensifying political polarization. The result has been an increase in “civic disengagement and illiberal behavior in the democracies.” We don’t just disagree with one another, we despise each other. We’re not just skeptical of people outside of our tribe, we don’t trust anyone. As a result, we’re slowly dismantling the institutions of our civil society and witnessing the rise of authoritarianism around the world.

Nichols compares contemporary liberal democracies to Montegrano, the fictitious name political scientist Edward Banfield gave to an actual Italian village he spent time observing in the 1950s (1958, The Moral Basis of a Backward Society, Glencoe, Ill: Free Press). The culture in Montegrano inhibited the people from coming together to promote their collective interests. Instead, elected officials and the people of Montegrano acted in ways that promoted only their own or familial interests, oftentimes at the expense of collective good. Failing to develop social capital and a sense of civic virtue required for cooperating beyond a small scale, the people of Montegrano remained mired in poverty. Today, liberal democracies are following the same pattern that Nichols argues could have similar results.

This civic sensibility, reinforced by time and repetition, allows us to overcome our individual flaws and construct a durable edifice of institutions, laws, and norms that protects our rights and freedoms. In the modern democracies, however, that edifice is now being washed away by the citizens themselves, as civic virtue drowns in narcissism, anger, and resentment. Bad citizenship is a passing malady, and it can be remedied by any number of means. But unvirtuous people are a fundamental and potentially fatal threat to a liberal democracy (p. 90).

Nichols says that the internet and the widespread use of social media largely contribute to the decline in the ideals of liberal democracy. There are certainly benefits of an interconnected world beyond the ease of online shopping and watching movies on demand from one’s living room. However, Nichols says, this interconnectedness fed into “envy and resentment” while encouraging “performative narcissism.” Twitter, YouTube, Facebook, and other social media sites certainly provide social benefits, such as facilitating the widespread mobilization of citizens to stand up to oppressive governments, but they also enable the spread of misinformation, have led to an increase in anxiety and depression, and empower mobs to stifle meaningful and legitimate discourse.

Not only are regular citizens using social media to air their grievances and pursue some semblance of elite status; politicians, too, have found it useful for influencing public opinion and amassing a large number of followers. On its face, this doesn’t appear problematic if the idea is that politicians have a new means of reaching their constituents. But recent research by Jeremy A. Frimer, et. al. (“Incivility is Rising among American Politicians on Twitter,” forthcoming in Social Psychological and Personality Science) shows that politicians using Twitter to attract more followers have discovered that negative and divisive commentary is the most effective means of doing so. The result has been a dramatic increase in the level of incivility among politicians on Twitter.

Moving beyond the incivilities that social media rewards and encourages, the author is more concerned about the democratization of information on the internet. Nichols, who also wrote The Death of Expertise: The Campaign Against Established Knowledge and Why It Matters (2017, New York: Oxford University Press), argues first that the vast amounts of information readily available to anyone with a device and an internet connection has led to information overload. People are inundated with information, often from dubious sources, and have little time to reflect on and process the information to assess its validity and reasonableness. Second, it has provided a forum for narcissistic and poorly informed individuals to disseminate disingenuous, even dangerous, information to a broad swath of people. This, he says, pits faux experts against real experts for providing relevant information.

Nichols offers three suggestions for turning back this wave of populism and anti-liberal democratic ideology. All three have limited appeal, and may not be regarded as best solutions, but Nichols considers them attainable.

The first is to strengthen political parties. Nichols argues that political parties have become “merely vessels or brands for political entrepreneurs and interest groups” (p. ?). Both major parties (and Libertarians as well) have been co-opted by extremists that are smaller in number, yet well-funded, who rather than promoting ideas that are inclusive to a larger segment of the population, have become ideological and exclusive.

The second recommendation is to increase military experience among larger parts of the population. The all-voluntary army, Nichols believes, has created a “privileged class of Spartans,” which presents a serious threat since it “elevates martial virtues over democratic values" (p. ?). He does not suggest reinstating the draft, but offers a suggestion that teenagers spend a month during the summer between their junior and senior years of high school as something like an internship learning about the military.

The third and last solution Nichols offers is constitutional reform. The U.S. has splintered into different groups based on geographic location, education level, rural and urban environment, etc., and this fracturing has led not to more compromise, but less. As noted above, social media has been instrumental in fomenting dissension between different groups that is reflected in these divides. After four years of Donald Trump intentionally dividing the nation for political gain, overcoming all of these differences seems insurmountable, he says. Possible solutions Nichols offers include changing the number of elected representatives and dividing the states into more states.

Nichols ends with this sobering assessment of his concern.

The end of democracy will come not with mobs burning the Capitol, or food riots, or juntas of national salvation, or demagogues leading the peasants to burn the castles of the rich. It will end, instead, with highly educated, technically proficient, otherwise decent men and women with families and children and mortgages and car payments who will decide that uninformed, spoiled, irascible voters simply can’t produce coherent demands other than “just get it for us,” and they will act accordingly (p. 214).