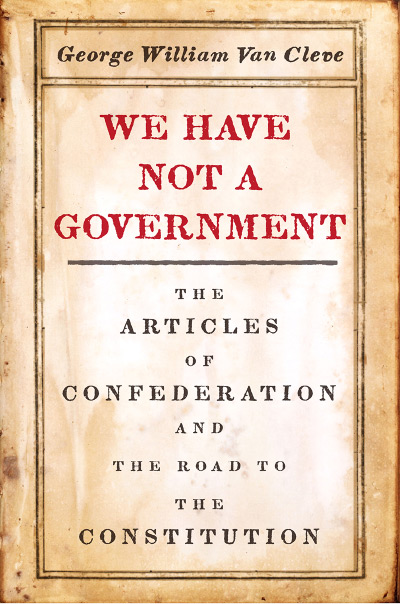 We Have Not a Government
The Articles of Confederation and the Road to the Constitution
George William Van Cleve
Kindle Hardcover Paperback
This book review appeared in the Fall 2019 issue of The Independent Review.

The end of the Revolutionary War brought the United States independence, but it also ushered in a series of trials and difficulties that the Confederation government struggled to address. Debt, an economic depression, belligerent European powers, restrictions on commerce, and sectional rivalries combined in making the mid-1780s perhaps the most challenging peacetime years in our country’s history. In We Have Not a Government, the Seattle University School of Law professor George William Van Cleve examines these turbulent years, celebrates the demise of the Articles of Confederation, and laments the confederal features that remain in our Constitution.

Van Cleve first turns to the issue of debt and taxation. Historians estimate that the war cost the Confederation and state governments £165 million or in today’s dollars $21.6 billion. America gained freedom but risked drowning in fiat money, bonds, and loans. The Confederation government had no independent power of taxation and depended on requisitions from the states. Van Cleve acknowledges that it was a financial burden for the states to comply with Congress’s requests for funds, but he ultimately concludes that it was really selfishness on the states’ part, not the economic depression that followed the devastating war, that led to low levels of compliance: “[T]he evidence suggests that although the depressed economy played a role, Americans’ strong desire to pay as little in taxes as possible” was the real problem (p. 77).

On multiple occasions, Congress asked the states to grant it the power to levy a tax on imported goods. It came close to success but was blocked by Rhode Island in one instance and byNew York in another. Unfortunately, the articles required unanimity for such an alteration. This unanimity requirement killed the impost and impaired other possible reform efforts that could have led to reformation, rather than rejection, of the confederal system.

State debt-relief policy also involved the issuance of paper money. Typically, the value of the paper emissions declined precipitously when compared to specie. The state legislation encouraged debtors to pay off creditors with the fiat money, which was quite detrimental to those holding justly acquired debts. Van Cleve describes how the turmoil over paper money caused many people to question “whether republican governments should have the power to modify or invalidate (i.e., ‘impair the obligation of’) existing contracts” (p. 200). The book’s seventh chapter provides an excellent background on why the Constitution of 1787 prohibited the states from making anything but gold and silver tender in payment of debts or from impairing contracts.

Sectional conflict has always existed in the United States, and Van Cleve describes how Spain’s closure of the Mississippi River caused tensions to rise and some to consider abandoning any union. Under the Treaty of Paris, the Mississippi was recognized as the western boundary of the United States. It was open for navigation by Americans, and many in the western part of the Confederation depended on the waterway for economic survival. Then Spain closed the river to American navigation and sent Congress scrambling to resolve the crisis. Secretary for Foreign Affairs John Jay negotiated with the Spanish diplomat Don Diego de Gardoqui and was willing to give up Americans’ navigation of the Mississippi River for a term of years if Spain would enter into a commercial treaty with the United States that would primarily benefit New England commercial interests. Giving up rights to the river was contrary to Jay’s instructions from Congress, but many northerners were willing to accept such a compromise. Congress debated altering Jay’s instructions, and the votes fell “along starkly sectional lines” (p. 173). Many leaders in both the North and the South began to assert that dividing the United States into separate confederacies was a palatable and necessary result of sectional differences. The controversy over the Mississippi, which sparked distrust across the country, also “markedly increased opposition to strengthening the existing Confederation” (p. 185).

The book also contains extensive discussions of other significant events in the 1780s, such as Shays’ Rebellion, Congress’s inability to retaliate against British commercial restrictions, and rising tensions with Indian tribes as settlers poured into western territories. The principle purpose of these chronicles is not so much to elucidate important historical events but to make the case that a strong central government was necessary in the 1780s and remains essential today.

Tellingly, Van Cleve introduces the book as “a history of the final years of the Confederation . . . from 1783 until its collapse in mid-1787” (p. 1). Why not a full history of the Confederation? Because a full history would require Van Cleve to acknowledge the successes of the Confederation. The two main goals of the Confederation were the defeat of Great Britain and the preservation of self-government in the thirteen states. Both were achieved in a confederative structure. In 1783, the Treaty of Paris officially ended the American Revolutionary War. King George III acknowledged that the thirteen former colonies were “free sovereign and independent states.” Americans no longer took instructions from a legislature thousands of miles away; they instead would enact their own laws in their own assemblies.

In the book’s concluding pages, Van Cleve rails against the “stalemate government” of the Confederation and compares it to modern American politics. Just as the “selfish” states were the villains in the 1780s, so they are today. Van Cleve sees the U.S. Senate and equal state voting as an evil that needs to be cured. It never occurs to him that “stalemate government” is not such a bad situation inasmuch as it foils politicians’ plans to meddle in the people’s lives. Indeed, bicameralism, the executive’s veto power, and judicial review are examples of structural features of the Constitution designed to make lawmaking more difficult.

Nor does Van Cleve recognize the value in states serving as laboratories of democracy where experimentation is encouraged. Such independence in the states would, for him, be an obstacle to a “continental empire” (p. 296) and to his preference for national one-size-fits-all remedies dictated from Washington, D.C.

In a final potshot at the Confederation, Van Cleve argues that but for the energetic national government created by the Constitution, government-sanctioned slavery would never have been eradicated. He never considers that had the states divided into two or more confederacies, there would have been no national fugitive-slave law. The bondsmen in slave states bordering one or more nonslaveholding confederacies would have escaped in such large numbers that slavery would have been impracticable in those states. Abolitionist William Lloyd Garrison realized this dynamic and consequently urged the North to secede from the Union to bring about the death of the peculiar institution.

To borrow a term from seventeenth-century English political discourse, we can characterize Van Cleve as a “Court” historian lending his pen to a skewed vision that inevitably leads to an increase in the size and power of government. The muchmaligned Confederation certainly struggled in the aftermath of war, but so would any government dealt the same hand. Confederal reform was essential, but creation of a constitution that permitted the rise of our current puissant national government was not the only option. As shown in my book Crossroads for Liberty: Recovering the Anti-Federalist Values of America’s First Constitution [Oakland, Calif.: Independent Institute, 2016], 203–8), alternatives were available that would have preserved the decentralized structure of the Articles of Confederation and met the needs of union. Unfortunately, modest proposals did not resonate with the Federalists of the late 1780s, nor do they capture the imaginations of their intellectual progeny.