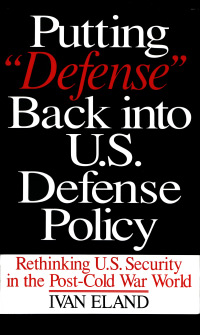 In January 2002, the Bush administration presented a defense budget to the Congress that called for spending approximately $400 billion on defense in the fiscal year beginning October 1, 2002. This means that, since coming into office, the Bush administration has increased the baseline budget by nearly $100 billion, or 30 percent (the war against al Qaeda and the Taliban was funded separately through a supplemental appropriation); that the United States now spends more on defense than the eighteen next-ranking nations in the world combined; that the United States is now spending 15 percent more in real terms than it spent on average during the Cold War; and that President Bush increased the defense budget more in his first year in office than he promised in his campaign to increase it over a decade.

If anything, the defense budget will continue to climb even more rapidly over the next five years. The Democrats, afraid of being branded as soft on defense in light of the events of September 11, 2001, passed the president’s budget essentially in toto. The Joint Chiefs of Staff pointed out that even with this 30 percent increase, the Bush budget is still $30 billion less than what is needed to fund fully all of the programs the president proposes. Thus, there will probably not be the debate that should accompany such a dramatic shift in the strategic landscape.

Those looking for an alternative view should pick up Ivan Eland’s new book Putting “Defense” Back into U.S. Defense Policy: Rethinking U.S. Security in the Post–Cold War World.

Eland, the director of defense policy studies at the Cato Institute, argues that even before the Bush binge, the United States was spending too much on defense and that the money is being spent on the wrong priorities. He proposes that rather than increasing the budget by 30 percent, the government should cut it by 40 percent, to $184 billion.

According to Eland, if the United States changes its defense strategy, this reduction can be made without undermining the U.S. position as the dominant superpower. He wants the United States to stop intervening haphazardly in foreign civil wars, such as those in Kosovo and Somalia, to reduce its overseas presence drastically, and to intervene militarily only where the country’s vital interests are at stake. Eland calls this strategy appropriate to a“balancer of last resort”; that is, the United States should assist friendly nations in key areas of the world only where the regional balance of power deteriorates because of severe hegemonic aggression.

Adopting the new strategy will permit the United States to reclaim the Founding Fathers’ position that having a small military and avoiding foreign conflicts best preserves the Constitution and the liberties and prosperity of the American people. In addition, the smaller defense budget will allow the country to avoid the fate of other great empires, such as Great Britain and the Soviet Union, which collapsed because of excessive defense spending.

One can find much to criticize in Eland’s proposals. For example, his definition of U.S. vital interests does not include the Korean Peninsula or the Persian Gulf. Nor does he deal with asymmetric threats. However, his overall message is one that deserves a hearing before the United States embarks on a defense-spending binge.