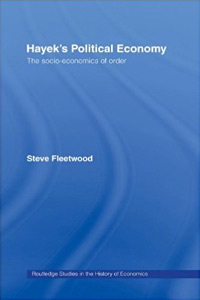 Those who thought that Friedrich A. von Hayek’s work has been so well researched that little new can be said about it will get a pleasant surprise, as well as considerable intellectual enlightenment, from reading Hayek’s Political Economy. By concentrating on a narrow aspect, Steve Fleetwood manages to say some quite original things about economics and social philosophy and, most important, something new in our understanding of the genealogy of Hayek’s ideas. The book, it should be noted, deals only with the purely philosophical aspects of Hayek’s economics; the reader will find little here about Hayek the defender of liberty, the opponent of “social justice,” the spokesman for the common law, or even the later exponent of evolutionism.

Although it might be true to say that Hayek’s abiding concern in social science was to demonstrate that in the social world there is order without design—that a kind of predictability and regularity is possible in human affairs without the need of a Leviathan state or the invocation of mystical forces beyond the realm of science—what is remarkable is the variety of explanations he used for such a phenomenon. Fleetwood charts a kind of Hayekian intellectual odyssey by which this conclusion was reached: first, by more or less orthodox positivism, then by a kind of subjective idealism (or hermeneutic foundationalism), and finally by the use of a quasi-transformational realism (the reader will have to get used to the author’s use of complex, but by no means dispensable, jargon). Thus there is a Hayek I, which covers Hayek’s period as a technical economist from the late 1920s until about 1937 and the publication of Hayek’s important paper “Economics and Knowledge” (which Fleetwood strangely dates as 1936); from then on (Hayek II), he became concerned with demonstrating the methodological differences between natural and social science and the apparently irredeemably subjective nature of the latter until about 1960; and onward (Hayek III), when he began to develop a new social theory based on the idea of man as a rule-following animal, a theory that provides the final building block in his explanation of order.

Although in his early years as a monetary and trade-cycle theorist Hayek (and other “Austrians”) departed from orthodoxy in technical economics, he was still a positivist in the sense of believing in “laws” (constant conjunctions) of a Humean type that the economist could discover. Most notable of these regularities was the existence of (or tendency toward) equilibrium, which was normally disrupted only by misguided monetary intervention by government. His subsequent dissatisfaction with this idea is now well known. From 1937 onward his concern with the subjective nature of economic knowledge led him to reject more formally the search for a Walrasian-type perfect harmony of economic actions.

From then on Hayek stressed the differences between natural and social science. Subjectivism means that social reality consists of the thoughts and conceptualizations people have about the world; there is no objective reality out there waiting to be discovered by the observer, nor any possibility of precise predictions that could be subjected to empirical tests. There is only a complexity of events that the observer can understand (verstehen). This situation does not preclude the possibility of some quasi-scientific “laws,” because people of similar minds will have similar conceptualizations of phenomena (how else could inflation, the Ricardian law of rent, and other economic propositions be explained?), but these “laws” have virtually zero empirical content. Thus, the whole subjectivist approach leads to dead ends. For if social reality does not (ontologically) exist apart from minds, there is no way to satisfactorily explain order. There is certainly no method by which even a tendency toward equilibrium (which Hayek never fully believed in anyway) could be demonstrated, as there is no explanation of how the dispersed knowledge (which had been the concern of Hayek since at least 1937) in an economy can be coordinated.

Only when Hayek hit upon the theory of dispersed and tacit knowledge and showed how it can be coordinated could he develop a full-fledged scientific theory of order. Fleetwood describes extremely well the argument that it is not just the “telecom” system, or price mechanism, that produces coordination but the whole network of rules and practices that enterprising agents exploit in their economizing. We need to understand the “discovery, communication and storage of knowledge.” This understanding requires an analysis of the “deep structures” of society, those partially hidden practices that are neither revealed by the brute empiricism of positive economics nor made available to the subjectivist idealist (whose knowledge of social reality is limited to the conceptualizations abstract individuals make of it).

Crucial here is “tacit” knowledge—knowing how to do things rather than merely being aware of objective facts. Entrepreneurs have not merely special or local knowledge of some price differential (that could perhaps be stored in a computer, as the early market socialists claimed) but also a capacity to act in an enterprising way and to accommodate their behavior to local customs, morals, and practices. They know how to go about the activity of entrepreneurship. That “know-how” is incommunicable in a direct way, but it is essential if coordination—tentatively defined as the nonradical divergence of expectations—is to be achieved. Thus for Hayek, Homo economicus is to be rejected not (thankfully) because he fails to live up to our highest moral expectations but because the immense computational facilities required for coordination and, more important, the tacit knowledge of how to do things are not encompassed by that concept. It might have some use as a theoretical fiction, but it is inadequate to explain economic order. It cannot possibly explain how agents “recreate, reproduce and transform social structures.”

Fleetwood brings out the novel features of Hayek’s work in an instructive comparison with the work of Israel Kirzner. Some of us used to make the ironic comment that Kirzner, with his attempted demonstration of the inexorable tendency of markets to equilibrate (albeit temporarily and imperfectly) through successive acts of entrepreneurship by alert individuals, was really Frank Hahn (the Cambridge, U.K., theorist of dynamic equilibrium) without the math. Fleetwood confirms this perhaps unfair description by arguing that Kirzner is really writing about the telecom system, which is powered by repeated acts of arbitrage, and not about the Hayekian world of truly decentralized agents somehow getting along by following rules and practices they can barely state.

Still, in defense of Kirzner it should be stressed that coordination does require his kind of responsiveness to gaps in the market, and an awareness of unexploited opportunities for profit, just as much as it needs the preservation and transformation of customary rules and practices. Indeed, sometimes the latter might impede entrepreneurship; the innovator might well have to overturn prevailing practices, not merely transform them. Hayek himself seems aware of this possibility in his The Fatal Conceit, where he shows how the transition from the tribal society to the extended order comes about through the breaking up of conventional and comforting (but “inefficient”) practices. The more general point is that there can be tacit ignorance in society (and not just in primitive orders) that is communicated and stored within its deep structures. Evolution may eliminate such inefficiency (this, in fact, was Hayek’s final position), but Fleetwood does not examine this issue.

My major criticism of Fleetwood’s excellent book is that although he successfully records the routes by which Hayek reached his final demonstration of socioeconomic order, he does not inquire into whether Hayek has given us a satisfactory answer. Some writers adopt similar philosophical premises about the dispersed and tacit nature of knowledge but have less confidence in the likelihood of satisfactory coordination. I have in mind the radical subjectivists, Ludwig Lachmann and G. L. S. Shackle, who doubt the existence of even the harmonizing potentiality that Hayek sees in free economies, let alone the possibility of equilibrium. Fleetwood refers to Lachmann’s emphasis on “divergent expectations” (that could lead to a spontaneous breakdown of the catallaxy) but does not take up the full implications of this hypothesis. Of course, even if spontaneous discoordination can occur, it does not follow that state action could ameliorate it, and indeed much of Austrian economics deals with the disruptive effects of government intervention. Hayek merely says that the market coordinates “better than any known alternative,” rather than asserting a tendency to equilibrium; the latter claim is the clear implication of the work of people such as Kirzner. But put this way the arguments for the market look more modest than most people have come to expect.

Although I would like to have seen a thorough inquiry into this problem, my admiration for the book remains undiminished. Uninitiated readers may find the philosophy a little difficult, and some familiar topics are, regretably, unexplored. It might not be the case historically that Hayek’s work falls into Fleetwood’s neat periods (and the author does admit to some obvious overlapping), but the logical structure of the argument is impeccable. Hayek’s Political Economy is a profound and sophisticated contribution to Hayekian scholarship.