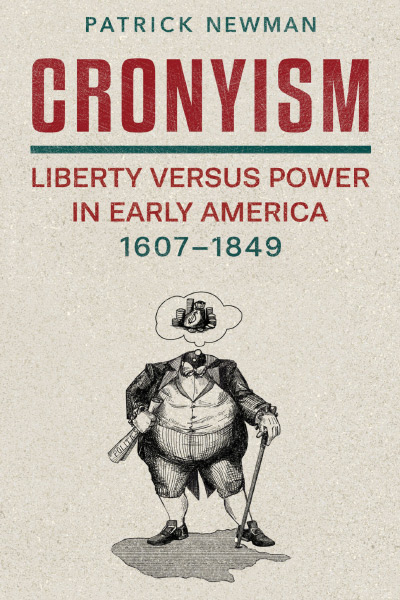 Cronyism
Liberty vs. Power in America, 1607–1849
By Patrick Newman
Kindle Hardcover Paperback Audiobook
This book review is a web exclusive for the Spring 2022 issue of The Independent Review.

Rothbardian economist Patrick Newman employs the term cronyism broadly, as in “crony capitalism,” rendering this book about rent-seeking/extraction and “special interest legislation” (p. 15) rather than about classic cronyism, or the granting of political appointments to friends without regard to their qualifications.

The book does not delve into primary sources to assess claims of special dealing, as Burton Folsom did in Myth of the Robber Barons: A New Look at the Rise of Big Business in America (New York: Young America’s Foundation, 2018). Newman instead paints projects as crony endeavors on innuendo, like the participation of one or more disliked “elites” (p. 100). He claims, for example, that a federal excise tax on whiskey was “a clear instance of cronyism” (p. 108) because the law charged smaller stills a higher rate per gallon. That excise, however, was enacted to ensure that the relatively high tariff that foreign liquors could bear would not inadvertently subsidize domestic producers, large or small. Moreover, fixed collection costs meant that smaller stills had to pay a higher rate per gallon lest they be subsidized by collector indifference.

Despite the somewhat deceptive main title, the book delivers the sweeping survey implied by its subtitle in sixteen chronological chapters, divided into five roughly equal parts: The Road to Empire, 1607–1790; The Hamiltonian Era, 1790–1801; The Failed Jeffersonian Revolution, 1801–1817; The Era of Corruption, 1817–1829; The Failed Jacksonian Revolution, 1829–1849. The titles of those parts reveal the overall thesis, i.e., that some political actors/parties came to power in shooting or electoral “revolutions” by combating special interest legislation, but all eventually succumbed to “cronyism,” became corrupted, and were ousted in turn.

Newman’s summary is generally able and often pithy but unlikely to convince readers outside of the classical liberal historical tradition (as described in Michael J. Douma and Philip W. Magness, eds., What Is Classical Liberal History? New York: Lexington Books, 2018) that it offers a deeper understanding of American political history than any of the major competing narratives, like that of Daron Acemoglu and James Robinson in The Narrow Corridor: States, Societies and the Fate of Liberty (New York: Penguin, 2019). That is because it merely reinterprets a set of well-trodden facts rather than revealing new sources or data.

Moreover, Newman narrates a morality play between good (liberty or free markets) and evil (power or cronyism), with little nuance. He frequently employs words like un/fortunately to praise or blame historical actors or their actions while downplaying the rent extraction that took place at the state and local levels. That allows him to portray the national government as bad (crony power) and the states as good (liberty loving) when, in fact, rent extraction occurred at all levels. He blames the Yazoo mess on the U.S. Supreme Court, for example, rather than on the corrupt Georgia state legislators who accepted the bribes and sold the land for a pittance in the first place.

Newman often resorts to labels, some anachronistic. Calling the Founders “reactionaries” who fomented a “coup” does not really add to scholarly understanding of what they did, or why (pp. 43–47), especially given that all wanted limited government. Newman describes some policymakers as “libertarian” more than a century before that term became common to describe a particular flavor of classical liberal thought and others as “statist” in an era when nobody believed government revenues should exceed even five percent of output in peacetime.

Anachronistic interpretations also abound. Although the Antifederalist critique of the Constitution has largely read true since the New Deal, it proved far too pessimistic for over a century after the founding. To paint Antifederalists as saints while castigating Federalists as the cause of the nation’s ills today misses the point that America, and Americans, long thrived in liberty under the Constitution. Distortions of that document after the Civil War proved liberty’s undoing, not the policies set forth by James Madison and other Founders.

Newman’s treatment of Alexander Hamilton, for example, mirrors that of many libertarians more steeped in abstract theory than historical evidence and reasoning. Hamilton was not a monarchical monster hellbent on re-creating a British-like empire in North America and his policies were much more sophisticated than the caricature depicted in Cronyism or in the recent eponymous hit musical (See Robert E. Wright, “The Musical Hamilton from the Perspective of Financial History, in Verse,” The Independent Review 21[Spring 2017]: 535–44).

As shown by Richard Salsman in The Political Economy of Public Debt: Three Centuries of Theory and Evidence (New York: Edward Elgar, 2017) and me in One Nation Under Debt: Alexander Hamilton, Thomas Jefferson, and the History of What We Owe (New York: McGraw Hill, 2008), Hamilton was a debt realist, not an advocate of a “near permanent” (p. 84) public debt. John Nelson established in Liberty and Property: Political Economy and Policymaking in the New Nation, 1789–1812 (Baltimore: Johns Hopkins University Press, 1987) that Hamilton’s tariffs were designed to maximize revenue, not to protect elite manufacturers as claimed by Newman. In books and articles too numerous to cite, Richard E. Sylla has shown that Hamilton’s overriding policy goal was to establish public credit, not to enrich any specific individual, group, or class. With the right institutions and incentives in place, Hamilton believed, all could improve their lot.

Moreover, Harvey Flaumenhaft shows in The Effective Republic: Administration and Constitution in the Thought of Alexander Hamilton (Durham, N.C.: Duke University Press, 1992) that Hamilton sought not an all-powerful central government but an energetic one capable of fulfilling its core mission of protecting Americans from foes foreign and domestic, including itself. Similarly, Robert J. Reinstein (“Aggregate and Implied Powers of the United States,” American University Law Review 69 [2019], 75) shows that while Hamilton wanted to preserve “large areas of residual [government] autonomy,” the first Treasury Secretary believed that the national government’s sphere was limited to external and interstate peace and trade. He would not have been a New Dealer or a Green (see, for example, my review of Christian Parenti’s Radical Hamilton: Economic Lessons from a Misunderstood Founder in the Journal of Interdisciplinary History 52 [Summer 2021]: 130–32).

The Bank of the United States (BUS, 1791–1811) was constitutional because it was the best means available for regulating the money supply and money, in Hamilton’s words, “is the very hinge on which commerce turns” (as quoted in Reinstein, p. 81). That does not mean, however, that the national government has the Constitutional authority to force citizens to take a vaccine or to invest in a retirement annuity program administered by said government. Properly understood, the constitutionality of the Bank of the United States, or the Louisiana Purchase for that matter, does not imply HUD or the Department of Education or any of the myriad other national government agencies and projects that have been concocted since the Depression. That is because they fall outside the scope of the Preamble and the four great aggregate national powers Reinstein, following Hamilton, describes (pp. 79–80).

Bent on portraying the BUS as a “monopoly” and a generator of inflation that made too ample loans to its competitors, Newman labels Hamilton, the policymaker responsible for defining the U.S. dollar in terms of gold and silver and the one most adamantly in favor of low interest rates and convertible bank money, a “soft money” man (pp. 93–95)! Such inexcusable conclusions tend to appear when scholars seek to blame rather than first describe, then analyze, then, hopefully, explain.

Moral judgements remain unconvincing when relevant context is presented in an inadequate or incomplete manner or when the judgements are based on values held today but not in the past. While scholars today should be free to condemn slavery, cronyism, rent extraction, and such, they need do much more than that if their scholarship is to improve policy or prove lasting.