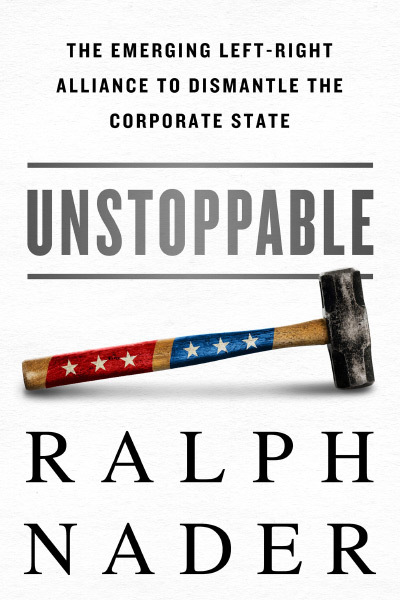 More than a century ago Charles Dudley Warner cogently observed that “[p]olitics makes strange bedfellows.” Ralph Nader’s new book, Unstoppable: The Emerging Left–Right Alliance to Dismantle the Corporate State, inspired by the current state of political dysfunction, advances the idea that the Left and the Right on the political spectrum actually have—in many instances—very similar, if not identical goals. So by becoming “bedfellows,” the Left and the Right together can make desired changes in the policy arena that benefit both. In the past, he argues, political labels and stereotypes have hindered cooperation among groups with different approaches and philosophies. “Convergence,” which he defines as “voluntary alliances for the common good by positive-spirited persons of the Right and of the Left” (p. x), can achieve critically needed changes in public policy.Working alliances of liberals and conservatives (LibCons) can make a major difference in many instances. Evidence of the efficacy of convergence is based on prior successes of left–right convergence.

Why is the LibCon convergence so essential? Nader identifies the corporatist state as the villain. Money is the lifeblood of politics; corporations spend vast sums on self-serving lobbying to influence politicians and legislation at all levels of government. The corporatist agenda is pursued at public expense. The mainstreammedia, dependent on the bureaucracy for news content, is in a symbiotic relationship with government and therefore is more a lapdog than an effective watchdog against government waste, inefficiency, and undesirable practices. The media seem reluctant to publicize complicated, detailed public-policy matters and opt for sensationalist, entertaining soundbites rather than serious analysis of pressing political problems.

Although politicians may espouse the need for dramatic changes in policy to get elected, once in office all elected officials face the same incentives: going along to get along and raising funds for the next electoral contest—primarily from the deep pockets of corporate America. Compounding the problems, says Nader, are political appointees who were corporate executives and who are reluctant to engage in serious conflict with the economic sector, to which they plan to return after leaving office. The electorate has become disillusioned with politics, but Nader claims the LibCon alliance can counter or greatly reduce the corporatist state’s immense and growing power.

Nader’s goal is to obtain LibCon cooperation, which in the past has been successful from time to time but evanescent. Conservative think tanks and organizations may be less than enthusiastic participants in LibCon activities if they are dependent on corporations and their foundations for financial support. Leftist groups are similarly also influenced by their financial contributors—for example, unions, which expect their advocacy organizations to be vocal in their demands and protective of their established narratives. LibCon alliances can produce outcomes beneficial to both sides, but only if traditional allegiances are realigned so that broader objectives can be achieved.

Broadly speaking, Nader insists that transparency in government actions and accountability are LibCons’ basic objectives and points out that the Obama administration, despite campaign promises, has failed to deliver either. In chapter 4, he lists and explores briefly some two dozen “proposed redirections and reforms” (p. 65) for convergent action. Most of these reforms would be heartily endorsed by everyone who is not a bureaucrat, a politician, a lobbyist, or a political hanger-on. Who, for example, would oppose auditing of the Defense Department budget annually; promoting efficiency in government contracting and spending; pushing community selfreliance; defending and extending civil liberties; getting tough on corporate crime; ending corporate welfare; expanding direct democracy via initiative, referendum, and recall; or opening up the electoral process by eliminating obstacles to the participation of independent candidates and third parties?

Some of Nader’s proposals are more problematic, however. For example, he “opposes the patenting of life forms, including human genes” (p. 105), but this prohibition could discouragemedical research. “Protecting children from commercialism and its physical and mental exploitation and harm” (p. 66) would, to many, be a parental responsibility rather than the concern of some regulatory bureaucracy. Although action by private entities may produce market outcomes that are less than desirable, history has repeatedly shown that there is absolutely no guarantee that government can produce superior results. Evidence of bureaucratic failures are abundant. Libertarians will applaud Nader’s call to end “the ineffective war on drugs” and “unconstitutional wars” (p. 66), but convincing “conservatives” with more moderate views (translation: garden-variety Republicans) to support such stances will likely be difficult.

Even moderate conservatives will question a few of Nader’s goals. He favors automatic, cost-of-living increases in the minimum wage and asserts that research showing the damaging effects of such increases long cited by economists has largely been discredited. But most economists—conservative and otherwise—are still convinced that minimum-wage increases disproportionately and negatively affect entrylevel workers. Moreover, he seems to question moves toward freer trade. But even the Clinton administration, hardly a bastion of right-wing ideas, pushed for the passage of the North American Free Trade Agreement. In instances where Nader senses conservative resistance might surface, he selectively and briefly quotes the paragons of freemarket thought—Adam Smith, Milton Friedman, Friedrich Hayek, Ludwig von Mises, and Russell Kirk—to buttress his arguments.

As always, in sweeping proposals such as those set out in Unstoppable, the devil is in the details. Nader wants LibCons to “reform health care” and to “push for environmentalism” (p. 66), but a consensus on how such broad and complex objectives should be achieved and what is involved is very difficult if not impossible. Other than misanthropes, no one favors unemployment, homelessness, hunger, pollution, or various other social ills, but the salient issue is how these problems can best be solved.

The concept of convergence has an innate appeal—What else can be done to change “politics as usual”?—and Nader should be applauded for looking beyond labels and stereotypes to address serious economic and social problems from a different perspective. His agenda is thought provoking, even if not totally persuasive, and deserves serious consideration and discussion by anyone who finds the current political dynamic disturbing. A dialogue based on the ideas in Unstoppable is urgently needed and long overdue. Nader concludes his work with a letter addressed to billionaires that seeks funding to build alliances and energize the new coalitions. Let’s hope that the billionaires’ wealth wasn’t acquired through the machinations of the corporatist state!

Finally, LibCons may well succeed in changing at least some of the perverse aspects of public policy. Indeed, even individuals can make a difference. Cons should remember that Senator Ted Kennedy was the prime mover in Congress’s deregulation of the airlines in the 1970s, which then resulted in the deregulation of most of the transportation industry. Now we learn that Ralph Nader has a libertarian streak. Who knew?