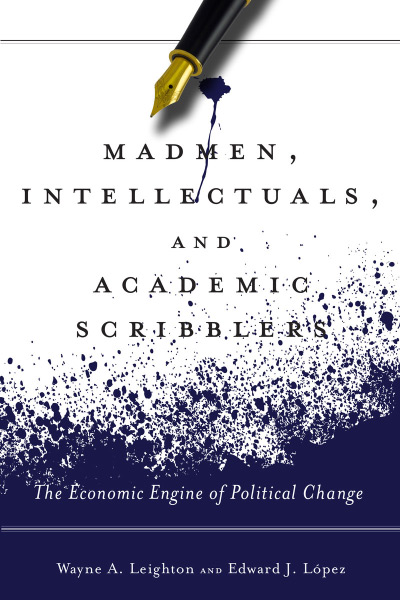 Madmen, Intellectuals, and Academic Scribblers
The Economic Engine of Political Change
Wayne A. Leighton and Edward López
Kindle Hardcover Paperback
This book review appeared in the Summer 2014 issue of The Independent Review.

Madmen, Intellectuals, and Academic Scribblers is a fascinating account of the development of ideas and the influence of these ideas on policies. It is very well written, uses good examples to make the exposition clear, and has a down-to-earth style that makes the book a joy to read.

A well-functioning government should adopt policies that make the populace better off and should not approve bad policies. However, many observers have concluded that governments only infrequently make the right decision. For example, William Davis and Bob Figgins asked economists if they agreed that “the typical bill passed by the U.S. Congress and signed into law generates a positive net social benefit for society.” On a scale of 1 (strongly disagree) to 5 (strongly agree), the economists’ average response was only 2.56 (“Do Economists Believe American Democracy Is Working?” Econ Journal Watch 6, no. 2 [2009]: 195–202). It’s not just that ideas that would benefit society are rarely adopted—the status quo appears to be a powerful force, so policies that have been shown to harm society often persist. Nevertheless, some good policies are adopted, and some bad policies are stricken from the books. What factors determine which policies are adopted or stricken? Given the difficulty of changing policies, do ideas matter? The authors argue that ideas—especially those of economists—really do matter sometimes.

Wayne Leighton (Universidad Francisco Marroquín) and Edward J. López (BB&T Distinguished Professor of Capitalism at Western Carolina University) frame their analysis by posing and analyzing three big questions that are crucial to understanding political change. Here are those questions, which are repeated at various points in the book, along with some telling examples:

Question 1. Why do democracies generate policies that are wasteful and unjust?

Example 1a. None of the seventy-nine petitions from 1950 to 1974 to allow an airline to serve a market and thus to make the market more competitive was accepted by the Civil Aeronautics Board (CAB). Interstate (regulated) air travel was twice as expensive as intrastate (unregulated) air travel.

Example 1b. Mancur Olson in The Logic of Collective Action (Cambridge, Mass.: Harvard University Press, 1965) concludes that industries with few existing firms, uniformity of interests, and the ability to reward contributing members are more likely to organize successfully for political gain, which makes the industry better off and leaves the product’s consumers worse off.

Example 1c. Many of the distortions caused by government occur in the struggle between consumers and firms. The firms would like to limit entry into their industry, driving up prices and profits, making consumers worse off and firms better off. In Sam Peltzman’s model (“Toward a More General Theory of Regulation,” Journal of Law and Economics 19, no. 2 [1976]: 211–40), a legislator’s number of votes is maximized where the gain in industry votes from raising the product’s price equals the loss of consumer votes. The model predicts that the product price will be higher (i.e., further from the competitive price) for goods that represent a small share of the consumers’ budget. As predicted, Leighton and López report that the annual cost of the sugar tariff per consumer is less than $7 and that accordingly it does not pay for the typical consumer to lobby for lower sugar prices (p. 95). However, it does pay for firms in the sugar industry to spend millions contributing to the campaigns of members of Congress.

Example 1d. The political process weighs only the benefits and costs of those who vote or contribute to the legislators’ war chests. Sugar farmers in the Caribbean are given no weight by legislators and bureaucrats in the United States even though their well-being should be included in a welfare analysis of sugar tariffs. The list of inefficient regulations could be extended ad nauseam, but there are also instances in which the industry is unable to overcome the free-rider problem or for which the benefits from obtaining government regulation are not sufficiently concentrated to make it worthwhile to obtain regulation. The absence of regulation often signals a more efficient government.

Question 2. Why do failed policies persist over long time periods, even when they are known to be socially wasteful and even when better alternatives exist?

Example 2.Those who benefit from a policy often have invested money to be protected by the regulation. Owners of taxicab medallions have the exclusive right to drive a cab and would lose a considerable amount of money if a medallion were no longer required. Homeowners would similarly suffer capital losses on their homes if the mortgage deduction was eliminated. Thus, the specter of a capital loss lessens the likelihood that a bad policy will be repealed.

Question 3. Why do some wasteful policies get repealed (for example, airline rate and route regulation), while others endure (sugar subsidies and tariffs)?

Example 3. A rise in a good’s share in the consumer’s budget makes it more expensive for the consumer for a given increase in price. Peltzman’s model predicts that a higher share in the consumer’s budget leads to a price that is closer to the competitive price and may result in deregulation. Between 1950 and 1970, air passenger-miles per capita rose 1,142 percent, and truck ton-miles per capita increased 77 percent. After the sharp rise in the share of the budget devoted to these two products, commercial air traffic and interstate trucking were deregulated in the late 1970s.

After reviewing the “rules of politics” and previewing their argument, Leighton and López turn to the history of ideas. Chapter 2 summarizes thought over the centuries on the features of good government. They efficiently summarize political thought from the days of Plato and Aristotle in ancient Greece to the Middle Ages to the period of the American Progressive movement before they describe the massive changes in political rules that took place in the United States from the 1880s to the 1930s due to the Progressive movement. Laws affecting the labor market (enacting a minimum wage, compensating workers for lost earnings due to unemployment, prohibiting child labor, and favoring unions), establishing the secret-ballot and voter initiatives, and dealing with antitrust activity and environmental protection were major components of the Progressive agenda. More discussion of the conditions that led to the success of the progressive agenda would have been interesting in this book, especially given the complaints that good policies are rarely adopted and bad policies are rarely dropped. Modern economists arrive on the scene in chapter 3, which nicely places the work of Arrow, Buchanan, Coase, Debreu, Hayek, Jevons, Keynes, Marshall, Menger, Pareto, Pigou, Samuelson, Smith, Stubblebine, Tollison, Walras, and Wicksell in perspective.

Chapter 5, “How Ideas Matter for Political Change,” begins with several quotes that illustrate the importance of ideas in the formation of policies:

In 1975 an emergent leader of England’s struggling Conservative Party, Margaret Thatcher, famously slammed a book on the table in front of her colleagues. “This is what we believe,” she declared. The book was Friedrich Hayek’s The Constitution of Liberty (1960), which helped shape many of the policies that Ms. Thatcher would later pursue as prime minister. Years later, the prime minister of Estonia, Mart Laar, reflected, “I had read only one book on economics, Milton [and Rose] Friedman’s Free to Choose. I simply introduced it in Estonia,” and the economy subsequently flourished. (p. 109)

A deeper discussion of the within-discipline factors that play a role in political change follows, and the chapter then turns to an exploration of the effects of history, technology, biology, culture, geography, psychology, and collective beliefs.

Let me provide some flavor with two of the four fascinating cases describing the evolution of policy given in chapter 6. In 1959, future Nobel laureate Ronald Coase proposed auctioning radio frequency spectrum licenses (Coase credits a law school student, Leo Herzel, with proposing auctions in a law review article in 1951). This was a very delicate issue, with a great deal at stake. The RAND Corporation commissioned Coase and two RAND economists (William Meckling and Jora Minasian) to study this issue. The study was produced in 1969 but not released until 1995. Auctioning was approved in 1995, thirty-six years after Coase’s first article on the subject. The first ninety-nine licenses were auctioned that year for $7.5 billion. Leighton and López chronicle Coase and his colleagues’ perseverance as they moved along the remarkably slow path to acceptance of auctioning the radio frequency spectrum.

The deregulation of the air-travel market is the next case study of deregulation found in chapter 6. There was remarkably strong evidence that the regulation of air travel, initially by the CAB and later by the Federal Aviation Administration, was highly inefficient. The CAB between 1950 and 1974 approved none of the applications to enter the domestic market. A within-state trip from Los Angeles to San Francisco was half as expensive as an interstate trip from Boston to Washington; both are about the same distance, and the latter trip was regulated. This was an instance of blatant regulatory inefficiency. Jimmy Carter appointed Alfred Kahn to head the CAB. Kahn and the powerful Senator Ted Kennedy worked hard to deregulate air travel. The support for making markets more efficient should have come from across the political spectrum, and in fact it did.

In summary, this book offers a very interesting account of the interplay between ideas and policy. I recommend it highly.