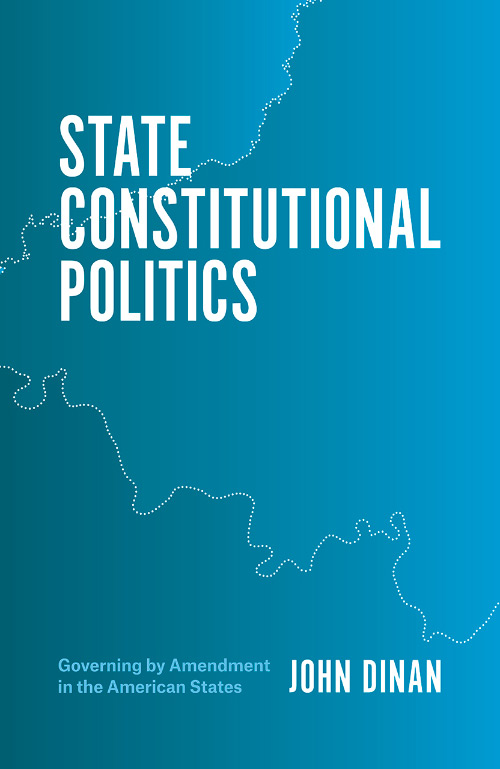 State constitutions are unique relative to the U.S. Constitution in terms of the frequency with which they are amended as well as the topics addressed by such amendments. Explaining why state constitutions are amended so frequently, the margins on which they are amended, as well as the consequences of this practice is the goal of John Dinan’s recent book State Constitutional Politics. Dinan provides not only a comprehensive review of state constitutional history but also an analysis of the motivations of political actors for choosing the constitutional amendment process instead of alternatives such as legislation or reliance on court decisions. The text is exhaustively detailed in its descriptions and yet clear in its conclusions. Dinan has written a definitive book on this important topic.

The book comprises five main parts: an overview of the amendment process across the states; a discussion of amendments that have reshaped institutional authority; a look at amendments that have redefined rights in the states; an analysis of the use of amendments to directly shape policy; and a discussion of the consequences of “governing by amendment.” The initial overview covers the history and differences of state amendment processes: although there is large variance in the number of constitutional amendments across the states, all state constitutions have been amended much more frequently than the U.S. Constitution. Dinan identifies the relative accessibility of most states’ amendment processes as well as a general willingness on behalf of the public and interest groups to pursue amendments in order to secure changes in institutions or policy as the main explanations of the frequency of state constitutional amendment. In terms of accessibility, many processes exist: states allow legislatures to draft amendments, special conventions and commissions to propose amendments, and amendment by popular initiative.

The crux of Dinan’s analysis is a series of chapters breaking down specific examples of amendments to state constitutions by type. The first type is those amendments that affect roles or relative power between state institutions. Although relative power between branches has changed historically at the federal level either through informal mechanisms or the legislative process, at the state level change in relative power has frequently been achieved through the formal amendment process. Perhaps the most obvious of this type of amendment are those that have strengthened local government authority relative to the state—state amendments have addressed topics such as home rule and restrictions on the state legislature’s ability to interfere in localities. In these cases in particular, Dinan points to a concern that state legislators have responded to politically powerful interests as opposed to local residents as a major motivation for taking action to transfer power to localities. This raises the question of why they have pursued such authority through the formal amendment process as opposed to through alternative methods. Here Dinan points to a view that legislative statute has been considered less secure than constitutional amendments, especially as it pertains to depriving the legislature of authority. In this vein, constitutional amendments protect local authority from the threat of repeal by future legislatures.

Similar threads are common in Dinan’s other examples of institutional-authority amendments, including those establishing and regulating regulatory commissions, establishing executive budget systems, and redistricting. The amendment process has been used because it is viewed as more secure than a statute. Dinan’s analysis next turns to state constitutional amendments that have expanded rights and protections beyond those addressed at the federal level. Examples include amendments ensuring religious liberty, equal-protection amendments that extend beyond federal protections, amendments securing rights to keep and bear arms, amendments defining victims’ rights, and amendments offering additional security of property. These amendments at the state level have oftentimes been precipitated by debates surrounding ultimately failed amendments to the U.S. Constitution or U.S. Supreme Court decisions. For example, many states ratified victims’ rights amendments following debates at the federal level in the 1980s and 1990s. Similarly, many states moved to amend their constitutions to restrict state-takings power in the wake of the U.S. Supreme Court’s infamous Kelo decision in 2005. Dinan once again notes that, regardless of the motivation, the decision to proceed via amendment (instead of by legislation) has been due largely to a view that the legislature and/or state courts were not supportive of certain rights or that a dedicated effort needed to be made to protect such rights from repeal by future legislatures and judges.

In addition to these amendments, Dinan also discusses a separate category of amendment that he refers to as “court responsive.” This category includes state amendments designed to limit or overturn state supreme court decisions pertaining to rights in certain areas. Although at the federal level such court decisions may be overturned through eventual changes in the composition of courts through appointments, the more flexible state amendment process allows a direct response. As is typical for the book, Dinan provides a litany of examples, ranging from amendments allowing for state funds to be used for prison chaplains (after courts interpreted previous religious-liberty amendments to disallow such expenditure) to amendments reestablishing the death penalty after court decisions threatened to invalidate it.

The next category of amendments Dinan tackles are designed to constrain the legislature’s ability to enact certain policies and have typically been motivated by a concern that legislators are unable to provide good governance or are susceptible to undue influence. Perhaps the most obvious examples of these policy-constraining amendments are the variety of debt limitations, balanced-budget rules, and tax and expenditure limitations adopted by states to explicitly tie the legislature’s hands. Historical events clearly played a role, with many of the debt-limit amendments in particular following the Panic of 1837. That said, Dinan notes that there has been a recognition that institutional characteristics and the incentive structure facing legislators were more at fault than any particular bad actor—essentially the concerns typically raised by public-choice economists. According to Dinan, there has been a view that “deficiencies in legislative performance are not attributable to legislators acting in bad faith and cannot be resolved by electing different representatives. . . . Rather, these deficiencies have been viewed as enduring challenges best addressed by resorting to the amendment process” (p. 155).

States have also turned to the amendment process to authorize the legislature to take policy action. For Dinan, these amendments present an interesting puzzle: unlike the federal government’s enumerated powers, states have power restricted only by federal and state prohibitions; thus, one might expect so-called policy-authorizing amendments to state constitutions to be unnecessary. Nevertheless, states have at times needed to remove various barriers to policy action, sometimes even untying the hands that had been bound by previous amendments. For instance, state constitutions have been amended to overcome previous debt bans in order to finance a variety of projects and tax limitations—especially requirements for uniformity—or to allow for new forms of taxation. Dinan provides several explanations for these cases of amendments overturning previous amendments—for instance, in the case of debt limitations, after the crisis that precipitated the original amendment has passed, future generations see the limits as no longer necessary. Cultural changes also help to explain amendments authorizing state lotteries, which had previously been banned via amendment at a time when they were viewed as potential sources of corruption.

The final group of amendments Dinan considers are those that directly enact policy. The goal of these amendments is to adopt policy thought unattainable or insecure through normal policy-making channels. Once again, Dinan points to a view of the amendment process as providing additional security from policy reversal by future legislatures or a desire to institute policy that the legislature was unwilling to implement on its own. Here Florida serves as an especially interesting case in that it allows for citizen-initiative-based amendments but not legislation—an amendment process that has been used to adopt policy that was blocked in the legislature, such as bans on smoking.

The final section of Dinan’s book examines the consequences of “governing by amendment.” In many of the examples throughout the book, the amendment process was chosen specifically because it circumvented perceived issues in the legislature, be it the potential for undue political influence or legislator self-interest. The amendment process, then, affected policy in a way that was not perceived of as possible through the legislature: constitutional amendments are uniquely able to “constrain legislators in policy areas where they are viewed as incapable of acting responsibly” (p. 268). The amendment process also allows for the unique ability to preempt the judiciary by enshrining policy in the state constitution, the document on which court rulings that potentially overturn legislation are based.

Dinan’s analysis of state constitutional history is remarkably comprehensive, and his discussion of the motivations for each type of amendment he cites is equally exhaustive. If any shortcoming can be noted in the book, it would be that at times the analysis feels secondary to the history. For instance, the lengthy discussion on states adopting institutional rules to constrain legislative behavior could have been naturally complemented by a discussion of the closely related theoretical work in constitutional political economy. At other points, Dinan leaves open some interesting questions. For example, he makes a continuous argument that amendments are chosen over legislation due to their relative stability, especially with regard to potentially hostile future legislatures or judges. At the same time, however, he continuously notes how accessible the amendment process is in most states, so one could argue that the multitude of examples in Dinan’s book demonstrate that the policies or institutional arrangements attained through the amendment process are also unstable. A similarly unanswered question is why states seem to fear interest-group influence in the legislative process but not in the amendment process. Some more discussion of differences across states (outside of historical examples) would also have been welcome.

That said, noting that a book raises interesting research questions is hardly a significant criticism. State Constitutional Politics is the most well-researched and complete book on this topic of which I am aware. Dinan has gone a long way in presenting the unique characteristics and implications of government under frequently amended constitutions as well as the debates surrounding the use of the amendment process as a substitute for legislation.