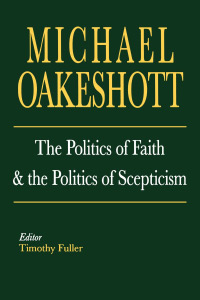 The Politics of Faith and the Politics of Scepticism
By Michael Oakeshott. Edited by Timothy Fuller
Hardcover Paperback
This book review appeared in the Winter 1997/98 issue of The Independent Review.

Without doubt one of the twentieth-century’s most important political philosophers as well as a masterful stylist of the English language, Michael Oakeshott remains—despite a recent upsurge in interest—a lamentably neglected, ignored or, all too often, undiscovered thinker. This situation owes much to his peculiar position in the context of twentieth-century political philosophy: A Hobbesian liberal on matters of the state and a Hegelian idealist for whom the moral life is grounded in the activities of historically situated individuals, he was an original intellect drawn neither to the analyses of English-speaking philosophers nor to the discussions of European thinkers. After some twenty years as a fellow and lecturer in history at Cambridge, he was awarded the chair of political science at the London School of Economics in 1951. Yet in an age of specialization Oakeshott did not write the academic paper but the well-wrought essay or book—deeply informed and reflective of wide learning, graced by felicitous metaphor, and cast in a philosophical mode that is, on occasion, abstract and elusive but always intelligent and suggestive.

Some five months after his death (in December 1990) the current work, hitherto unknown to the editor or other close associates, was found in his cottage in Dorset. This book, undated and divided into six chapters, is accompanied here by an introduction in which Fuller relates the book to salient themes of some of the writings just noted. Having contended in some of these works that we should be wary of political rationalism and that politics, properly understood, is nothing more than the “pursuit of intimations” yielded by traditions or practices of behavior, Oakeshott focuses in these pages on the related theme of how modern European governments since the fifteenth century have been subject to two divergent modes or styles of politics: faith and scepticism. These styles, employing the same vocabulary and rarely found pure and unmixed, are tendencies rather than theories or doctrines, in a sense akin to what Thomas Sowell calls “constrained” and “unconstrained” visions (A Conflict of Visions: Ideological Origins of Political Struggles. New York: William Morrow, 1987).

The style of faith seeks the perfection of mankind in this world and assumes that government is the means for achieving a comprehensive revision of the human condition. Whether it is utopian or seeks only steady improvement in a single direction, the style of faith assumes that human power alone can achieve the end state; thus it not only seeks but welcomes power, allotting to government an omnicompetence that moves far beyond the amelioration of conflict or the maintenance of a legal framework for peaceful interaction. Indeed, the government of faith becomes the very means for arriving at truth, and it demands of its citizens not just obedience or submission but enthusiasm, affection, and love.

Not to be identified with either anarchy or the “night watchman state,” the style of scepticism, grounded in a prudent doubt about our capacity to achieve perfection, assigns to government a specific and limited function: establishing and maintaining a system of rights and duties that, by preventing conflict, allows individuals to fulfill their aims and desires. In holding to these Hobbesian assumptions, the sceptic is as consistent as a public choice theorist; for although a governing institution is required, it “is occupied by men of the same make as the subjects they rule—men, that is to say, who are always liable, when they become governors, to go beyond their terms of reference and impose upon the community an ‘order’ particularly favourable to their own interests” (p. 33). Because a sceptical government has little to do with the imposition of morality, it also follows that “to lead a moral crusade against a foreign country is as much out of character in this style of governing as to lead a moral crusade against any of its subjects” (p. 36).

Having elucidated the divergent principles and assumptions of faith and scepticism, Oakeshott limns a historical thesis: an ideology of faith did not engender the growth of government so much as, in the transition to modernity, the circumstantial emergence of a centralized government—blessed with (among other things) new techniques of information—gave rise to a politics of faith. Because medieval societies lacked the very governmental power that might encourage an enthusiast, it was not until the “tireless, inquisitive, roving hand of government was beginning to be able to reach everywhere” (p. 49) that thinkers harnessed their perfectionist yearnings to the power of the government. Francis Bacon is noted as a “chief architect” (p. 52) of a perfectionism that, unlike the religious variant employed by some Protestants, encouraged the natural and economic mastery of the world through the agency of government. More recently, the politics of faith has acquired more “splendid” examples—aided in this century by wars that have “given us an unrivaled opportunity to carry out expensive experiments in this style of politics” (p. 64), but these experiments remain essentially Baconian.

Scepticism, on the other hand, though responding to the growth of modern power, is not a mere reaction to the style of faith; its roots can be found in the medieval view of government, especially the English conception of Parliament as a court of law. One of its early representatives is Montaigne, but Lord Halifax, David Hume, and Edmund Burke (among others) offer the modern variant: distrust of large concentrations of power and mindfulness of the significance of the rule of law and the independence provided by property. (John Locke, however, violates the sceptical style by allying it with a doctrine of natural rights; and those forms of republicanism that seek political salvation in universal suffrage and democracy also stray from the sceptical style.)

In the penultimate chapter, Oakeshott deals with what he refers to as the respective nemeses of faith and scepticism. Nemesis was a goddess of retribution, but the nemeses of these two styles serve not only as defeats but as self-defeats: for these nemeses are characteristic (essentially or contingently) of each style as it operates in its pure form, deprived of the countervailing pull of its counterpart. The nemesis of faith, essential to it, is its totalistic nature—as government pursues perfection it absorbs every activity until each is an activity of government, thus leaving nothing to be governed! “What exists (for example) is not ‘football,’ but ‘football-in-so-far-as-it-promotes-perfection’” (p. 93). Besides this essential defeat, there are contingent ones: that a government of faith is inappropriate for a complex modern society; that its perfections are not permanent but transitory; that its demand for love and devotion cannot be obtained; that its promise of a comprehensive economic security must involve a loss of security against governmental power; and that the pursuit of perfection comes to be identified with power itself.

Neither so obvious nor so calamitous as the nemesis of faith, that of scepticism is only a contingent probability. Without the pull of faith, a purely sceptical government may not be appropriately aware of change in a complex society “and consequently is apt to be insensitive even to those effects of change which come within its province, namely the appearance of conditions which require an adjustment in the system of rights and duties if a relevant order is to be maintained” (p. 107). Moreover, the formal moderation characteristic of a sceptical manner of governing may be viewed, at least in a culture imbued with the ideals of faith, as bereft of real authority and thereby inappropriate for the age. The final nemesis of scepticism is that politics becomes play, an “activity pursued on certain specified occasions, at fixed times and in a place set apart and according to exact rules, the significance of the activity lying not in a terminal result aimed at, but in the disposition which is enjoyed and fostered in the cause of the activity” (p. 110). And the self-defeat of a style identified with play is that it may become indifferent to winning, an indifference that can be remedied only by an infusion of faith!

What, then, should be done? Having elucidated the two styles of politics as well as their implications, Oakeshott concludes that the politician should pursue not the middle course but the mean—that which is appropriate. The determination of the mean, which for Aristotle requires perception, experience, and judgment, is not found by hewing blindly to one extreme; rather, given the complexity of modern societies, we should recognize historical limitations (and possibilities) and, in so doing, follow the seventeenth-century counsel of Sir George Savile, Lord Halifax (The Character of a Trimmer) who urges us to be “trimmers” who seek to keep the ship of state on an even keel. Nonetheless, in the current situation, in which the style of faith overwhelms all political activity, the trimmer should strive to restore the recognition and understanding of complexity, renew the sceptical impulse, and otherwise sail against the winds of the age: the trimmer must be a sceptic “against the partizans of power” (p. 128).

Surely this is wise advice. In his understanding of the contemporary trimmer, as in his account of the style of scepticism, Oakeshott indicates a preference for a liberalism worthy of conservation, a liberalism more classical than contemporary, grounded not in doctrine but in the historical complexities of a mode of conduct. A contingent grounding of this kind may not suffice for those who hold that some things are True and Certain and that only such things provide motivating value. However, Oakeshott is not providing policy prescriptions or theoretical principles but “a frame within which to set our thoughts to work” (p. 125). Once within that frame, one may still find truth (even if one is less than convinced by Oakeshott’s account of the nemeses or even if one questions whether political perfectionism must be understood in terms of a single comprehensive end). If some wish to contend, however, that Oakeshott’s frame does not easily hold or contain any robust political or moral judgment, then it must be underscored that the point of a frame is to suit a picture and provide stable limits. In this respect, Oakeshott’s work succeeds not only in upholding strikingly lucid, correct, and prescient portraits of two styles of politics but in securing them in a uniquely resonant style.