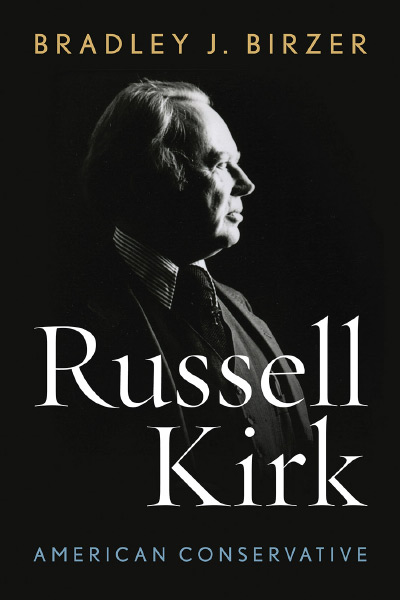 In the past decade and a half, a slew of biographies have been written about Russell Kirk: James E. Person Jr., Russell Kirk: A Critical Biography of a Conservative Mind (Lanham, Md.: Madison Books, 1999; reissued by Rowman and Littlefield in 2015); W. Wesley McDonald, Russell Kirk and the Age of Ideology (Columbia: University of Missouri Press, 2004); Gerald J. Russello, The Postmodern Imagination of Russell Kirk (Columbia: University of Missouri Press, 2007); John M. Pafford, Russell Kirk (New York: Bloomsbury, 2013); as well as Charles C. Brown, Russell Kirk: A Bibliography (Wilmington, Del.: ISI Books, 2011). What is one to make of another book about Kirk? What does Bradley J. Birzer’s new book, Russell Kirk: American Conservative, contribute to what we already know about the life and thought of Russell Kirk? And why this recent return to the study of the man who was one of the founders of post–World War II American conservatism?

Russell Kirk (1918–94) was born and raised in Michigan, served in the U.S. Army in World War II, and obtained his B.A. at Michigan State University, M.A. at Duke University, and Ph.D. at the University of St. Andrews. His thesis for the latter eventually became published as The Conservative Mind (Chicago: Regnery) in 1953. The book received national attention and launched Kirk’s career as a public intellectual. In The Conservative Mind, Kirk uncovers a conservative tradition in Anglo-American civilization that begins with Edmund Burke’s defense of liberty and rights and is continued by a group of varied thinkers such as Samuel Taylor Coleridge, John Adams, Alexis de Tocqueville, Orestes Brownson, Nathaniel Hawthorne, Irving Babbitt, and T. S. Eliot. This view of conservatism, later referred to as “paleoconservatism,” would subsequently be joined with libertarianism and anti-communism to establish modern conservatism in post–World War II America.

With the critical and financial success of The Conservative Mind, Kirk resigned from the faculty of Michigan State University, where he had been employed after he was discharged from the army, and moved permanently to his family home in Mecosta, Michigan. Although he would lecture on college campuses and accept teaching posts for short durations, he became an independent man of letters, publishing some twenty-five books, numerous articles, and countless columns as well as founding the conservative journals Modern Age and the University Bookman. He even entered into politics, campaigning for Barry Goldwater in 1964, and served as the Michigan state chair of Pat Buchanan’s presidential campaign in 1992. For his contributions to American intellectual, cultural, and political life, Kirk was awarded the Presidential Citizens Medal in 1989 by Ronald Reagan.

Kirk’s conservatism differentiated itself from other forms with its emphasis on one’s spiritual nature, an acceptance of the mystery of human existence, and a recognition that innovation must be tied to existing traditions and customs. He was opposed to the rationalism and free-market dogma of libertarians and the nationalist imperial ambitions of neoconservatives. Kirk believed that one had to resort to the “moral imagination,” one’s spiritual and creative powers, to oppose liberalism and to discover ordered liberty within oneself and for society. Although his conservatism does not reside in the corridors of power today, it still resonates in the works of scholars such as Robert Kraynak, Peter Augustine Lawler, and Barry Alan Shain. It is sustained and nurtured by the Russell Kirk Center for Cultural Renewal, directed by his wife, Annette Kirk.

This brief account of Kirk’s life and thought is elaborated in all the biographies mentioned earlier, with Pafford’s and Person’s books being the most accessible. Whereas these works are primarily descriptive about Kirk, McDonald’s and Russello’s books are prescriptive, with the former seeing Kirk’s conservatism as a correction to the ideological deformities that contemporary American conservatism suffers and the latter invoking Kirk’s “moral imagination” as a way to challenge and overcome the problems of modernity in this postmodern age. All these books not only examine Kirk’s ideas but also show how they continue to be—and how they could be—relevant for American conservatism today.

Birzer’s book both deepens and broadens the themes that previous biographies about Kirk have explored. For Birzer, Kirk can be best understood by examining five distinct but interwoven themes: (1) the intellectual development of Kirk’s ideas within a conservative intellectual heritage; (2) the role of the transcendent in Kirk’s life and ideas, with both Stoicism and Roman Catholicism playing key parts; (3) Kirk’s attempt to create a Christian humanist movement in a republic of letters to counter the ideologues of his time; (4) how Kirk’s works of fiction were an expression of his moral imagination; and (5) Kirk’s uneasy relationship to politics, whether in writing for William F. Buckley’s journal National Review or in campaigning on behalf of Goldwater’s presidential bid. Previous biographies about Kirk have explored all of these themes, but none has explored all of them together or so comprehensively.

Drawing on Kirk’s papers and diaries, which have only recently become available to the public, Birzer is able to show Kirk’s ideas both in relation to other conservative thinkers of his time, such as Leo Strauss, Robert Nisbet, and Eric Voegelin, and in relation to literary writers, such as Flannery O’Connor, Ray Bradbury, and T. S. Eliot. Although his own ideas were original, Kirk is seen as part of an intellectual movement opposed to both liberalism and communism, a movement that he attempted to channel into Christian humanism. As primarily a cultural and intellectual movement rather than a political movement, Christian humanism not only welcomed the social sciences, political theorists, and philosophers but also had a place for novelists, poets, and short-story writers. At the center of this Christian humanism was the notion of the transcendent, with Roman Catholicism playing a key role in Kirk’s thought after his conversion. Politics therefore played a secondary role in Kirk’s life and ideas, whether actual politics or fights among public intellectuals. For Kirk, it was the cultivation of the moral imagination rather than political action that would renew society.

Birzer’s book is not only accessible and scholarly but provides the historical, intellectual, and philosophical context to understand the man and his ideas. For years to come, it will be seen as the standard, if not definitive, account of Russell Kirk’s life and ideas. In an age when soundbites substitute for thought and purity counts more than prudence, a reintroduction of Kirk’s ideas is a much-needed antidote to our times, especially for those who identify themselves as conservatives, for, according to Kirk, it is ultimately culture rather than politics that is the remedy to our ills: civil discourse, friendship and family, and the acceptance of our own limitations are what we need more than ever. This vision of conservatism still persists and could be one that provides hope instead of fear for our future.