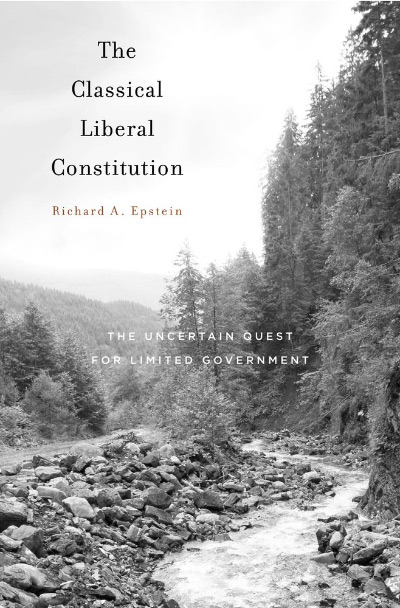 The Classical Liberal Constitution
The Uncertain Quest for Limited Government
Richard A. Epstein
eTextbook Hardcover Paperback
This book review appeared in the Spring 2015 issue of The Independent Review.

Under the influence of the Progressive movement, notions of the proper role of government began to shift in the early twentieth century (see James W. Ely Jr., “The Progressive Era Assault on Individualism and Property Rights,” Social Philosophy and Policy 29 [2012]: 255–82). This transformation was brought to fruition following the political triumph of the New Deal in the 1930s. In the so-called constitutional revolution of 1937, the Supreme Court largely abandoned the classical liberal constitutional order.

In contrast to his endorsement of classical liberalism, Epstein takes steady aim at the currently dominant progressive mindset and New Deal jurisprudence. Progressives saw government as a positive force, believed that individual rights were created by government, not by natural law, and had boundless faith in governance by supposedly impartial experts. It followed that limitations on governmental power with respect to “both structural issues and property rights were perceived as pointless roadblocks that the modern technological state should overcome through a greater concentration and use of government power at all levels” (p. 7). Expansive government authority under the rubric of the police power, Epstein charges, has largely eviscerated the constitutional guarantees of property and contract. He is particularly bothered by the fashionable notion of a “living Constitution,” reasoning that untying constitutional interpretation from the text of the Constitution and its historical underpinnings opens the door to contriving new law out of the air. Under the “living Constitution” theory, little prevents judges from imposing their personal preferences in the guise of law.

Epstein contrasts the classical liberal approach to constitutional interpretation with the progressive view on a wide array of constitutional law issues. He initially examines governmental structures, considering the powers of each branch of the national government. He then turns to individual rights, looking at property and contract, free speech, religion, and equal protection. He does not tackle criminal law. The book contains insights and provocative analysis on page after page.

A few examples will illustrate the range and depth of Epstein’s thinking. He argues that the doctrine of standing, not mentioned in the Constitution, has been utilized to curtail judicial review of controversial programs in suits by citizens and taxpayers. Because no party may have standing to bring a constitutional challenge, the doctrine effectively insulates the administrative state from judicial oversight and thereby strengthens legislative power. As Epstein points out, the broad reading of the Commerce Clause urged by progressives has resulted in plenary congressional authority over virtually all economic activity. Sharply dissenting from this modern position, Epstein contends that the commerce power was intended to facilitate a national market for goods, not to empower congressional control of economic activity, such as manufacturing and agriculture, within states. He persuasively dismisses as a myth the notion that John Marshall’s opinion in Gibbons v. Ogden (22 U.S. 1 [1824]), concerning the reach of the Commerce Clause, somehow paved the way for the New Deal. Here and elsewhere the intellectual supporters of the New Deal pulled Marshall’s comments out of their factual context to provide a veneer of legitimacy for unprecedented expansions of governmental power.

A prominent authority on economic rights, Epstein reiterates his views regarding the importance of property and contractual rights in the constitutional order. He points out that in classical liberal theory there is no categorical distinction between property and personal rights. In this area, the contrast with the progressive outlook is especially striking. Progressives harbor deep suspicions about private property and a market ordering of the economy, whereas Epstein stresses that strong property rights “operate as a constraint against governmental power” (p. 347). He argues that the exercise of eminent domain should be restrained by a strict reading of the “publicuse” requirement to prevent politically connected interest groups from persuading government to take property for their benefit at the expense of more vulnerable individual owners. The “just compensation” requirement alone, Epstein cogently insists, is not sufficient to prevent eminent-domain abuse. This is especially true in view of the tendency for government to systematically undercompensate property owners, a topic Epstein does not explore in this book.

Epstein also champions the freedom-of-contract doctrine, which addressed parties’ ability to enter voluntary transactions, and defends the much-abused decision in Lochner v. New York (198 U.S. 45 [1905]). He reasons that Lochner was consistent with the classical liberal preference for competition and individuals’ right to strike their own bargains (see also David E. Bernstein, Rehabilitating Lochner: Defending Individual Rights against Progressive Reform [Chicago: University of Chicago Press, 2011]). Curiously, Epstein gives only passing attention to the once-powerful Contract Clause, part of the original Constitution designed to protect existing agreements from state abridgement. The Contract Clause seemingly interposes an absolute bar to state interference with antecedent agreements. Yet the provision has been largely eviscerated, a victim of the same progressive ideology that Epstein so passionately decries (see JamesW. Ely Jr., “Whatever Happened to the Contract Clause?” Charleston Law Review 4 [2010]: 371–94).

Although Epstein’s primary target is the reigning progressive orthodoxy, he is at pains to disassociate himself from radical individualism. Indeed, he flatly proclaims that “the Constitution is not a libertarian document” (p. 193). The framers may have harbored ambivalent feelings about government, but they understood that some type of government was essential to protect liberty and property. Their solution was to establish a limited but viable national government, certainly not to allow anarchy to prevail.

Nor is Epstein comfortable with all the constitutional positions advanced by political conservatives in recent years. He cautions against overstating the power of the president as commander in chief to wage war and to hold detainees without due process. In this context, Epstein is critical of the Supreme Court decision in United States v. Curtiss-Wright Export Corp. (299 U.S. 304 [1936]), which affirmed extensive presidential power in foreign affairs. He also takes to task those conservatives who strictly adhere to a doctrine of judicial restraint. Epstein declares that “conservative originalists cannot remain faithful to the twin commitments of fidelity to text on the one hand and judicial restraint on the other” (p. 570). He points out that the Constitution was never intended to endorse unbridled democracy and that judicial intervention is necessary to vindicate the guarantees of liberty and property and to require lawmakers to follow the Constitution. Epstein might have also noted that Progressives in the early twentieth century first urged restraint as a means to stop property-conscious courts from scrutinizing regulatory legislation. Judicial restraint simply offers no protection to individuals’ property or other rights, leaving them to the whims of lawmakers.

Despite his sweeping challenge to modern constitutional thought, Epstein seems pessimistic about any restoration of classical liberalism. “A monumental sea change in constitutional approach,” he observes, “is not in the cards” (p. 365). Indeed, he further states that “[i]t may be impossible to return to a strong regime of property and contract rights” (p. 365). Epstein recognizes, moreover, that some judicial decisions, even if wrongly decided, are so entrenched that as a practical matter undoing them would be very difficult. Drawing on an analogy to the common-law doctrine of prescription, he invokes the concept of a prescriptive constitution that dictates sustaining long-standing but dubious constitutional decisions on which extensive legislation is based. Thus, Epstein maintains that expansive federal controls over the economy do not rest on a correct reading of the Commerce Clause. Nonetheless, he suggests that many federal programs grounded on an erroneous interpretation of the commerce power should be allowed to stand because it is just not feasible to eliminate them in view of settled reliance interests. Epstein is adamant, however, that there is no excuse for further extensions of federal power into new fields. Thus, he agrees with the Supreme Court that the individual mandate of the Affordable Care Act of 2010 exceeded the scope of congressional authority under the Commerce Clause and could not be justified by any pattern of reliance.

Epstein’s book is an important contribution to the literature on constitutional interpretation and is bound to spark lively debate. Epstein has authored a bold call for a fundamental reconsideration of the prevailing norms in modern constitutional law. Although there is certainly room to differ with his handling of particular issues, he is on solid ground in questioning New Deal jurisprudence that distinguished between property and other personal rights. Nothing in the text of the Constitution or the framers’ views suggests that such a distinction is warranted. On the contrary, robust property rights were seen as a bulwark to protect individuals from overbearing government. All those interested in the future of constitutional law, whatever their outlook, could profit from this magisterial volume