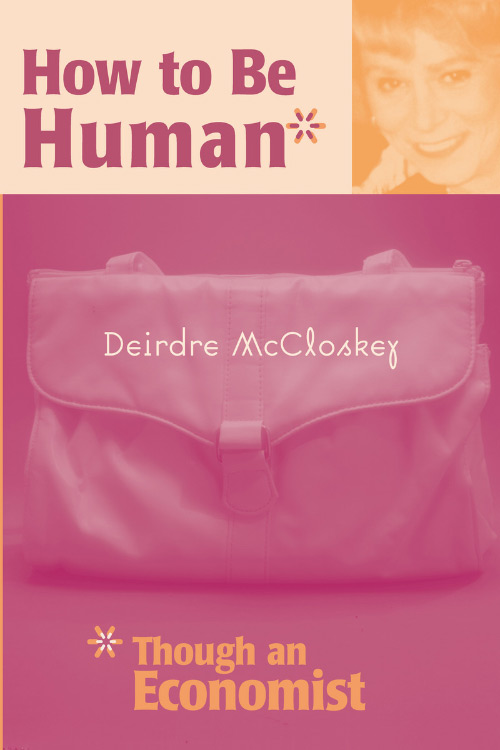 How to Be Human Though an Economist
Deirdre McCloskey
Hardcover Paperback
This book review appeared in the Fall 2002 issue of The Independent Review.

Most of the essays in How to Be Human Though an Economist were published originally in Deirdre McCloskey’s regular column in the Eastern Economic Journal. The material is sophisticated and serious but not technical, and many noneconomists will be able to follow along without difficulty. In a short review, it is impossible to summarize all the essays. In general, the book has to do with the economics profession—what McCloskey thinks is wrong with it and how to fix it. Much of the material will be familiar to anyone who has read McCloskey’s earlier books—The Rhetoric of Economics (1985), The Writing of Economics (1986), and The Vices of Economists; The Virtues of the Bourgeoisie (1997). The essays are grouped loosely around basic suggestions that sound like those in the latest self-help book: be yourself, be brave, be ethical, write better, read more.

A number of the essays discuss the lives of economists who McCloskey thinks have been themselves and who have been brave, ethical, well read, and so forth. Most of the featured economists are classical liberals—for example, Jim Buchanan, Armen Alchian, F. A. Hayek, and P. T. Bauer—but a fine essay is also devoted to Amartya Sen, no libertarian. McCloskey also speaks well of Robert Solow but is critical of George Stigler. How do you get on McCloskey’s “A” list? Being smart is not enough. You need to care about the real world, and you need to want to tell your story to other people. That’s it really. But it is remarkable how many economists don’t actually care about the real world and have no interest in communicating what they know to others.

McCloskey includes in the collection a very favorable essay about feminist economist Barbara Bergmann, not because McCloskey likes her policies, but because Bergmann cares about the right things—children in poverty, for example. So what if her policy prescriptions are wrongheaded? At least she’s an economist interested in the real world, not in some silly mathematical existence proof.

McCloskey criticizes the emphasis in economics on being “smart.” Smart economists try to dazzle us with their conceptual insight and mathematical prowess. They don’t read much outside their own area of expertise, and they certainly don’t read history, philosophy, or classic literature. Often they are densely ignorant of the world, even of the economic events of the world.

McCloskey also takes aim at the overemphasis on being “nice.” Not that being nice is bad, but some not-so-nice people have good ideas, and we should not reject those ideas out of hand just because their advocates are disagreeable.

Another interesting series of essays is devoted to topics such as “how to run a seminar” and “how to host a speaker.” These essays would make excellent reading for many young faculty members.

Perhaps my favorite part of the collection is the “read more” section, in which McCloskey implores us (economists) to take the time to read outside of economics. She even provides us with a reading list in the humanities. In another essay, she implores us to keep learning more as adults. No doubt, much of college is wasted on young adults who have so little life experience. Sure, they can learn differential calculus, but can they really understand Plato? Or even Hayek? McCloskey suggests we take classes as adults. For those of us who work on college campuses, there is little excuse not to.

Most economists I know will say I’m nuts to waste my time on Socrates—haven’t I learned about the gains from specialization? McCloskey replies that the issue is not about specialization; it’s about specialization and trade. It makes no sense to specialize and then hoard what you’ve produced. Intellectual trade means you write so that other people can understand you, and you read other people’s work.

A large section of the book is devoted to McCloskey’s on-going and largely futile war on “statistical significance.” McCloskey is not the only critic of how empirical statistical research is conducted, but she is certainly the most vocal one. Every economist who has ever estimated a regression equation should read these essays.

What’s wrong with statistical significance? Well, it simply tells the researcher (in a very arbitrary way) that a particular finding probably would show up again if we were to examine another sample of the same underlying data. It does not tell us whether the finding is important or not.

One constantly encounters this confusion. Suppose that in medical research we find that taking a particular drug reduces the likelihood of contracting lung cancer by one-half, and the relationship is “statistically significant.” Suppose, however, that the probability of contracting lung cancer is only 0.00001 to begin with, so the drug reduces the probability by just 0.000005. Few of us would consider this risk reduction to be important (especially if the drug is very expensive). Statistical significance is not the same as importance.

The point also applies in reverse. Important but statistically insignificant research findings sometimes are rejected unjustifiably. Again, suppose in a drug trial with eight lung cancer patients you found that two of the eight were cured of the disease. It is likely that, given this small sample size, a test of statistical significance would show the result to be statistically insignificant. But wait a minute. Two people—25 percent—were cured! That sounds important to me.

Sad to say, most economists, myself included, ignore McCloskey’s arguments about statistical significance. It is shameful, but the pressure to publish drives most of us young economists to adhere to the profession’s orthodoxy.

What didn’t I like about the book? Since McCloskey’s sex change, she has adopted a motherly tone in her writing. She sprinkles her writing with feminine words such as “dear” and bashes men throughout (“oy, guys!”). I suppose she has embraced this shtick to show that she is now a woman, but it’s annoying. And listen up, Deirdre McCloskey, it’s bad rhetoric. McCloskey has made a name for herself by arguing that we economists need to use better rhetoric, to tell better stories, and so forth, but no one enjoys a stern lecture from mother (or worse yet, from Aunt Deirdre). Her message, which I like, is compromised by this overdone act. This complaint notwithstanding, I enjoyed the book and recommend it to anyone interested in what’s wrong with the economics profession.

Robert A. Lawson
Capital University
Economic PolicyEconomistsEconomyGovernment and PoliticsLaw and LibertyPhilosophy and ReligionPolitical Theory
Subscribe Buy This Issue Get the App