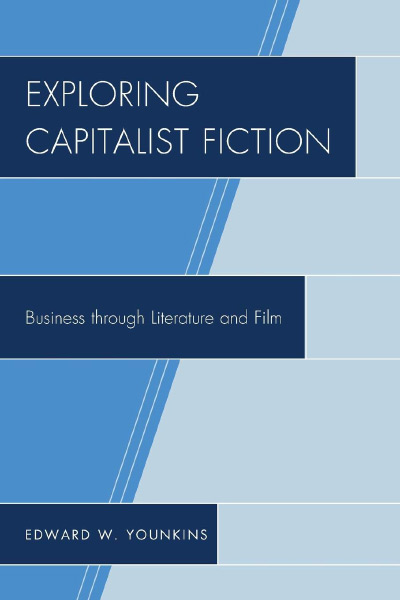 “The underpinning premise of this book,” submits Edward W. Younkins, who is professor of accountancy and director of graduate programs in the Department of Business at Wheeling Jesuit University, “is that fiction, including novels, plays, and films, can be a powerful force to educate students and employees in ways that lectures, textbooks, articles, case studies, and other traditional teaching approaches cannot” (p. ix). Academicians in the humanities ought to take note of this premise, which implies that, despite literary scholars’ efforts over several decades to use creative works as pretexts for advancing progressive, socialist, neo-Marxist, and generally left-wing politics, the worth of literature is not in political appropriation, but in humane education; more fundamentally, the importance of literature is enjoyment. What follows from enjoyment—lessons learned, wisdom gained, knowledge tested—is conditional upon individual gratification.

That does not mean that economics and politics may not inform literary theory and criticism. Works of literature are commodities that reveal much about what cultures demand and that influence how political arguments become framed; therefore, capitalist and free-market literary theories, which are more humane and tenable than many literary theories currently circulating, ought to be as common as materialist criticism and neo-Marxist phenomenology or hermeneutics. For too long those hostile to capitalism have monopolized conversations about literature and literary studies and, in so doing, have undermined the credibility of humanities departments and curricula and even, I would argue, brought about the gradual decline in humanities enrollments, funding, and compensation.

Exploring Capitalist Fiction is a corrective, but one that is not likely to have a wide impact among humanities scholars. That Younkins is an “outsider,” which is to say a member of a department not traditionally associated with the humanities, means that his book will not be taken seriously by the literary establishment, which, ironically, is inclined to deride the business professionals who subsidize humanities research and make possible endowed chairs, sponsored journals, and humanities programs, materials, and benefits.

Exploring Capitalist Fiction is not tendentious and does not advocate an overhaul of literary studies. It is, at essence, pedagogical, analyzing as it does twenty-five creative works (novels, plays, and films) that portray and discuss business activity and fictional businesspeople. To his credit, Younkins does not treat as heroes those writers who decried or pooh-poohed capitalism, nor does he entertain the Marxist theories that depict the socioeconomic base of society as transmitting ideological and hegemonic presuppositions to fossilized classes of people by way of arts and literature. Rather, he hopes to teach business and management students as well as business leaders in the professional world by exploring imaginative literature. Not only that, but he hopes to provide these individuals with material to teach with. Each chapter represents something like extended teaching notes with “previews” and “brief summaries” of literary texts by authors as wide-ranging as Ayn Rand, Henry Hazlitt, William Dean Howells, Sinclair Lewis, F. Scott Fitzgerald, Arthur Miller, and David Mamet. The intended audience for Exploring Capitalist Fiction is, therefore, not literary scholars, but teachers and students and leaders of business. Literary scholars could, however, learn from Younkins, especially from his apparent love of literature, a love that ought to drive literary scholars in their own criticism and teaching.

Majoring in English and other literary subjects has become a risk, if not a liability, for young people seeking jobs in a tough economy. If humanities disciplines cannot help young people to secure the jobs they want or to cultivate the skills they need outside the academy, then these disciplines must at least inspire and entertain and motivate young people in order to survive in their current form. As Mark Bauerlein puts it, “[S]tudents enroll and politicians fund and donors donate because they care about the humanities themselves, and they care about them because they’ve had a compelling exposure to a specific work” (“What Dido Did, Satan Saw, and O’Keeffe Painted,” New Criterion 32 [November 2013], 4).

Without such “compelling exposures,” the humanities are nothing: there is little obviously useful about them, and their legitimate value is undermined when their most vocal proponents pervert them with bad economic policies and imperialistic leftism. By advocating for economic and political theories that are absurd, silly, obsolete, or irrelevant, literary scholars in particular and humanities scholars in general have failed to demonstrate to young people, administrators, and the general public that students would benefit from majoring in literary subjects or that there is any worth in teaching literature at the university level. The burden of proof has for the past few decades been on literature scholars to justify their station in the university, and they have failed and continue to fail to do so.

And then there is Younkins, a business and accounting professor who proposes that literature can and ought to teach business students and to train and equip business managers. His message is simple: literature is enlightening. He tells us over and over how valuable creative works can be: “Works of fiction can address a range of issues and topics, provide detailed real-life descriptions of the organized contexts in which workers find themselves, and tell interesting, engaging, and memorable stories that are richer and more likely to stay with the reader or viewer longer than lectures and other teaching approaches” (p. ix). “Reading novels and plays and watching films are excellent ways to develop critical thinking, to learn about character, and to instill moral values” (p. ix). “Imaginative literature contributes to the freedom and individual development of both authors and readers. Fiction unleashes the imaginative and creative powers of the author and stimulates the inventive, evaluative, and decision-making capabilities of readers” (p. 1). “Novels, plays, and films can be useful in relating ideas found in the fictional world to the real world and to what is found in articles, textbooks, and so on” (p. 1). “Fiction empowers individuals’ imaginations to transcend the empirical constraints that circumscribe them” (p. 267).

Such hopeful and arguably platitudinous refrains about the utilitarian import of literary study abound in Exploring Capitalist Fiction. They can be summed up in a phrase: “literature matters.” But literature, according to Younkins, is not merely an instrument or a resource for acquiring practical skills: “Literary texts can be sources of inspiration and character formation and can develop one’s capacity to empathize with others. They can provide insights into the subtleties of human nature. They can teach significant truths about the human condition” (p. 268).

Younkins doesn’t contradict himself by making self-awareness and fulfillment tributary to professional skills and success. He’s struggling with a question that goes beyond his book, a question that humanities scholars, whose careers and professions are at stake, continue to ask: What is the point of studying imaginative literature? By synopsizing disparate and even contradictory themes in several imaginative works and speculating about “what can be learned” from them, Exploring Capitalist Fiction implies that there isn’t a point; rather, there are many points, any one of which might obtain in a particular context. This conclusion is as liberating as it is confining; it won’t settle the unfriendly debates or redirect the ongoing conversations about the future of the humanities, but it might nudge us closer to those possibilities, if only by suggesting that workers and business moguls alike can gain insight through literary texts.

Younkins’s chapters are also deceptively compelling because of their uncomplicated appeal to literary theories and criticism that do not fall within what Harold Bloom calls the “School of Resentment.” Younkins is not, strictly speaking, a literary theorist or critic, and his chapters should not be held to the standards of the Modern Language Association or compared with literary theories found in the most prominent peer-reviewed journals because he attends to structure, theme, metaphor, and moral—the basics, in other words. The basics might seem eye-rollingly banal and pedestrian to the tenured humanities professor, but aren’t they charming? They help Younkins to come across as the hopeful gentleman, not the aggrieved pedant. And how refreshing it is to see literary texts treated with integrity rather than as vehicles for Marxist-inflected theories about race, class, and gender (legitimate topics of study when they aren’t cover for radical politics).

Take, for example, Younkins’s chapter on Arthur Miller, who was known for fraternizing with Communists. Rather than opining about Miller’s intentions when he createdWilly Loman or moralizing about commodity fetishism and class alienation in the plot of Death of a Salesman, Younkins turns his evaluative judgment on Willy: “Willy appears to have been obsessed with his goal of being known as a great salesman rather than with actually being a great salesman. He takes little or no delight in the activity itself” (p. 114). Moreover, Willy, who “did not learn from his mistakes” and whose “dream [was not] based on the reality of hard facts,” creates expectations for himself that cannot be met; he abandons his talent and appreciation for physical labor and seeks satisfaction in what he believes others will respect (p. 114). Younkins doesn’t mention Jacques Lacan and doesn’t need to: Willy’s mimicry and narcissism and desire are complicated enough; students must master the primary text before extrapolating to psychoanalysis.

Younkins’s clear, cut-to-the-chase prose earns him an audience, or it ought to. Businesspeople might carry his book on a plane, stuff it in their briefcase, read portions of it over breakfast or while settling into bed for the evening. True, Exploring Capitalist Fiction has as little chance of being taught in humanities courses as the typical humanities professor has of embracing capitalism, but who said humanities professors must have a monopoly on literature? Good literature is good to read, for businesspeople as for anyone; it moves CEOs and corporate counsel just as it moves lettered bibliophiles. It won’t make nations lay down their weapons; won’t stop terrorism or genocide; won’t eradicate inner-city violence or prevent school shootings; won’t reform hardened criminals, reduce taxes, or eliminate human trafficking; won’t motivate politicians to abandon their pet projects and back-room deals; and probably won’t even inspire undergraduates not to plagiarize. Literature is not—thank heavens—a template for living. But it will, if it’s good enough, impress itself on our memory and then force us, whenever we recall it, to be more contemplative. No one can say for sure what that’s worth, and the few of us who advocate capitalist or free-market literary theory should acknowledge the priority that this personal aspect of literary experience deserves.

Humanities scholars will rush to disavow Younkins, if they bother to read him at all. One anticipates their protest: “This isn’t how we do it!” And they’d be right. But Younkins’s style is so boldly plain and polite, his explanations and speculations so indifferent to the prevailing schools of literary theory and criticism, that he seems not to care what others think of him or his book. What he seeks, instead, is edification of the person, from the college student to the office intern to the business leader and, indeed, all men and women who suit up for the office each day. A nobler ambition for the humanities could scarcely be designed by a more “initiated” literary scholar.