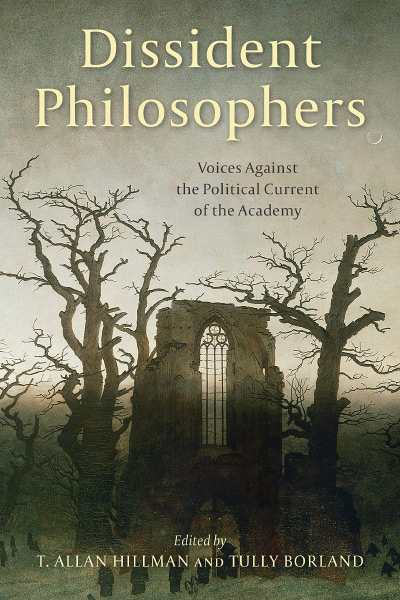 Dissident Philosophers
Voices against the Political Current of the Academy
Edited by T. Allan Hillman and Tully Borland
Kindle Hardcover
This book review is a web exclusive for the Fall 2022 issue of The Independent Review.

Philosophers since Socrates have thought of themselves as making provocative arguments about ideas that matter. But as Nathan Cofnas recently said after being publicly mobbed: “the philosophy establishment claims to trace its intellectual lineage to Socrates, but its true lineage goes back to the Athenians who killed him.” It is fitting, then, that one of the best articles in the recently published anthology, Dissident Philosophers, was penned by Cofnas’s mentor, Neven Sesardić.

Sesardić documents his life as an accidental dissident. He first earned the scorn of journalists and government agents when he refused to teach the communist propaganda that his home country of Croatia required of him in the 1980s. When he moved to Western Europe in the 1990s, Sesardić noticed different questions that couldn’t be asked—or questions for which there was only one acceptable answer—and proceeded to give the wrong answers to forbidden questions. These questions concerned the heritability of mental traits, especially with regard to group differences. While coming to the politically incorrect conclusion on these matters wouldn’t get you imprisoned, as denying the divinity of Marx could in Eastern Europe, it could get you defenestrated from the secular clergy that comprises modern academia in the West.

Dissident Philosophers is a collection of essays by philosophers with very different views. But two themes consistently emerge: (1) it is increasingly impossible to do interesting intellectual work on issues that matter in the social sciences and humanities; (2) in many cases the arguments considered “out of bounds” are precisely those that would undermine the intellectual foundations of the political culture in which we find ourselves. With the triumph of progressivism over the last 75 years, it is perhaps unsurprising that the corpus of the modern university is permeated with egalitarian assumptions that are increasingly at odds with observable reality.

While the essays in Dissident Philosophers are uneven—some are better than others—the book is a much-needed strip search of some of the uglier features of our age. It also contains some compelling autobiographical sketches that are usually absent from academic essays.

Two standout essays, by Jason Brennan and Michael Huemer, focus on bias against conservatives, libertarians, and other non-conformists in American universities. Brennan cites studies that empirically demonstrate these prejudices and draws out the epistemic consequences of systematically suppressing entire lines of research. For example, Brennan cites a study showing that the further faculty locate themselves on the political left, the more likely they are to openly advocate censoring ideas they disagree with (this finding was recently replicated in an even more comprehensive study by Erik Kaufmann). According to Brennan, academic censorship can be overt or covert, and it can come in a professor’s role as journal editor, teacher, or committee member tasked with hiring and promoting faculty, or allocating grant money.

As Huemer emphasizes in his essay, university administrators could theoretically encourage students to learn about psychological biases and argumentative fallacies shared by all people. They could encourage viewpoint diversity and self-reflection that might improve our thinking and promote intellectual humility. Instead, they require students to take “diversity” courses that indoctrinate them into a set of increasingly bizarre ideas that usually involve denigrating the foundations of Western civilization. Given the incentives they face, there’s not much choice: administrators who promote unorthodox scholarship, or who deny the holy trinity of Diversity, Equity, and Inclusion are unlikely to keep their jobs.

The two most personal essays in the volume are by Dan Demetriou and William Vallicella.

Vallicella chronicles his political journey, and in doing so he discusses how the taboos that prevent academics from questioning egalitarian assumptions made him lose his faith. According to Vallicella, the central tenet of the modern Cathedral (as Curtis Yarvin calls it) is that disparities in outcomes are caused by oppression or poverty or some other unfortunate human contrivance—that they cannot be caused by natural differences between people, since that would be cosmically unfair. Vallicella follows Nietzsche in describing the progressive egalitarian view as a secular offshoot of a certain strand of Christianity. The psychological trick, he argues, was to “transform the metaphysical concept of equality of persons into an empirical concept of equality of measurable attributes” (p. 268). Now that the transformation is complete, affirming the reality of human differences can get you fired. Just ask Bo Winegard and Noah Carl.

Demetriou writes about the infamy that followed from a Facebook post in which he expressed nationalist views about immigration. What got him in trouble was his worry that mass migration from countries with a lower average IQ might have negative consequences for the host country to which they migrate. The post was apparently screen shotted and shared among faculty at his university in Minnesota, and eventually picked up by the state and national media. The next thing he knew he was on Tucker Carlson’s show, the most popular program in cable news.

Demetriou has since modified his views about immigration, but in an even more conservative direction. “As I see things now,” he says, “people benefit very little from mass migration into their land of any sort, be it low-IQ or high. After all, what does a growing GDP of a ‘country’ matter to a people if the country is no longer theirs? A population’s true interest lies in maintaining its homeland for itself and its children” (p. 133). The funny thing about getting mobbed is that it often leads people down paths they wouldn’t have otherwise explored.

Whatever the goals of censorship are, it seems to backfire when it comes to the beliefs dissidents form, even if it works to prevent ordinary people from knowing what dissidents believe. Maybe this is the bright side of the new dark age.

Dissident Philosophers is full of spicy ideas and farcical tales that are impossible to tell outside of an anthology edited by outsiders. That is why it’s worth reading, even when you disagree with individual arguments or authors.