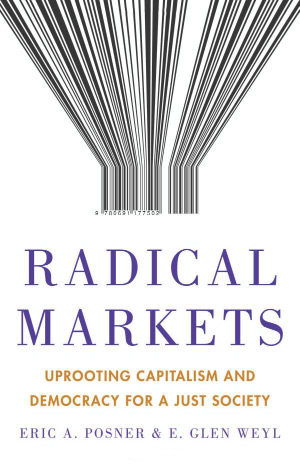 Radical Markets
Uprooting Capitalism and Democracy for a Just Society
By Eric A. Posner and E. Glen Weyl
Kindle Hardcover Paperback Audiobook MP3 CD
This book review is a web exclusive for the Spring 2019 issue of The Independent Review.

Market power may be on the rise, but at least the market in books explaining the sad state of liberal democracy remains competitive. Radical Markets stands out in the crowded field of titles with a bold and refreshingly original argument. The authors, Eric Posner and E. Glen Weyl, revive a dormant tradition in political economy represented by figures like Henry George and apply its ideas to our current moment using the formal techniques of mechanism design. The result is a welcome contribution to public debate that will interest economists, political scientists, and philosophers.

Like other analyses of the current political moment, Posner and Weyl’s point of departure is the combination of rising inequality, slow economic growth, ideological polarization, and government dysfunction in liberal democracies. They identify two proximate causes for these trends: first, declining competition in existing markets, and second, the absence of competitive markets in important areas of human life. More “radically,” an intellectual mistake is the root of both causes. Both Left and Right mistakenly assume markets require private ownership, and private ownership requires markets. This mistake blinds us to the tension between private property and market competition on the one hand and the possibilities of markets without private property on the other. To remedy our present ills, Radical Markets turns to a tradition of “Market Radicals” including William Jevons, Leon Walras, Henry George, and William Vickrey who argued for limiting private property rights to promote competition (against the Right) and that truly competitive markets could reduce inequality (against the Left). These political economists believed markets could deliver efficiency and equality rather than efficiency at the cost of equality.

Market Radicalism’s analytical framework usefully clarifies what’s at stake and what’s involved when markets as institutions organize social life. Using the tools of mechanism design, Posner and Weyl envision markets that not only improve efficiency and reduce inequality but also transform social and political relationships. While Radical Markets’ proposals may be implausible, explaining why they are implausible forces the reader to think more carefully about the social contexts of successful market institutions. The central challenges for the authors’ vision of transformative markets is its neglect of the place for non-market institutions in a just society and the socially embedded character of successful markets. More fundamentally, the complex interactive dynamics between markets and their surroundings orient us toward a reforming attitude emphasizing incrementalism, reversibility, and robustness rather than the model of “market radicalism.”

Radical Markets’ five core chapters develop proposals for free, open, and competitive markets in real property, votes, international migration, equity markets, and data. Chapter 2 presents Posner and Weyl’s most sweeping proposal—the “common ownership self-assessed tax” or COST, which they have developed at length elsewhere (Eric A. Posner and E. Glen Weyl, “Property Is Only Another Name for Monopoly,” Journal of Legal Analysis 9, no. 1 [June, 2017]: 51–123). The COST involves a combination of public ownership of some asset class with the right to rent those assets subject to continuous auction. Rental payments for assets under COST would be calculated through a combination of the self-assessed value of the asset to the user and a tax rate set in proportion to the turnover rate of that asset class. Asset classes with a higher turnover rate would be taxed at a higher rate. A continuous auction means the public value reported by the user of the asset is the price she would be willing to accept from any potential bidder. A COST addresses the “holdup problem” created by private property rights by forcing owners to declare a price at which they would sell the asset. Against the gains to “allocative efficiency,” however, public ownership with continuous auction reduces “investment efficiency” by reducing incentives to improve an asset. An optimal COST balances the marginal gain in allocative efficiency against the marginal loss in investment efficiency for a given asset class. Posner and Weyl propose to substitute revenue from a national COST (they estimate at 20% of national income in the U.S. case) for existing taxes and rebate the remainder as a social dividend.

A second proposal would introduce “quadratic voting” to elections. Most simply, quadratic voting allows a voter to cast n votes, where the price of n votes is n2 of some unit (e.g. dollars). A quadratic voting rule allows expressions of preference intensity. Intensities matter for the efficient provision of public goods, but intensity-sensitive inputs create incentives to free-ride on those with the greatest willingness (or ability) to contribute. Quadratic voting address this free rider problem because the marginal cost of n votes rises as a linear function of n, and under certain conditions, it guarantees efficient public goods provision. In response to concern that quadratic voting with money favors the rich, the authors suggest an equal endowment of “voice credits” for each citizen. Citizens could vote for different candidates and referenda in an election cycle or save their votes for future elections, subject to the constraint that the sum of the squares of their votes in any election cycle is less than their available credits.

Posner and Weyl further propose a market for temporary work visas and legal recognition of data production as a labor relationship between internet users and tech companies. Their most conceptually “mainstream” proposal would use antitrust law to limit intra-industry diversification by institutional investors. Their “visas between individuals” program would be similar to a decentralized H1-B visa program, in which individual citizens would contract with temporary workers to provide in-kind services such as housing in exchange for financial compensation (for example, by garnishing the worker’s wages). In the case of data, they argue the current barter model of free services for user data cannot meet the requirements of sophisticated machine learning algorithms. They call for markets in data to improve data quality, reduce inequalities resulting from automation, and recognize the labor of ordinary people in a digital economy.

Posner and Weyl distinguish both markets and states from what they call “moral economies”—systems of production and distribution characterized by reciprocity, gift relationships, and mutual aid. They quickly set aside moral economies for their inability to organize cooperation in large, anonymous societies. The step resembles the dichotomy between state and private ownership memorably criticized by Elinor Ostrom (Governing the Commons: The Evolution of Institutions for Collective Action, 1st edition [New York: Cambridge University Press, 1990]) for overlooking decentralized, non-market institutions, and their exclusion artificially narrows the possibilities for reform. For example, Posner and Weyl suggest a COST-based licensing system for the electromagnetic spectrum as an improvement over the FCC’s current policy of auctioning private rights to spectrum frequencies. A further alternative, however, is to govern the EM spectrum as a public commons with access regulated by software and smart devices (for discussion see Yochai Benkler, “Overcoming Agoraphobia: Building the Commons of the Digitally Networked Environment,” Harvard Journal of Law & Technology 11, no. 2 [Winter 1998]: 287–400). Models of governance that preserve common access are particularly appropriate for resources subject to increasing returns or whose future applications are uncertain and dynamic (Lawrence Lessig, The Future of Ideas: The Fate of the Commons in a Connected World, 1st edition [New York, NY: Vintage, 2002]; Carol Rose, “The Comedy of the Commons: Custom, Commerce, and Inherently Public Property,” University of Chicago Law Review 53, no. 3 [1986]: 711–81). While a public forum may be subject to congestion and waste from overuse, the forum also increases in value as more users communicate through it. Common access lowers the transactions costs of experimentation in novel uses of a resource.

The absence of non-market institutions in Radical Markets reflects the authors’ understanding of the normative relationship between markets and politics, one memorably criticized by Jon Elster in his critique of social choice theory (Jon Elster, “The Market and the Forum: Three Varieties of Political Theory,” in Foundations of Social Choice Theory, ed. Aanund Hylland and Jon Elster [New York: Cambridge University Press, 1989], 103–33). Elster distinguishes the preference-aggregating approach of social choice theory from a model of collective choice in which individuals judge what is best for the group to do. Posner and Weyl vacillate between these two models of collective choice. They favor quadratic voting for its measure of intensity preferences and ability to protect minorities. However, they also argue that quadratic voting “encourages moderation and compromise” by making intense preferences costlier to express (p. 124). They note that strong norms against vote trading and collusion would be necessary to preserve the desirable properties of the quadratic voting rule. However, vote-trading and collusion are problems for a preference-aggregating approach. It would be challenging to distinguish “collusive” influence under quadratic voting from the influence of effective deliberation. Quadratic voting also introduces another margin for expressions of group identity and might amplify the voices of voters with the most intense preferences on an issue (Louis Kaplow and Scott Duke Kominers, “Who Will Vote Quadratically? Voter Turnout and Votes Cast under Quadratic Voting,” Public Choice 172, no. 1 [July 1, 2017]: 125–49).

A different approach to reform in Ostrom’s spirit would emphasize the diversity of institutions and human behavior. Institutional complexity means reformers necessarily have incomplete understanding of their target institution and its context. Reformers would pursue flexibility, adaptation to circumstances, and robustness to error rather than optimality. One of the most celebrated recent examples of market design—a market called the “Choice System” used by the non-profit Feeding America to allocate food to local food banks—exemplifies this approach (Canice Prendergast, “How Food Banks Use Markets to Feed the Poor,” Journal of Economic Perspectives 31, no. 4 [November 2017]: 145–62). In addition to the market’s formal properties, its legitimacy and stability reflect a spirit of humility and attention to Feeding America’s specific circumstances and organizational culture by the team of University of Chicago economists.

Posner and Weyl are sensitive to the need for caution and experimentation, but radicalism is neither cautious nor experimental in spirit. Their hope is that under quadratic voting, “markets would no longer be seen as opposed to public action but as the mechanism through which public action takes place” (p. 272). An alternative approach would emphasize the historical and sociological contingencies necessary for such markets to arise. Despite these limitations, Radical Markets provides a valuable contribution to public policy and political economy, and its intellectual ambition distinguishes it from other books in the genre. Even if they ultimately disagree with its conclusions, thoughtful readers will find it stimulating.