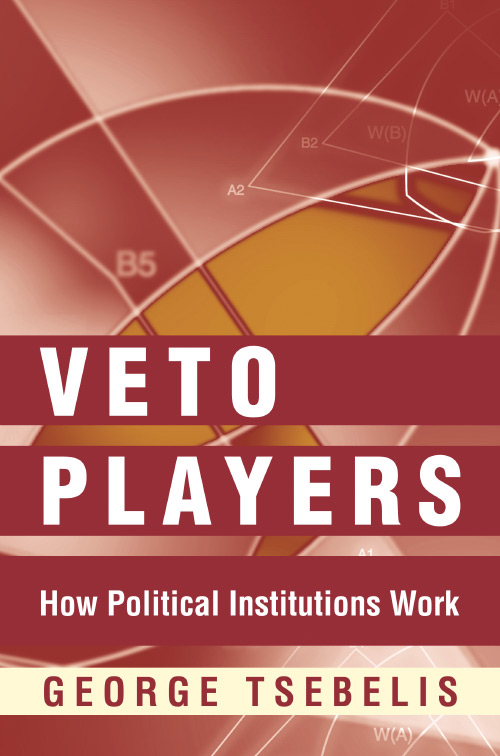 In Veto Players, George Tsebelis advances a grand thesis. Simply put, all political institutions can be modeled as a framework of vetoes. Different institutions have predictably different impacts on shaping the way preferences become policy because each institution confers a unique set of capacities to exercise vetoes.

This book's success, signaling what it takes to succeed in political science, amounts, I fear, to an indictment of that discipline. The problem the author takes up is a fairly simple and familiar one, which economists understand well: in any bargaining situation, if the consent of all participants is required, then each party has an implicit “veto.” This is simply a property right of the sort that any market participant possesses: I am not obliged to sell you my property at the price you offer or to pay you the price you want for your property. Instead, I can “veto” the deal.

Political institutions define and confer property rights in all sorts of settings. The nature of the right, its alienability, and the permanence of its assignment affect its value. An option is a right separated from direct ownership of an asset: I can purchase or sell the right to undertake an action. Political vetoes, in the sense of a capacity to block an initiative or action, are options of a type that economists understand well and have modeled for decades. If, for reasons determined by the property rights of an institutional arrangement, I possess the option to block you, that right has a value. I can exchange that value “in kind” for political tribute or favors in a log roll.

When first I read Veto Players, I was mystified as to why it was necessary to concoct an entirely new lexicon and to make claims for a grand unifying vision of political institutions; after all, this framework is merely a narrow application of the broader and well-established scholarship of property rights and exchange. But then I realized that I was being naive. Having been in political science departments since 1986, I should have realized that the key to success is the blunt assertion that one has discovered a new problem. If you can get away with that claim, then you have a much easier time claiming that you have a new solution. After all, if you have discovered the problem, how could anyone else have already solved it?

There are other curious omissions in Tsebelis's work. The relation between the idea of vetoes constraining win sets, on the one hand, and the importance of controlling the agenda and the “reversion point” in Thomas Romer and Howard Rosenthal's agenda-setter model, on the other, is obvious, but it receives no notice here, perhaps because Romer and Rosenthal (correctly) conceived and presented their work as a bargaining problem, one that grows out of an established tradition in economics. Giving Romer and Rosenthal the intellectual credit they deserve, then, would have required that Tsebelis relinquish his claim to innovation. (See Thomas Romer and Howard Rosenthal, “Political Resource Allocation, Controlled Agendas, and the Status Quo,” Public Choice 33 [winter 1978]: 27–43; and the same authors' “Bureaucrats vs. Voters: On Political Economy of Resource Allocation by Direct Democracy,” Quarterly Journal of Economics 93 [November 1979]: 563–87.)

My complaints about the discipline of political science notwithstanding, Tsebelis is not at fault for creating that discipline's culture, and he has written an interesting and important book. His presentation of spatial models is insightful, and his use of a unifying framework for comparing apparently different institutions is a significant achievement.

Tsebelis defines a veto player as anyone whose assent is necessary for a change in the status quo. He defines policy stability, a concept regarding the difficulty of effecting change in the status quo. He points out, following (though not citing) James Buchanan and Gordon Tullock (The Calculus of Consent: Logical Foundations of Constitutional Democracy [Ann Arbor: University of Michigan Press, 1962]), that increasing the number of veto players increases the level of policy stability. Many of these claims are conditional, of course, because the “distance” (as Tsebelis calls it) between veto players affects the outcome. Still, putting all the veto players on the same footing in a spatial context clarifies and simplifies the problem admirably.

Tsebelis nicely characterizes the position of the “agenda setter,” the agent who controls the sequence in which alternatives are considered. The general rules are that the agenda setter has less power as the number of veto players increases and more power as his ideal point comes closer to the center of the distribution of ideal points. The latter condition is not very satisfying because it equates “power” with the accident of having preferences with which others agree. Power would be defined better as changing the outcome from what it would be without agenda control. Yet Tsebelis concludes correctly that the agenda setter can preserve an outcome near the center better than he can make radical changes.

Overall, the results of the analysis are impressive. By focusing on veto players, Tsebelis can compare democratic with nondemocratic, even totalitarian, systems—perhaps the book's most important achievement, genuinely new in the study of politics. It is true that the former Soviet Union was not democratic; it is not true that it had no politics. Once we start to think in the veto-players framework, the remarkable generality of certain underlying variables (number of veto players, their positions in the space, and other constraints in the space) becomes clear.

Tsebelis also shows how to compare presidential/congressional systems with parliamentary governments. Further, he depicts issues in referenda, federal systems, and multicameral systems elegantly and clearly. A great deal of work and thought have gone into the analysis, and careful study will reward the reader with a number of insights about the political process. Although no one insight may be profound, Tsebelis makes a strong case for the utility of his approach.

The analysis of the European Union (EU) in chapter 11 is especially compelling because we have little practical idea how these institutions will work. This chapter highlights the advantage of “formal theory”: we can answer “what if” questions by building a model structure. Tsebelis's prediction is that the EU's institutions, modified by recent revisions such as the Nice Treaty, will result in greater policy stability. The consequence, perhaps unintended (but inasmuch as it involves the French, who can say?), is that much more effective power is delegated to the bureaucratic discretion of appointed officials and the courts. This chapter borders on magnificence, combining a well-written analytical history of EU institutions and some cogent predictions about the future.

The real difficulty for a book about veto players is that a normative theory, a vision of the good, is imbedded in political institutions. Recall the Polish system of Liberum Veto in the seventeenth century. All those thousands of Polish nobles thought that the option of ending a session of the Sejm and voiding all the actions it had taken was an essential part of the protection of their liberty. With hindsight, most people say that it led to their downfall because it made the government weak and ineffectual.

But I wonder. There are many ways to fall down, and having a weak government may not be the worst. One person's view of the “rigidity” of government suggests a problem that must be fixed by reform. Those who believe that government is a positive force whose power should be maximized are likely to view the action of veto players as a problem to be overcome. For the rest of us, however, the “stability” of government policy is something to cherish rather than to seek to change. Well might we wonder how different things would have turned out had John C. Calhoun's “concurrent majorities” system of veto players been implemented (see John C. Calhoun, “Disquisition on Government,” in Union and Liberty, edited by Ross Lance. [Indianapolis, Ind.: Liberty Fund, 1989]).

The key to understanding the American system is its complex and intentional array of veto players, dispersed in the policy space by the conscious choice of divergent electoral power bases. Tsebelis does a good job of illustrating the impact of veto players in the American system, but he seems to believe that this system needs reform. I hope that one impact of the book will be that scholars go on to explain why we are fortunate to have that system rather than something more responsive, less rigid, and more dangerous to the cause of liberty.