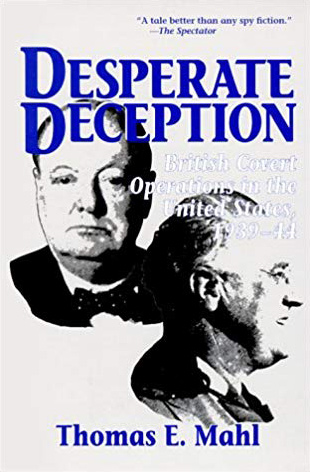 From 1939 to 1941, Americans engaged in one of the bitterest debates in their history: whether or not to aid Britain at the risk of entering World War II. Seldom had the nation been so divided. Each step taken by the Roosevelt administration brought the United States closer to war: repeal of the arms embargo in 1939, the destroyers-for-bases deal in 1940, and a host of moves in 1941, including the Lend-Lease Act, the occupation of Greenland and Iceland, the presidential order to shoot German submarines “on sight,” the arming of merchant vessels, and the removal of the ban of entry into Allied ports. Although the United States became a full-scale belligerent only with Japan’s attack on Pearl Harbor and Germany’s declaration of war, it had long been involved in an undeclared conflict.

The president’s foes argued, as did a school of postwar historians known as revisionists, that Franklin Delano Roosevelt had never leveled with the public concerning the obvious implications of his proposals. Congresswoman Clare Boothe Luce put the issue most succinctly: FDR “lied us into a war because he did not have the political courage to lead us into it.” Besides, so they claimed, the president was placing the interest of another nation, Great Britain, ahead of his own.

“Isolationists,” as Roosevelt’s opponents were simplistically and inaccurately called, always insisted that the besieged British were manipulating American policy to their advantage. The pundit H. L. Mencken accused the United States of “acting precisely like a British colony.” The New York Daily News proclaimed America “unofficially part of the British Empire.”

Certainly, from the time the great debate of 1939–1941 was launched, anti-interventionists publicized the fact that their leading foes often belonged to an Anglo-Saxon Protestant elite. With many members living in the Northeast and having been educated at Ivy League schools, that elite possessed extensive ties to Britain, practically honoring it as the “mother country.” When, for example, Sarah Delano Roosevelt, the mother of Franklin, greeted the king and queen of England at Hyde Park in 1939, she welcomed them with the words, “We are cousins.” In her published diaries, Anne Morrow Lindbergh expressed irritation at “the smart women wearing British lions conspicuously on their bosoms” (War Within and Without: Diaries and Letters, 1939–1941. New York: Harcourt Brace Jovanovich, 1980, p. 157).

Only long after the war ended, however, did tangible evidence of covert American–British collaboration come to light. H. Montgomery Hyde, a British intelligence operative during the conflict, wrote a eulogistic biography of his boss, Sir William Stephenson, the Canadian-born industrialist who ran British military operations in the Western Hemisphere (The Quiet Canadian, 1962; Amer. ed., Room 3603: The Story of the British Intelligence Center in New York during World War II). The book showed Stephenson’s intimate ties to the Roosevelt administration.

More sensational claims surfaced when in 1976 the Canadian journalist William Stevenson (no relation) came forth with A Man Called Intrepid, in which his namesake took credit for everything from a hit job on an anti-interventionist oil speculator to secretly creating such pro-British front groups as the Fight for Freedom Committee. The back cover of the paperback is scarcely less modest concerning its subject, declaring, “He masterminded the international intelligence network that halted the Nazi juggernaut.” Little wonder that George T. Eggleston, former editor of the anti-interventionist monthly Scribner’s Commentator, found in the Intrepid book evidence for what he had always suspected, namely, that the British had engineered American involvement in the war (see Roosevelt, Churchill, and World War II Opposition: A Revisionist Autobiography, 1979). Conversely, the defense analyst Mark M. Lowenthal found serious flaws in Stevenson’s volume, among them a tendency toward gross exaggeration (“INTREPID and the History of World War II,” Military Affairs 41 [April 1977]: 88–90).

In the last two decades, studies have appeared concerning the birth of the Central Intelligence Agency and its predecessor, the Office of Strategic Services (OSS). These works note the ties between “the quiet Canadian” and the flamboyant OSS director William J. Donovan; one is even titled Wild Bill and Intrepid: Bill Donovan, Bill Stephenson, and the Origins of CIA (by Thomas F. Troy, 1996). Nicholas John Cull’s study of British propaganda (Selling War: The British Campaign against American “Neutrality” in World War II, 1995, reviewed in the Fall 1996 issue of this journal) touches on Stephenson’s clandestine work. So too does Francis MacDonnell’s book on anti-subversive hysteria (Insidious Foes: The Axis Fifth Column and the American Home Front, 1995).

Now, with Thomas E. Mahl’s book, we have our fullest account of hidden British operations. Like Cull’s and MacDonnell’s books, Mahl’s study is based on a doctoral dissertation, this one completed in 1994 at Kent State University. Mahl’s archival research is extensive. British sources include the records of the Foreign Office, the H. Montgomery Hyde papers, and the manuscripts of the British publicist Eveline Mary Paterson (Lady Cotter). American collections encompass the papers of Franklin D. Roosevelt, William J. Donovan, the columnist Drew Pearson, Ernest Cuneo (ghostwriter for the sensationalist journalist Walter Winchell), and the Federal Bureau of Investigation.

Mahl clearly shows how extensive British operations were and in the process very ably illuminates the complicated network of intelligence groups and leaders. Stephenson and his British Security Coordination (BSC) established operatives in the United States on a massive scale, engaging in “dirty tricks” in order to manipulate the nation into war and, in the process, to destroy isolationism as a respectable intellectual position. Without question, as Mahl shows, the British covertly worked in tandem with such interventionist bodies as the Committee to Defend America by Aiding the Allies, Fight for Freedom, and the Irish-American Defense Association. Similarly, there was hardly an administration move, including the destroyers-for-bases deal and lend-lease, that the British did not secretly promote. They helped spearhead the federal investigation of New York congressman Hamilton Fish, who led the noninterventionists of the House, and possibly committed perjury in the process. They fabricated a “secret German map” that indicated German designs to conquer South America and that was cited by FDR in a speech given in late October 1941. They helped ghostwrite an attack on Standard Oil of New Jersey, which had entered into cartel arrangements with Germany’s I. G. Farben.

Certain names stand out. The interventionist columnist Dorothy Thompson frequently met with British intelligence officials. Another columnist, Walter Lippmann, advised the British to initiate surreptitious operations against anti-interventionists. Walter Winchell’s scriptwriter, Ernest Cuneo, was fed data by the British operative Sandy Griffith, who also engineered stacked polling at conventions of the American Legion and the Congress of Industrial Organizations. Several New York Times correspondents, among them James Reston, were fed material by British intelligence. For the first time, the Rockefellers come to the fore. The family gave the BSC rent-free space in Rockefeller Center and helped subsidize Fight for Freedom. Holding the post of coordinator of inter-American affairs, Nelson Rockefeller aided British intelligence in Latin America.

The book is marred by careless errors. Misspellings abound, including the names of William Dudley Pelley, Allan Nevins, Arthur Hays Sulzberger, Eugene Roseboom, and Henry Morgenthau. Senator J. Bennett Clark is really Bennett Champ Clark. (Worst of all, the first name of this reviewer is misspelled on five separate occasions.)

At times language is sloppy and polemical. Pollster Elmo Roper is a “Henry Luce minion.” Dies committee investigator J. B. Matthews, admittedly a volatile figure in the world of ideological combat, is three times referred to as a drunk.

More significant, there is hardly an interventionist group that Mahl does not label a “British interventionist front,” basing his claim on a boast of British operations officer Sidney (Bill) Morrell. Similarly, prominent interventionists who cooperated with British operatives are portrayed as their instrument, and Mahl writes without inhibition that the New York Herald Tribune was “a tool of British intelligence” (p. 157). Certainly innuendo is clear in a sentence that reads: “[John J.] Pershing’s eloquent speech was written for him by Walter Lippmann, who was working with British intelligence and had pressed so hard for [Wendell] Willkie.” The British underground officer Richard Ellis might have been influential in the OSS, but one doubts whether he at any time actually ran the agency. Some public opinion polls were manipulated, if in no other way than the framing of the questions, and Mahl shows that some polling agencies had ardently pro-British staffers. It was, however, certainly unlikely that “all” the major published polls were “under the influence of British intelligence, its friends, employees, and agents” (p. 69).

Some contrary facts are not taken into account. If female British agents seduced Senator Arthur H. Vandenberg in hopes of converting him to interventionism, they were not entirely successful, for all during 1941 he continued to speak and vote against FDR’s proposals. One could agree with Mahl that Americans were deprived of a genuine choice in the 1940 presidential election, for Republican candidate Willkie was as interventionist as Roosevelt. The GOP standard-bearer, however, was not above pandering to anti-interventionist sentiment, as witnessed by his claim that a Democratic victory would lead to full-scale American belligerency within six months. The Cull study, mentioned earlier, shows that British propaganda efforts were severely weakened by bureaucratic rivalries, thus many efforts were highly ineffective.

Mahl does not does shy away from presenting a conspiratorial view. In fact, he asks,

How does the historian avoid the charge he is indulging in conspiracy theory when he explores the activities of a thousand people, occupying two floors of Rockefeller Center, in their efforts to involve the United States in a major war? What should we properly call the rigging of a public opinion poll, the planting of a lover, or a fraudulent letter by an intelligence agency in order to gain information or influence policy? (p. xi)

Certainly the British were involved in secret efforts, some of which were worse than shady. Anyone who worries about the health of a democracy cannot but be disturbed when any foreign power surreptitiously plays such a significant role in molding opinion and manipulating policy. At the same time, Mahl is wrong in his implicit assumption that the British played the crucial role in energizing American intervention, that most prominent FDR backers he discusses were little more than British puppets, and that Roosevelt’s policies usually lacked the support of his countrymen. Some line of distinction must be drawn between interventionist moves plotted by the British and those fostered by Americans on their own. By his overstatements Mahl mars what could have been a superb study.

Justus D. Doenecke
New College of the University of South Florida
Defense and Foreign PolicyEuropeGovernment and PoliticsInternational Economics and DevelopmentPolitical History
Subscribe Buy This Issue Get the App