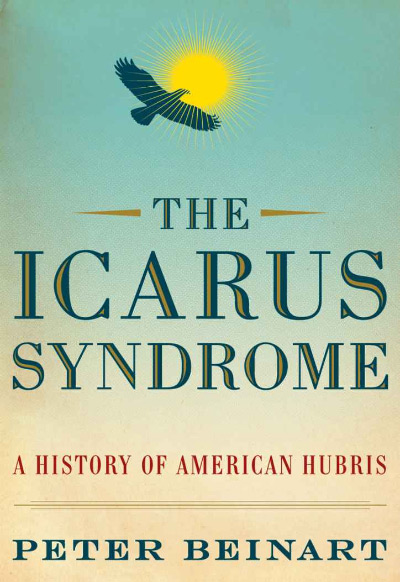 The Icarus Syndrome
A History of American Hubris
Peter Beinart
Kindle Hardcover Paperback Audiobook
This book review appeared in the Winter 2010/11 issue of The Independent Review.

Peter Beinart—formerly an editor at The New Republic and currently a senior fellow at the New America Foundation and associate professor of journalism and political science at City University of New York—has undertaken a detailed interpretation of U.S. foreign policy since the Progressive Era. He argues in The Icarus Syndrome: A History of American Hubris that America’s rise to global power has been accompanied by an expanding hubris that has evolved through three phases: reason, toughness, and dominance, represented most saliently in the presidencies of Woodrow Wilson, Lyndon B. Johnson, and George W. Bush, respectively. One may object that the three-phase approach has a bit of the procrustean to it, but here it serves as a useful framework for Beinart’s nuanced analysis of the interplay of events, intellectual currents, and public policy over the past one hundred years.

Beinart presents Wilson as a paragon of the Progressive Era’s faith in reason and expertise. Thus, although the European people greetedWilson with enthusiasm, their leaders at the Paris Peace Conference found him presumptuous and disconnected from the realities of the power-politics game that they played. In the meantime on the domestic front, Wilson’s political and intellectual allies began to desert him, and his efforts to rationalize the international scene and impose a scientific peace ended in failure. For much of the next two decades, however, American leaders, to the undisguised disgust of their French counterparts, continued to think in terms of the abstract claims of human rights, peace, and justice. This hubris of reason finally began to dissolve under Franklin D. Roosevelt, who adhered publicly to these claims but understood fairly well the practicalities of power politics.

In the post–World War II era, George F. Kennan was the thinker who moved to the forefront in terms of a clear understanding of international politics and America’s appropriate role therein. For Beinart, Kennan’s personal experience with the enemy—in this case with the Soviet Union—his intellect, and his sense of the limitations of U.S. power are the model attributes of any effective maker of foreign policy. Kennan’s famous essay on containment provided an immediate rationale for President Harry Truman’s efforts to thwart Communist inroads after World War II and might have been a useful basis for presidential policy thereafter. However, to Kennan’s and Beinart’s dismay, the goal of containment became transmogrified from the realm of diplomacy into largely the realm of the military and was extended far beyond regions and conflicts of important national interest. Beinart sees the post–World War II era as fostering an ethic of toughness, a hubris that President Dwight Eisenhower for a time was able to deflect by scrupulously avoiding the commitment of U.S. troops to foreign conflicts.

Despite Eisenhower’s efforts, however, Beinart believes that intellectuals and policymakers were becoming increasingly restive in reaction against what they perceived as his passivity in foreign affairs. Partly in response to this mood, President John F. Kennedy adopted a more activist, aggressive posture. Beinart depicts him as a bureaucratic neophyte drawn into a “conceptual prison” (p. 160) of toughness, a prison that his successor found even more confining and frustrating with the advent of the Vietnam War. Lyndon Johnson’s boast that “[w]e can do it all” (p. 166) serves as the ultimate tragic comment on this stage of U.S. hubris.

President Richard Nixon continued the toughness rhetoric while trying diligently to extricate troops from Vietnam and negotiate with China. However, it remained for Ronald Reagan to perform the “last rites” (p. 219) for the hubris of toughness with a finesse that leaves Beinart somewhat astonished. Reagan talked tough, but for the most part he was careful not to employ troops where they would suffer heavy losses or remain in a lengthy engagement. Moreover, as in Lebanon, he did not hesitate to withdraw when either of these outcomes was a possibility. At the same time, his “almost surreal optimism” (p. 221) about human nature and the inevitable demise of the Soviet regime enabled him to negotiate constructively with Mikhail Gorbachev, which in turn allowed Gorbachev to deal more effectively with his domestic problems and hard-liners.

Although President Bill Clinton fumbled about early in his presidency, his successful use of the military in the Balkans with minimal U.S. losses reinforced the wisdom of the Reagan approach. But instead of accepting the value of limited successes, pundits and policymakers began to believe that military technology was making U.S. power overwhelming and with it American democratic ideology. Moreover, the United States was spending more on the military than the next nine nations combined and still managing an occasional budget surplus. Despite warnings from people such as Jeane Kirkpatrick and Irving Kristol about the bounds of U.S. power and the limited popular appeal of American ideological premises in other cultures, a new breed of thinkers—which included conservatives and, later, liberal hawks—was pushing the “national greatness” theme in foreign policy. Francis Fukuyama’s essay on the end of history (“The End of History?” The National Interest [Summer 1989]: 3–18) and the triumph of democratic ideology was especially influential in this respect at this time. Kirkpatrick and Kristol were particularly concerned that they were witnessing the appearance of one of their greatest fears—the emergence of a coterie of intellectuals possessed of a “messianic vision” (p. 308). Beinart asserts that by the end of the 1990s a network of intellectuals and potential policymakers dedicated to the idea of American world supremacy had formed.

The events of September 11, 2001, provided a unique opportunity for the proponents of American greatness. Those in George W. Bush’s administration who had been sympathetic to the assumptions of the Project for the New American Century articulated in the 1990s saw these attacks as the chance to establish U.S. dominance in the Middle East, and they were initially rewarded with success in Afghanistan. Despite the concerns expressed by Secretary of State Colin Powell, who was increasingly marginalized by “bureaucratic sharks” (p. 319) such as Defense Secretary Donald Rumsfeld, the Bush administration moved to the invasion of Iraq and the removal of Saddam Hussein. But the hubris of dominance unraveled as U.S. troops suffered serious losses that eroded the ideological, economic, and military confidence that had motivated President Bush to sanction the invasion. Beinart does not accuse Bush of duplicity, but he does think that Bush’s belief in the democratic justness of his cause placed him on a different page from the likes of Vice President Richard Cheney and Rumsfeld, whose primary interest was simply the extension of U.S. power. Despite the success of the “surge” in Iraq, Beinart is convinced that the U.S. experience there has seriously weakened the hubris of dominance. U.S. leaders, for the most part, now recognize that the use of the military—despite its remarkable technological sophistication—cannot establish U.S. dominance throughout the world, a point that Kennan made many years ago.

For Beinart, the history of U.S. foreign policy since the Wilson administration has consistently demonstrated the frustrations and, indeed, the tragedies of leaders imbued with an exaggerated sense of virtue and power. But unlike Icarus, whose exercise of hubris led to his fatal plunge into the sea, the United States retains many strengths and resources. Beinart urges President Barack Obama to refocus on America’s domestic needs and to reinstate a stance of humility in foreign affairs. For the good of the nation and the world, the president’s decisions must be based on a realistic comprehension of the limits of U.S. power, even though America’s optimism, as contrasted with its hubris, remains “one of the great wonders of the world” (p. 390).

Although one might quibble with some of Beinart’s cultural generalizations and psychological portraits, he has for the most part done an excellent job of explaining the assumptions and direction of U.S. foreign policy. His book has value because, besides being informative, it opens new perspectives and avenues for discussion. Two areas in particular seem to beg for further examination. First, Beinart notes the huge portion of the federal budget now devoted to the military. These expenditures have extended roots deep into U.S. industry and society. The author might now contribute even more to the discussion of foreign policy if he focused his considerable talents on the question of whether it is still possible to disentangle the budget from those relationships that are heavily vested in a growing military. Second, as the proponents of national greatness have distributed U.S. troops and bodies around the globe, they have in fact undermined America’s relative position in the world. Today a weakened economy and large military expenditures have forced the U.S. government to rely heavily on foreign investment to the extent that, as Beinart notes, Chinese “forbearance” (p. 375), for example, is now necessary. His analysis certainly supports the conclusion that as the hubris of dominance has been playing out inside the Washington beltway, the Chinese have utilized their trading and financial positions to move toward economic parity with America. And they have lost very few troops in doing so.