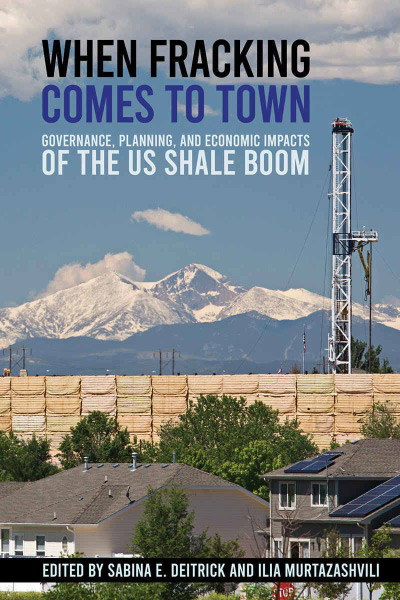 When Fracking Comes to Town
Governance, Planning, and Economic Impacts of the U.S. Shale Boom
By Sabina Deitrick and Ilia Murtazashvili
Kindle Hardcover Paperback
This book review appeared in the Fall 2022 issue of The Independent Review.

This is a volume of case studies that addresses the localized impact of fracking externalities and the ways in which governments address them. I provide some general initial observations before discussing the book specifically.

First, there is a bias in the way in which fracking has been examined in academic journals, the media, and politics. This background likely affects even the authors and their chapters in this volume, an issue that the editors do not address.

For many, fracking has been the enemy of the good. That is, it has freed up hydrocarbons, just at a time when climate change mitigation advocates have argued that the United States should be moving away from them. Wind and solar power sources are offered as alternatives. Low-cost natural gas has made this policy prescription more difficult. As a counter, national, state, and local politicians in some places have supported policies to ban hydrocarbons in energy use and to raise the costs of production. Indeed, academics and policy makers often have called for leaving hydrocarbons in the ground. These calls, of course, are by individuals who do not bear the costs of their policy prescriptions. Mineral lease holders bear direct costs, as do the communities that would be benefited by resource exploitation, as well as, likely, the overall economy. One cannot find a case in economic history or successful development where a society has knowingly, voluntarily given up vast resource endowments. The argument is even more challenging when such sacrifice is made in order to provide a global public good, where the benefits can be internalized by each country only in a very limited manner. The current evidence is that climate change differentially spreads globally, with some areas harmed and others benefited. Moreover, the costs of shifting from low-cost hydrocarbons to higher-cost alternatives or of changing consumption patterns are differentially imposed across countries, with the poorest ones affected most. Further, mitigation requires coordination among all major emitting and hydrocarbon-producing countries. When costs and benefits are unequally spread, such international cooperation seems unlikely. Despite all of this, U.S. fracking remains a negative for climate change mitigation among many commentators.

Second, in discussions of fracking, terms are not defined in an operational manner. Sustainability, as opposed to boom-and-bust development, is referenced repeatedly as a goal that is not achievable with fracking. But sustainability is never defined. It is a static, engineering concept, not an economic one. Nonrenewable resources can never be exploited in a “sustainable” way. Boom-and-bust cycles are noted as characteristic of the Dutch disease, whereby long-term costs overwhelm short-term benefits. There is no analysis of why or when fracking would inflict net losses. Sustainability is a fashionable term, but absent definition and systematic assessment, it is not obvious when it might be economically or socially beneficial.

Third, the externalities associated with fracking, central to the regulatory arrangements addressed in the volume, are never articulated. By breaking geological structures, injecting water, and inducing the release of natural gas, fracking can be associated with groundwater contamination and localized earthquakes. Associated development leads to dust and other production contaminants and congestion—and abandoned wells remain as sores, releasing damaging chemicals into the environment. These external effects are held as harmful to health, property values, and the quality of life in adjacent communities. Taxes, bonding, and various regulatory controls are described, to internalize costs. Although plausible, there is no discussion of the extent and distribution of externalities or of how they stack up to economic gains from fracking. The title of the volume, When Fracking Comes to Town, implies that fracking and urban populations do not mix. But where and under what conditions? The cases suggest that fracking has been most common in rural areas of Wyoming, Oklahoma, North Dakota, Pennsylvania, and Texas, already suffering from economic and social decline. Has fracking been on net a benefit in those areas, or has it added yet one more cost?

Fourth, the baseline alternative is never presented. The implication is that the negative externalities from fracking leave communities worse off than they otherwise might have been. Is that the case? The repeated notions of a lack of sustainability, of boom-and-bust, and of damaging environmental effects suggest that fracking reduces local welfare. Are there no positives from the wealth generated and the associated increased tax revenues, employment, higher property values, or education and healthcare investments? Why might these not generate longer-term net gains, and if they do not, under what circumstances?

Finally, no political models are presented. If fracking inherently inflicts negative externalities under certain circumstances, when will it be addressed via the political and regulatory process? What are the distributional effects of regulation? Analytical models are important because they can generate testable hypotheses for analysis.

Turning to the volume, the introduction and conclusion by Sabina Deitrick and Ilia Murtazashvili are well-written summary overviews, but they do not address the issues raised above or provide additional analysis. Chapter 1, by Murtazashvili and Ennio Piano, places the shale boom into historical perspective with comparisons to nineteenth-century western mining camps. Nineteenth-century mining involved nonrenewable resources and boom-and-bust cycles. None of the studies referenced in the chapter, however, address long-term net gains. The authors do not examine those issues or whether fracking is somehow different in externalities from hard-rock mining development. Chapter 2, by Heidi Gorovitz Robertson, begins the discussion of local government responses to fracking with a focus on the Marcellus Shale regions of New York, Ohio, and Pennsylvania. The chapter also describes state legislative and judicial actions, as well as local environmental regulations. Absent discussion of externalities, benefits and costs, or political models, it is difficult to know what motivations were behind these governance issues. Chapter 3, by Ann Eisenberg, asserts that fracking and the legal framework within which it takes place disadvantage the poor. She links fracking to historical coal-based production as having similar negative consequences. Without defining environmental injustice or baseline alternatives in a tractable manner or providing a testable framework for analysis, it is hard to assess her claims. The essays in chapters 4 through 8, by Pamela Mischen and Joseph Palka; Adelyn Hall and Carla Chifos; Teresa Cordova; Sabina Deitrick and Rebecca Matsco; and Anna Osland and Carolyn Loh, explore local tradeoffs in fracking. Their usefulness, however, is weakened by the lack of a definition of externality, of a clear statement of local tradeoffs, or of the types of regulatory interventions that could be of use. Although public opinion surveys are usefully presented in chapter 4 for parts of Pennsylvania, with results underscoring problems of road congestion and deterioration due to fracking, offsetting benefits are not obviously captured in the surveys. Boom-and-bust models are presented for Bradford County, Pennsylvania, in chapter 5. These are descriptive, rather than analytical. What are the trade-offs and how might local governments address these cycles? Boom-town discussion continues in chapter 6 for North Dakota. The narrative emphasizes that planning to address externalities is a real challenge, a very reasonable argument. The question arises: Why and how might benefits and costs be addressed via the political process? It is worth pointing out that the counties of western North Dakota most affected had previously declining populations, starting in the early twentieth century. Somewhat similar local planning issues are addressed in chapter 7. Chapter 8 assesses economic gains relative to negative external costs. The authors assert that short-term gains in terms of job creation may be overstated, and that long-term harms are feasible. There is a call for planners to be more active in the process. Without more information on the flow of benefits and costs and the distributional effects associated with them, it is hard to know when planning might be beneficial on net.

Part III of the volume, with chapters 9 through 13 by Frederick Tannery and Larry McCarthy; Erik Pages, Martin Romitti, and Mark White; Nicholas McClure, Ion Simonides, and Jeremy Weber; Gavin Roberts and Sandeep Kumar Rangaraju; and Max Harleman, addresses the economic impacts of fracking. Chapter 9 provides a valuable analysis of the wage and employment growth in rural counties in Pennsylvania arising during the fracking boom. The benefits arise from gas exploration and production, construction for infrastructure and housing, and spinoffs from greater expenditures stimulated by higher incomes and employment. These gains are not found in neighboring counties where fracking did not occur. The chapter is the most quantitative in the volume. Despite these gains, the authors conjecture that environmental costs could far exceed the direct economic gains. There is no discussion, however, of environmental costs or of how their magnitude might offset documented economic gains. The ability of communities in northwest Pennsylvania to build on fracking is narrated in chapter 10. Negatives, however, return in chapters 11 and 13, where cleanup costs following a fracking boom are addressed. These chapters usefully describe bonding requirements in western Pennsylvania as a method of addressing the costs of well abandonment and explore the size of bonding and the links to reclamation costs. The issue would be the standard for reclamation imposed by the bonding mandate. Chapter 12 shifts attention to Wyoming, where the authors describe overall economic gains from job creation, higher royalties, and lower energy costs.

All in all, the editors are to be commended for bringing together a diverse group of people, including some from local governments, as well as academics, to address the fracking phenomenon. The issues raised regarding the boom-and-bust phenomena and the roles of governments in addressing potential economic net losses in some areas are useful ones. The discussion raises valuable points that would have been enhanced by more analysis. Even so, fracking, which seems to be on the wane, has been a major entrepreneurial development in hydrocarbon production. It has brought local benefits and costs to rural areas that otherwise might not have had such impacts. Whether or not on net these areas have been made better off and what the broader lessons might be remain for further analysis. By briefly examining many of the regions across the country, the authors of the volume provide an overview that is not typically available.

Gary D. Libecap
University of California, Santa Barbara
EnergyEnergy and the EnvironmentEnvironmental Law and Regulation
Subscribe Buy This Issue Get the App