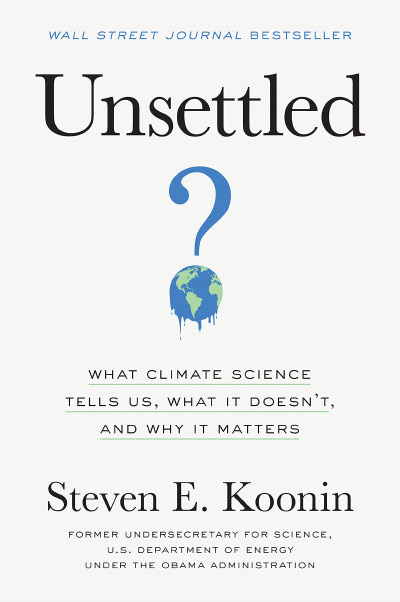 Unsettled?
What Climate Science Tells Us, What It Doesn’t, and Why It Matters
By Steven E. Koonin
Kindle Hardcover Audiobook
This book review is a web exclusive for the Winter 2021/22 issue of The Independent Review.

In the last three years, I have reviewed eight books related to climate change for The Independent Review. Some have been quite good (including Bjorn Lomborg’s False Alarm, William Nordhaus’s The Spirit of Green, Michael Shellenberger’s Apocalypse Never, Matthew Kahn’s Adapting to Climate Change, and Adapt and Be Adept edited by Terry Anderson—which I adopted for class). But this one, by theoretical physicist Steven Koonin, is probably the best.

Koonin has been a professor at Cal Tech and NYU and served as Undersecretary for Science in the U.S. Department of Energy under President Obama, where he “helped guide the government’s investments in energy technologies and climate science” and “found great satisfaction in these roles, helping to define and catalyze actions that would reduce carbon dioxide emissions, the agreed-upon imperative that would ‘save the planet’” (p. 3). Koonin was asked by the American Physical Society to lead an update of its public statement on climate in 2013, and convened a workshop designed to “stress test” the state of climate science—“analyzing, critiquing, and summarizing humanity’s accumulated knowledge about the past, present, and future of the earth’s climate” (p. 3).

That’s when the doubts began.

Koonin came away from the workshop “shaken by the realization that climate science was far less mature” than he had supposed. He concluded that the “deficiencies of climate data challenge our ability to untangle the response to human influences from poorly understood natural changes.” He concluded that “the results of climate models disagree with, or even contradict, each other and many kinds of observations,” so a “vague ‘expert judgment’ [is] sometimes applied to adjust model results and obfuscate shortcomings.” Most importantly, he noticed that U.S. government and UN press releases and summaries often do not accurately reflect the principal scientific reports. “Distinguished climate experts (including report authors themselves) are embarrassed by some media portrayals of the science” but are unwilling to speak up (p. 4).

A 2019 report by the American Association for the Advancement of Science is typical. It summarizes the 2018 National Climate Assessment this way:

Our nation, our states, our cities and our towns face an urgent problem: climate change. Americans are already feeling its effects and will continue to do so in the coming decades. Rising temperatures will impact farmers in their fields and transit riders in cities. Across the country, extreme weather events such as hurricanes, floods, wildfires and droughts are occurring with greater frequency and intensity. While these problems pose numerous risks to society and the planet, undoubtedly the biggest risk would be to do nothing. Science tells us that the sooner we response to climate change, the lower the risks and the costs will be in the future. (p. 23)

Based on his familiarity with the assessment reports and the scientific literature—ably demonstrated throughout the book—Koonin would have offered this alternative summary.

The earth has warmed during the past century, partly because of natural phenomena and partly in response to human influences. These human influences (most importantly the accumulation of CO2 from burning fossil fuels) exert a physically small effect on the complex climate system. Unfortunately, our limited observations and understanding are insufficient to usefully quantify either how the climate will respond to human influences or how it varies naturally. However, even as human influences have increased almost fivefold since 1950 and the globe has warmed modestly, most severe weather phenomena remain within past variability. Projections of future climate and weather events rely on models demonstrably unfit for the purpose. (p. 24)

You may want to print out Koonin’s paragraph and quote it to your students, colleagues, and even strangers.

Koonin buttresses this summary in the remainder of this immensely informative book. After an invaluable chapter on how climate models work (or don’t), Koonin provides core chapters on what the data actually reveal about temperature, storms, precipitation, wildfires, and sea level changes.

Koonin explains how climate physicists begin with a three-dimensional grid of the earth’s atmosphere—typically ten to twenty layers of grid boxes stacked above a surface grid of squares that are usually 100 kilometers by 100 kilometers, along with 10 km by 10 km grids and up to thirty layers covering the oceans. “Grid in place, the computer models use the fundamental laws of physics to calculate how air, water, and energy in each box at a given time move to neighboring grid boxes...Repeating this process millions of times over simulates the climate for a century” (p. 80). But “anyone who says that climate models are ‘just physics’ either doesn’t understand them or is being deliberately misleading....While modelers base their subgrid assumptions upon both physical laws and observations of weather phenomena, there is still considerable judgment involved. And since different modelers will make different assumptions, results can vary widely among models” (p. 81). “Even with the grid, the basic physics, the subgrid assumptions, and initialization in hand, we’re still not ready to generate a useful climate simulation. The last remaining step is to ‘tune’ the model....Although ‘tuning’ sounds like a minor detail...[it’s] a process of adjusting the model to deal with troublesome inconsistencies or paper over irksome uncertainties” (p. 84). Ultimately, “it is impossible—for both practical and fundamental reasons—to tune the dozens of parameters so that the model matches the far more numerous observed properties of the climate system. Not only does this cast doubt on whether the conclusions of the models can be trusted, it makes it clear that we don’t understand features of the climate to anywhere near the level of specificity required given the smallness of human influences” (pp. 84-85). If you are willing to trust the models, the tuning and the complex feedback effects, you should beware that a paper laying out the details of one of the most respected models tells of tuning a parameter related to convection in the atmosphere by a factor of ten because the originally chosen value resulted in twice as much warming as had been observed. As Koonin puts it: “Changing a subgrid parameter by a factor of ten from what you thought it was—that’s really dialing the knob” (p. 86). An Achilles Heel is that these models fail to reproduce the strong warming observed from 1910 to 1940.

Most readers cannot have a clue whether or not the predictions of climate models are worth their salt, but they can examine widely-available climate data to get a good sense of actual climate trends. Alas, these rather benign trends are in the Intergovernmental Panel on Climate Change’s reports, but don’t often get reported by the media. The IPCC summarizes that there is “low confidence regarding the sign of trend in the magnitudes and/or frequency of floods on a global scale.” It has “low confidence in a global-scale observed trend in drought or dryness...since the middle of the 20th century.” It has “low confidence in trends in small-scale severe weather phenomena such as hail and thunderstorms.” It reports that “confidence in large scale changes in the intensity of extreme extratropical cyclones...since 1900 is low” (p. 98). In other words, the IPCC itself has little confidence that climate is worsening in terms of floods, drought, storms and hurricanes—which are among the worst of our climate worries. It’s also interesting to note that the average extent of snow cover in the northern hemisphere has held constant around 25 million square kilometers over the past half century.

However, Koonin goes beyond merely repeating these key findings. He also debunks claims that record high temperatures in the United States have become more common. When the U.S. Global Change Research Program reports that “record warm daily temperatures are occurring more often,” Koonin shows that what they really mean is that “record warm daily temperatures are occurring more often compared to record cold temperatures” (p. 107, emphasis added). Using weather station data, he demonstrates that both all-time lows and all-time highs (covering the period from 1895 to the present) are becoming rarer. Rather, the greatest number of record highs and lows date from first half of the twentieth century. Our climate has become milder.

A later chapter demonstrates that global weather-related deaths—from drought, floods, storms and extreme temperatures—are eighty times less frequent now than one hundred years ago. During the past four decades the Leaf Area Index (the fractional area covered by leaves) observed by satellites has significantly increased over 25 to 50 percent of the vegetated areas of the globe, while it has decreased over less than 4 percent of the globe. And, as most economists know, yields per acre have doubled or more than doubled for wheat, rice and corn since 1960.

But these facts don’t get much press. If it bleeds, it leads. If it scares, it snares. And snaring the reader with bad news or bad non-news is what drives modern media.

Koonin takes his fellow scientists to task for withholding the information he presents in this book. Ironically, most of the data he reports comes directly from the very reports that are used to exaggerate the problems we face. This scientific malpractice seems mainly driven by self-interest—more funds will go to climate scientists if they exaggerate and mislead and many are afraid that they will be shunned by colleagues if they break the code of silence.

Because of this, it is time confront the true climate deniers.