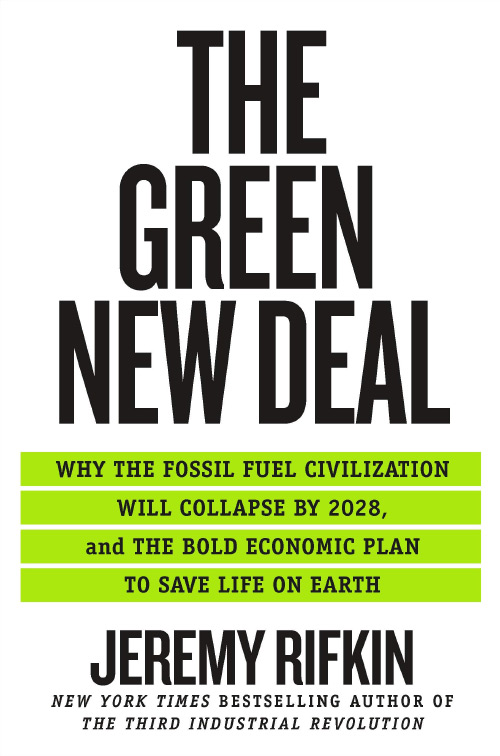 The Green New Deal
Why Fossil Fuel Civilization Will Collapse by 2028 and the Bold Economic Plan to Save Life on Earth
Jeremy Rifkin
Kindle Hardcover Paperback Audiobook
This book review is a web exclusive for the Winter 2019/20 issue of The Independent Review.

Jeremy Rifkin’s latest book, The Green New Deal, focuses on the world’s rapidly changing energy economy and how carbon-involved environmental tragedies can be avoided. President of the Foundation on Economic Trends, with several worldwide offices, Rifkin, by his own account, is intensely involved in discussions with top political leaders in Germany, which he sees as the model for hasty transition to the new energy economy, the United Kingdom, European Union, and China. As a result of this involvement, the book is helpfully filled with detailed discussions of policy-rich conversations and events that help to enrich and flesh out his story.

The book’s title is guaranteed to resonate with the rich cross section of environmentalists and progressives who believe climate change threatens life as we know it, and that solutions to such serious problems can only be addressed with top-down command-and-control regulatory actions. This coalition has already helped to install related planks in the platforms of aspiring Democratic presidential candidates and has sponsored legislation bearing the book’s name. However, there is also something here for those who believe market forces can lead to beneficial outcomes, because Rifkin, maybe somewhat begrudgingly, indicates that the market is already leading to a beneficial outcome. As he puts it “the market is a guardian angel looking over humanity” (p. 222)

But if the title is not enough to grab attention, the book’s Armageddon-sounding subtitle will surely do so: Why the Fossil Fuel Civilization Will Collapse by 2028, and the Bold Economic Plan to Save Life on Earth! This sounds like a National Inquirer check-out line thriller, doesn’t it? Trust me, the book is not a polemic, though it surely reflects a normative view of how the world should work. Still, I recommend the book to all who wish to stay informed about political and economic forces that seem to be shaping future institutions that will regulate how we live.

Noting uncritically that the words in the title relate to “America’s greatest public works project,” Rifkin provides an interesting narrative on how and “where the Green New Deal got is legs.” (p. 48). (I note that it borders on being amazing that a much-respected scholar would speak of Franklin Roosevelt’s New Deal uncritically or without noting, even in a footnote, that the FDR program’s overall success cannot be judged in terms of ending the Great Depression, let alone providing new energy to the U.S. economy. But the program may be judged successful by those who believe that economic life can best be managed with a heavy dose of top-down government direction, what some call socialism.)

Paradoxically, as he puts it, though FDR inspired, the book’s title is European in origin, a 2009 development of Germany’s Green Party as a heading for its efforts to bring together the EU and U.S. to advance a post-carbon economy. This effort, which involved white papers and conferences, was dedicated to building a game plan for the 2009 Copenhagen Climate Summit, which was intended to be a time for the display of triumphant policy leadership by the Obama Administration in gaining a world agreement to cut back carbon emissions. Sadly for those who expected a lot, the Copenhagen effort came off like a lead balloon that never got off the ground. Rifkin makes no mention of the conference’s failure but goes on to explain how the phrase “Green New Deal” became a term of art to be found in report titles and initiatives put forward by the EU, UN, South Korea and various political movements, including the efforts initiated by newly-elected congressional representative Alexandria Ocasio-Cortez (p. 50). I note that in 2009 Jody Lipford and I were focusing on the relationship between multi-country GDP growth rates and the time when stricter environmental regulation would be embraced, the so-called Environmental Kuznets Curve relationship (Jody W. Lipford and Bruce Yandle. 2010. “Not the Time to Cap and Trade.” Regulation. Vol. 32, No. 4, Winter 2009/10: 3). Our work indicated that China was at a point to embrace a global carbon reduction agreement, which is what happened.

Rifkin’s decidedly well-written book sets forth his carefully constructed, though not always compelling, argument that a new zero-carbon energy economy is emerging, one that will be accompanied by vast employment and economic growth opportunities but also serious transition difficulties encountered by owners of and stakeholders in existing fossil fuel energy infrastructure. Drawing on his past efforts to portray a third industrial revolution that is now underway, Rifkin presents some of the book’s best work (pp. 52–61). I note that the other two revolutions are the eighteenth-century British-initiated steam engine driven revolution and the late nineteenth-century American-inspired petroleum and electricity revolution.

Here we find analytically strong discussions of potentially rapid expansion of decentralized wind and solar power generation, falling prices, and the difficulties to be encountered by U.S. and other investor as well as publicly-owned electricity producers. Assuming the electricity economy expands as Rifkin thinks it will—largely based on movement to electric automobiles—and that decentralized solar and wind-based generation continues to encounter falling costs and therefore lower prices, then when the tipping point might come and how to deal with stranded assets—e.g., coal-fired generators that are no longer competitive—becomes the chief challenges.

Rifkin’s review of related studies suggests that the marginal shift to zero carbon electricity production could come as soon as 2023 or as late as 2035. As to why lower relative costs will bring change, he points out that in 1977 “the fixed cost per watt” of solar cells was $76 while today it is $0.50; that solar generated power is being purchased for 2.42 cents per kilowatt hour (KWH); and wind energy is being generated for a cost of 3 to 4 cents per KWH (p. 56). I note that the U.S. Energy Information Agency indicates that in 2018, the average cost per KWH of coal-fired generated electricity was 3.58 cents and of nuclear generated power, 2.38 cents.

However, Rifkin’s key point is that without redevelopment of the power grid for accepting and distributing power from a vast number of newly decentralized generators, e.g., most U.S. homes that become solar powered, the new power economy will be stymied. Furthermore, the longer the delay, the greater the reinvestment in the old carbon-based electricity generating system. Thus, the stranded cost hazard rears its ugly head (p. 113). With the stranded costs prospects comes a revaluation of the relative investment attractiveness of existing petroleum- and coal-fired electricity producers (140).

With appropriate political and industrial leadership, as described by Rifkin, this rapidly forming highly decentralized energy economy that relies on the wind, sun, batteries and hydrogen for producing, storing and distributing lower-cost electricity can evolve, but doing so will not come easily.

To illustrate how this third industrial revolution may take off, he describes policy discussions that took place in China, Texas, and the EU (105). In these discussions, where key politicians and industry leaders agree with Rifkin’s third revolution thesis, some actions or serious plans to accommodate power generation decentralization are already underway. The actions include taking steps to build new power grid infrastructure and also to develop renewable internets that connect power sources together in a management information system that will accommodate the buying and selling of electricity from a vast number of multiple sources (p. 106). As Rifkin points out, the new world that he believes is forming turns Karl Marx on his head. That world will be powered by workers who will hold title to their own little electricity generator that will be sending power into markets worldwide. Ultimately, Rifkin is convinced that “the collapse of the fossil fuel civilization is inevitable, despite any efforts of the fossil fuel industries to forestall it. Why? He argues that “market forces are far more powerful than whatever lobbying maneuvers the fossil fuel industry might entertain” (p. 222).

Rifkin recognizes that today’s federal regulatory institutions will become unhelpful dinosaurs when it comes to accommodating the needs of the third industrial revolution. After all, U.S. electricity prices are regulated independently at the state level and producer/distributors include thousands of local, state, and regional producers. He is deeply concerned that the new world he thinks is evolving will be a sharing economy where perhaps millions of producing solar power units and wind power communities will be engaged in a dynamic market setting. As a result, he spells out 23 actions that should be taken by federal, state, and local governments to hasten the day when the new energy economy is operational. These include developing tax credits for rapid development of zero-carbon electricity production as well as for electric vehicles and charging stations, a national green bank for financing carbon-free projects, as well as federal programs to encourage farmers to enhance their use of low-carbon agricultural techniques. In short, there is plenty here for policy wonks to tear into. He also calls for another form of government for coordinating the micro-producers, which he terms Peer Assembly Governance. These will be regionally defined groups that will operate much like co-ops as they coordinate activities in the new markets. What we do not find are what are termed no-regrets policy suggestions, ideas that might be net beneficial even if the much-discussed climate change collapse does not emerge. From my standpoint, these might include 1) cutting capital gains taxes to zero, to hasten deployment of new capital, 2) eliminating all forms of energy subsidies, so that economic agents would be aware of the real cost of their actions, and 3) opening the doors wider for immigration of people and capital, so that climate-change migration might be better accommodated.

But while Rifkin gives the reader plenty to think about as he paints the landscape of a possible future electric economy, he does so without directly paying attention to lessons learned from Public Choice economics, though he, at times, recognizes some related difficulties. Indeed, the prevailing mindset we find displayed is one that agrees with the Public Interest theory of government, the theory that sees representative government in the most positive light, one where elected officials are seen as always attempting to serve the broad public interest, not as agents who seek to serve the private interests that help them to remain in their jobs.

This becomes most concerning when considering his 23 recommended actions where any one of them, if attempted, would induce car loads of lobbyists and other rent seekers to enter the fray. This is not to say that considering what might be called pure public interest recommendations is a waste of time. It is not. But it is to say that history tells us that large scale electricity production and related energy sources have often called the tune when regulatory reforms have been attempted. As a result, all reform efforts seem to have resulted in more regulation, larger regulatory agencies, and enlarged arenas for rent seekers to explore while working the regulatory commons. I wish Rifkin had written one more chapter titled “What the Third Industrial Revolution Will Look Like after the Rent Seekers Have Entered.”