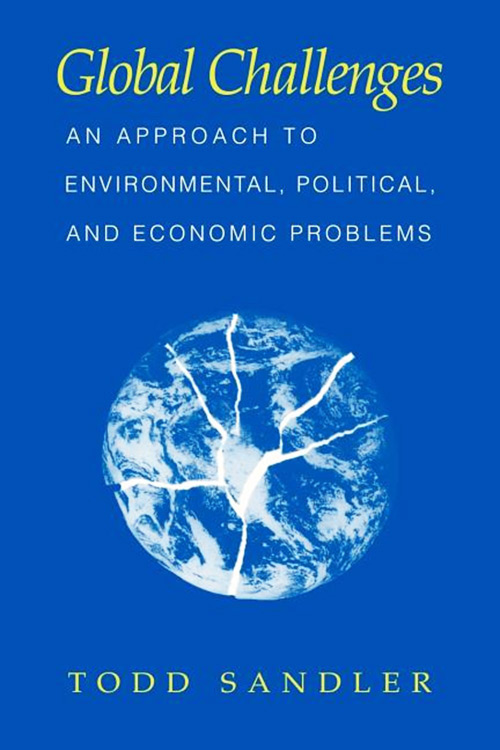 Global Challenges
An Approach to Environmental, Political, and Economic Problems
Todd Sandler
Hardcover Paperback
This book review appeared in the Summer 1998 issue of The Independent Review.

On the first page of his new book, Global Challenges, Todd Sandler declares that it is “market failures that are behind many of the crises confronting the world today.” He lays out the standard failures: externalities, public goods and free riders, and open access arising from property-rights failures. The crises are also familiar: the buildup of greenhouse gases, acid rain, tropical deforestation, loss of biodiversity, depletion of the stratospheric ozone shield, population growth, and soil loss. Besides environmental crises, Sandler lists nuclear proliferation, transnational terrorism, and income inequality among nations. Will technology save us? Technology is a “two-edged sword” (p. 7), bringing new problems even as we try to use it to improve our lives.

Sandler, an economist at Iowa State University, is not entirely pessimistic. “The purpose of this book is to use modern tools and concepts of economics to put global and regional challenges into perspective” (p. 21). Nations, he indicates, could potentially solve these problems by cooperation; for example, by forming governmental entities at the supranational level or by entering into global and regional treaties. He notes that “effective action can be fostered if the participants’ incentives are kept in mind.” Incentives for whom? “Nations are assumed to behave to further their own interests, not the good of the world. If world welfare is to be furthered by a collective response, then there must be sufficient gains in such actions to motivate the participants” (p. 22). Sandler does not explain what the goals of a nation are or how national leaders weight the differing goals of the citizens. In most of the rest of the book, the nation—not the individuals or firms that cause the market failures—is the unit of analysis. Sandler is “concerned with how nations are likely to confront the challenges on the horizon and whether institutions could be tailored to their selfish behavior to avert disaster” (p. 22).

In chapter 2 Sandler introduces strategic action, the prisoners’ dilemma, and other elements of game theory in the context of environmental and other crises. Market failure is further explained, and international spillover effects are shown to be possible results. The author’s self-described “pragmatic approach” is to ask how nations can collectively resolve those dilemmas. “By identifying what promotes and inhibits collective actions among these calculating nations,” he shows “which global issues pose the greatest challenge” (p. 51).

In chapter 3, “For Our Children’s Children,” Sandler explains that benefits and costs to future generations are underrepresented by the use of discounting procedures, in the sense that a dollar’s worth of benefits today is counted more heavily than the same benefit accruing to a later generation. Various possible ways in which the present generation might have a reason to promote “farsighted collective action” are discussed.

In chapter 4, “Global House,” Sandler discusses how national governments are sometimes stirred to collective action, either regionally or more broadly, as in the case of banning chlorofluorocarbons (CFCs). The failure (as Sandler was writing) of nations to agree to reduce greenhouse gases, and thus to reduce the risk of future global warming, he explains by reference to factors such as the differences of scientific opinion and the complexity of monitoring and controlling emissions. Acid rain and transnational terrorism are also discussed in the context of the prisoners’ dilemma and other game-theory constructs. Sandler stresses the need for each cooperating nation to perceive net gains to itself from any activities in which it participates.

Will repeated interactions among nation-states lead to cooperation? Chapter 6, “Change We Must: Evolutionary Concerns,” pertains to cooperation and noncooperative strategic behavior in the context of repeated games and evolutionary games. In the latter, as a result of past patterns of wins and losses, “strategic choices are programmed by the player’s genetic code and are not a conscious choice” (p. 173).

The causes and consequences of the growing income inequality among nations receive attention in chapter 7, “Equity among Nations?” (“Equity” and “income equality” seem to be interchangeable terms for Sandler.) Inequality may complicate cooperation, but there are certain benefits: “Best shot” technologies, such as finding a cure for a plague or recovering a sunken nuclear submarine, are likely to be undertaken by the richest nations to the benefit of all. Then, too, “there is a strategic benefit to being poor, because poverty facilitates free riding” (p. 194). But when the weakest link among cooperators is critical, as in controlling terrorist groups, inequality reduces the chance of successful cooperation. A single cheater, paid or otherwise, might defeat eradication efforts. Another problem, says the author, is that poorer nations might utilize weak environmental laws to attract industry.

The eighth and final chapter of the book provides summary comments and draws together the author’s key conclusions. The last paragraph begins, “The world is, indeed, besieged by global challenges requiring collective action” (p. 214). But Sandler is optimistic that, if leaders pay attention to the game-theory conclusions he puts forth, they can solve or at least reduce the effects of these crises.

Global Challenges should be interesting to anyone eager to spend time thinking about strategic factors in a search for cooperation among nations when a serious cross-border externality exists. It offers some interesting insights about how to anticipate some of the serious difficulties faced by anyone who seeks solutions to perceived global challenges, although many of those insights are unsurprising. The book is clearly written, in the main, seldom lapsing into game-theory jargon without sufficient explanation of terms. There is virtually no mathematics to trip up the nonmathematical reader.

The book cannot be recommended as a reasonable overview or description of the international “crises” described in it, at least where the environmental problems are concerned. It is essentially a brief for more and stronger collective action, with discussion of the hindrances to be expected along the way. To Sandler, scientific uncertainty is confined to questions about the precise size and placement of the various types of horrible destruction that we face if calls for collective action are not heeded or if collective action proves unsuccessful. For example, the idea that the buildup of certain greenhouse gases, which clearly is happening, might not be driving the little bit of global warming we have seen in the past century, or might not lead to catastrophe if unabated, is not considered in the book, even though the pages of Science and Nature are filled with debates among scientists on these issues.

In his final paragraph Sandler writes, “Although the news media have characterized the world as facing imminent disaster from insidious pollutants, ghastly viruses . . . and bloodthirsty terrorists, I have taken a more-reasoned approach.” But his reasoning is harnessed to the task of finding ways to impose collective solutions on these problems. Like the news media he mentions, his reporting of the facts on the global crises, or at least the environmental crises, is one-sided. As an example, he speaks of “good ozone” (in the stratosphere) and “bad ozone” (at the earth’s surface) without mentioning that surface ozone, though indeed troublesome in the ways he indicates, also shields us from ultraviolet rays just as stratospheric ozone does. Similarly, although the expected warming effects of carbon dioxide emissions are described and decried, the direct benefits to plants (and the animals they feed) of added carbon dioxide in the air are not mentioned. Yet in fact, this “greenhouse gas” is purchased by the owners of greenhouses, because carbon dioxide is plant food. Nor does Sandler mention, as an economist seeking to maximize net benefits should, that more carbon dioxide reduces the requirement of most plants for water and enhances their resistance to drought. In fairness, I note that he does once mention the sometimes beneficial impact of warming on agriculture.

The environmental news is good and bad. Sandler reports the bad at length but says next to nothing about the good. Nor does he deal with the serious scientific doubts about the bad. If the temperature of the earth rises by, say, three degrees Celsius over the next century, will sea levels rise or fall? Scientific journals carry debates on the topic, which is key to global warming fears, but Sandler simply assumes the worst.

The economic thinking in this book also seems rather one-sided. Pointing out the potential problem of irreversibility if the climate warms due to human activity, Sandler overlooks that large sacrifices now, taken to counter a problem we later find to be nonexistent or unresponsive to our sacrifices, impose a large, known, irreversible penalty on our heirs. Passing up a $1,000 investment now, to purchase $1,000 worth of reduced carbon dioxide emissions, means passing up a $117,000 benefit that could be received after fifty years (at a 10 percent rate of return, which is low for the stock market over a fifty-year period); or a loss of the $13,689,000 that could be had after one hundred years. Which choice on our part would our heirs in a hundred years prefer? The “irreversible” label can be applied to aspects of almost any policy, not just to changes in nature.

Sandler has some interesting things to say, derived from game theory, about how and where collective action might be imposed on the citizens of the world in response to a perceived crisis involving cross-border externalities. But he works hard, in a one-sided fashion, to stoke the perception that certain “crises” are real and will have terrible consequences unless the strategies he suggests are used to help craft collective controls on citizens of the world. Adopting that strategy will clearly impose costs on us now; it may help or harm future generations. At present, with regard to the environmental “crises” Sandler discusses, we simply do not know.